Lucia Love depicts fire and water, with their destructive and healing elements, in myriad ways in Firewater, an exhibition of a series of seven paintings at The Ice House in Garrison that opens Saturday (Oct. 17).

Although unplanned, the works seem to reflect the jagged emotions and fears of the moment. “I’ve been using the subject matter for years but people are ready to see what’s actually going on,” Love says. “It’s been strange to see how much more willing people are to have these conversations, like ‘Yes, the world really is on fire.’ ” Before the pandemic, Love says, a more typical reaction was, “Oh, monsters, that’s weird.” 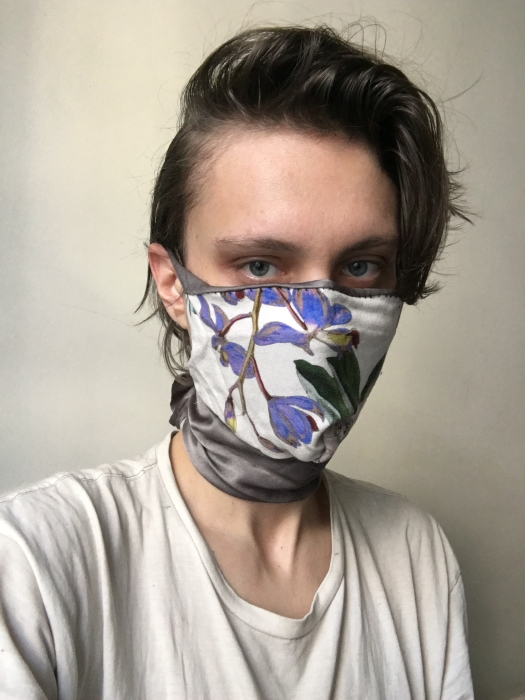 Speculative fiction, myths and the fantasy genre have always been part of Love’s realm. “The connection to myths is always present,” the artist says. “It’s always something that has given me permission to make this work, this lineage of visual and written worlds that are analogous to ours. I want to build the metaphors in that speculative reality that sci-fi gives to you, but these fantasies I make as an extension of reality. I’m trying to process it and deal with heavier feelings of, for instance, powerlessness.”

Love, who lives in Brooklyn and studied painting and animation at the School of Visual Arts with a grant from Jasper John’s Foundation for Contemporary Arts, notes that “there are a lot of different mediums that go into the process: written backstories of the characters, different drawings, sculptures of the characters. It mixes together and is added to different things taken from the news culture’s omnivorous way of taking in information. In building the narrative, some things are attached to something real in history, while other things are atemporal, and you have to piece together what the sequences are.”

In many of the works, there is a central character known as The Water Carrier, a figure Love has used for years. “She’s a character I can attempt to weave issues around: particularly what liberation means, or meant, in a feminist lens,” the artist says. “I made a character who is in a kind of bondage, shackles, forced to have a cup balanced on her head — there’s this cultural thing; in many places women are tasked with shuttling water from a source into their towns, and what’s my position in this? What is gender? Are you tied to gender? What are the shackles of gender? 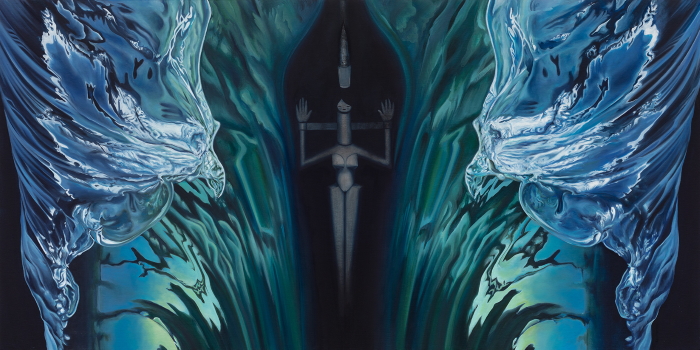 “Lady of the Lake”

“I started painting this character in 2013 or 2014, following her through steps of liberation: how do you get yourself to another place? The earlier paintings show struggles, with no answers, but comedic slapstick going on. Firewater has a lot more traction. The character, the main story arc, can be seen in the painting ‘Lady of the Lake.’ She’s in this meditative state, with a crossbow shackle device on her but she has such focus it seems as if she’s controlling the elements around her. It’s within her mind that she has gained power, and through meditation she can change the world through these elements.”

Love doesn’t consider any of the characters to be self-portraits. “I don’t ever think of it as me. It’s more like a thought experiment,” the artist says. “It’s dealing with a lot of American ideas: the house of cards, the precarity that we’re in; and of course, there are floods and there are fires.” The paintings “aren’t meant to be didactic. I’m focused on legibility in the work, as a means to show somebody something that they can process. I know what I was thinking, making the paintings, but I want there to be enough impact in the work to stay with it. When you put a lot of time into something it invites the viewer to do the same.”

The Ice House is located at 17 Mandalay Drive in Garrison. To view the exhibit, make an appointment at jdj.world or text 518-339-6913. Masks and social distancing are required. It continues through Dec. 19.