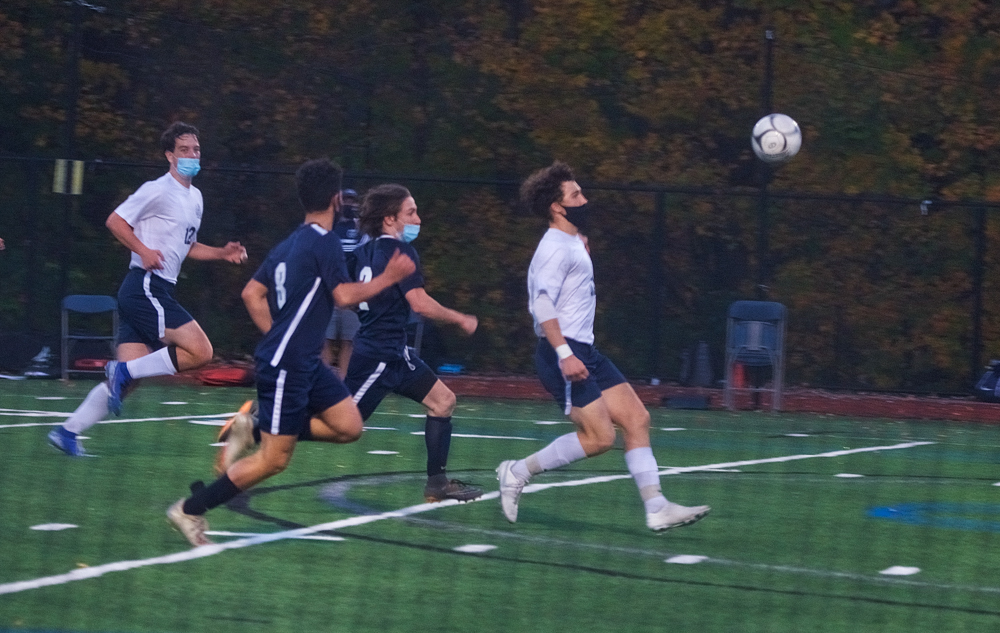 Beacon’s Dillon Kelly (right) breaks out in front of the Lourdes defense. (Photos by S. Pearlman)

The Bulldogs broke out of the gate in strong fashion Wednesday (Oct. 14), scoring twice early and never letting Our Lady of Lourdes into the game in a season-opening victory in Poughkeepsie.

Beacon jumped to a 2-0 lead 10 minutes in. Both goals came on headers off corner kicks, with Tommy Franks finding Derek Bilyeu on the first and Dillon Kelly on the second. Warren Banks scored Beacon’s third goal.

“Dillon at center back did a fantastic job for us,” said Coach Craig Seaman. “That’s not his normal spot, and he completely dominated. Chase Green at left back wreaked havoc. And Alex Wyant at center mid, with Tommy, did well dictating the pace.

“This season does not have a normal rhythm; nothing is usual,” the coach added. “There are some things for us to clean up, but we can take care of that during the season.”

The Bulldogs are scheduled to visit Arlington on Monday (Oct. 19) and host Peekskill on Tuesday.

The Blue Devils did a lot of things right in their season opener at home on Tuesday (Oct. 13) against North Salem but they couldn’t find the net in the second half. 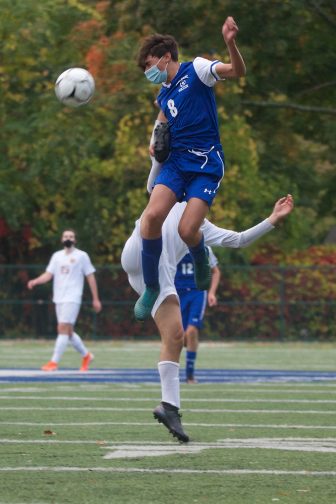 North Salem went up 1-0 midway through the first half, but Haldane tied it with five minutes left when Max Westphal finished an assist from Clement Grossman.

“That was a nice goal from two freshmen,” said Coach Ahmed Dwidar. “We got a nice cross from the right side, it deflected off the defense and Max found it in the box and finished.”

The Tigers scored with six minutes left in regulation when a high pass got over the Blue Devils’ defense, leading to a one-on-one against Haldane keeper Ronan Kiter. North Salem scored an insurance goal with 2:40 on the clock.

Dwidar said his team “ran out of steam a little bit at the end. But I saw fire in them; they played together as a unit. They did everything that was asked of them. We just had trouble finishing some opportunities.”

He noted that captain Andrew Silhavy picked the team up, and that Matt Silhavy, an eighth grader, started. Frank Bentkowski had a solid game, as well, he said.

“Playing the game with a mask on was not a problem at all,” he added.

The Blue Devils were scheduled to host Peekskill on Friday (Oct. 16) and Lourdes on Monday.