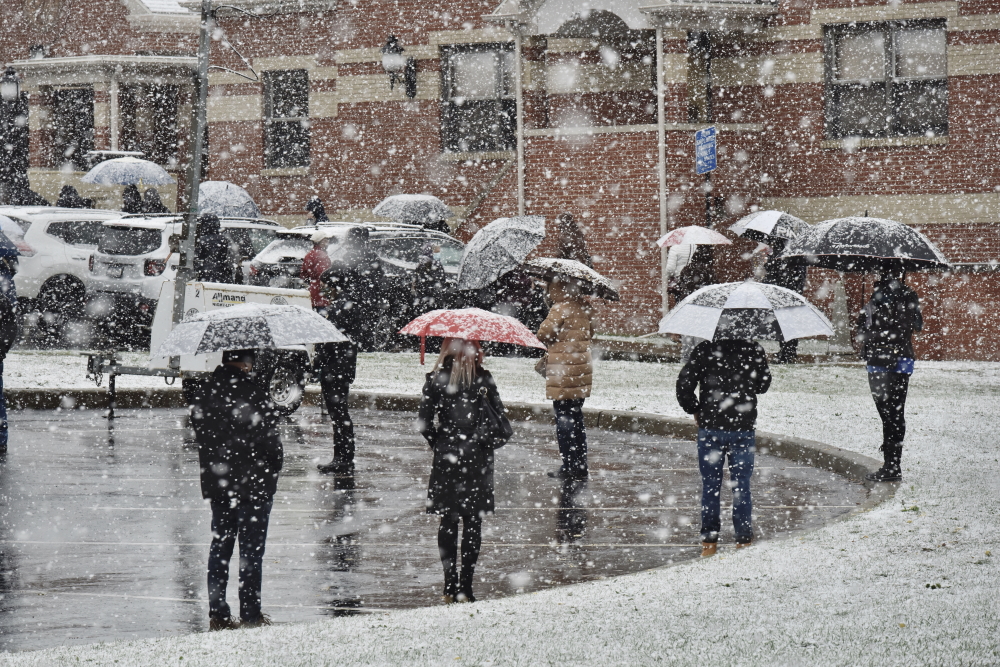 Voters wait in line on Friday (Oct. 30) at the early voting site at Fishkill Town Hall. (Photo by Guy Peifer)

Voters in the Highlands braved long lines at early voting sites in Carmel and Fishkill last week, with many waiting as long as four hours to cast ballots ahead of the Nov. 3 general election.

More than 80,000 people had voted by the end of the day on Monday (Nov. 2) in Dutchess and Putnam counties, either in person or by returning an absentee ballot, according to election officials.

State law requires counties to have one early voting site for every segment of 50,000 voters, although election commissioners can choose to have more. Putnam was required to have one site, which was located at the Board of Elections office in Carmel. The Dutchess commissioners, who needed at least three, set up five, including one at Fishkill Town Hall on Route 52 near Beacon.

As of 6 p.m. on Sunday (Nov. 2), the Dutchess County Board of Elections reported:

As of 5 p.m. on Sunday (Nov. 1), the Putnam County Board of Elections reported:

Early voting ended today (Nov. 1). The weather across the state was better for those waiting in line on Saturday and Sunday from the preceding cold and rainy days. The forecast for Election Day is partly cloudy with temperatures in the 40s, with no rain expected.

Catherine Croft, who is the Democratic election commissioner for Putnam, said on Wednesday that she had argued for at least two early voting sites but her Republican counterpart, Anthony Scannapieco Jr., felt only one was needed. The commissioners must agree for more than the minimum to be created. 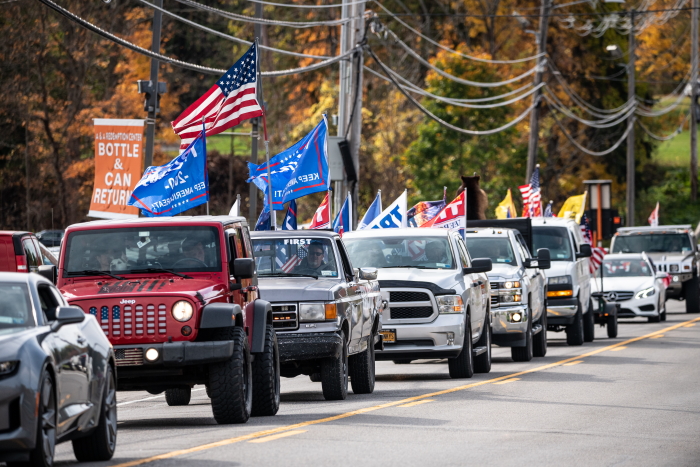 A line of vehicles with Trump banners drove by Fishkill Town Hall on Sunday (Oct. 25) where voters were waiting in line to vote. (Photo by Alejandro Lopez)

Scannapieco, who is also chair of the Putnam County Republican Party, said in an email that election officials all over the country have been dealing with heavy early-voting turnout.

How to Vote by Mail (Procrastinator’s Edition)

If you are registered to vote (the deadline to register for the Nov. 3 election has passed), you can apply in person at the Board of Elections on Monday (Nov. 2) to receive an absentee ballot.

On the application, select one of six reasons for your request, such as that you will not be in the county on Election Day or that you have a “temporary illness.” The definition of the latter now includes “being unable to appear due to risk of contracting or spreading a communicable disease like COVID-19.”

Submit the signed form to receive your ballot. Complete the ballot and slide it into the envelope provided. Unless you sign and date the oath and the envelope containing the ballot is sealed, it will not be counted.

If you already have an absentee ballot in hand, it must be postmarked on or before Tuesday (Nov. 3). Or it can be dropped off at the Board of Elections or at the polls on Election Day.

To check the status of your submitted ballot, visit putnamboe.com or bit.ly/dutchess-status.

“Since Saturday [Oct. 24], every day has been like Election Day for us,” Croft said of the BOE staff. “The phones have been ringing off the hook.” Despite the long waits, she said most people have been “happy and so excited” to cast their vote.

The turnout in Putnam for the 2016 presidential election was 78 percent, with 48,563 votes cast. The number of active registered voters in the county has risen 15 percent since then, to 69,409, mostly among Democrats.

Where to Vote on Election Day

Polls will be open on Tuesday (Nov. 3) from 6 a.m. to 9 p.m. To verify you are registered and locate your polling place, visit voterlookup.elections.ny.gov. Check highlandscurrent.org after 9 p.m. for unofficial results (not including absentee ballots).

In New York, absentee ballots can be postmarked up to and including the day of the election and received by the Board of Elections up to seven days after the election. They also can be dropped in person at the Board of Education or on Election Day at a polling site. The Putnam BOE planned to begin counting its absentee ballots on Monday (Nov. 9) and Dutchess on Tuesday (Nov. 10).

Croft said voters who chose to stand in line could instead have applied at the BOE for an absentee ballot (the deadline for mail requests has passed), but that many preferred to vote in person so their votes would appear in the Election Day tally.

City: Not Our Truck

Anthony Ruggiero, the city administrator for Beacon, said on Monday (Nov. 2) that he had received inquiries regarding a fire truck that was part of a Trump caravan that drove through the city on Sunday. He said that the truck did not belong to the city and that the fire department was not involved in the caravan.

“The truck was a privately owned fire truck,” he said in a statement. “It was an E-ONE brand pumper, which the City does not and has not owned. There were no lettering and no red lights on the apparatus.” It also had license plates, and “city firetrucks do not by law have license plates.”