The pandemic’s effect on education could be felt for years, as New York State struggles to balance its own budget while continuing to provide essential aid to public school districts.

Haldane and Garrison are far less dependent on state aid than Beacon because of their relative wealth and larger tax levies, but in Beacon, state funding made up 45 percent, or roughly $30 million, of the district’s 2020-21 budget.

The state aid formula is based on districts’ ability to generate revenue through property taxes. Haldane’s 2020-21 budget relied on about $3 million in state aid, or 12 percent of its budget, while Garrison’s was $881,000, or 8 percent.

However, said Julia Sniffen, the principal of Haldane High School, any cuts in aid are going to be significant because of the costs incurred by schools to provide both virtual and in-person instruction, as well as COVID-related equipment.

At Garrison, where the parents of 48 of the district’s 215 students initially elected to go all-virtual, the school board voted this past summer to spend $500,000 on an online tutoring system with state-certified teachers for 2020-21.

Garrison Superintendent Carl Albano said this week that he’s optimistic that a federal stimulus package will be passed to boost state coffers in New York and elsewhere. If not, “there would be an impact here, but for all schools, especially higher-need districts, I’m hopeful that the federal government will support education and the states.”

Beacon’s 2020-21 budget was based on the state’s forecasting in its own budget, which was adopted in March, just as the pandemic hit the U.S. But as a result of a $14 billion revenue decline due to the spread of the virus, New York State in August announced it would withhold 20 percent of its aid payments to school districts. 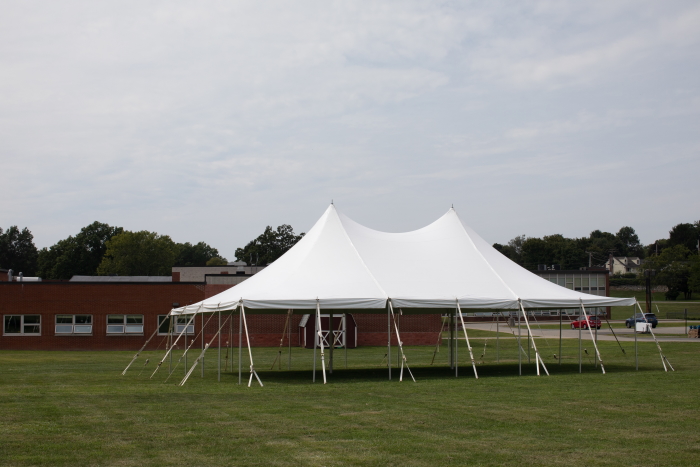 Beacon and other districts erected tents so that students could attend classes outside until the weather turns. (Photo by Meredith Heuer)

In Beacon, a freeze that significant could affect cash flow, said Ann Marie Quartironi, the district’s deputy superintendent. The district has not had to borrow to pay its bills since Quartironi has been there, but if it did, it would likely take out “revenue anticipation notes,” or short-term loans similar to the bonds school districts use to finance capital projects.

Quartironi said that the Beacon district had increased its fund balance by the end of the 2019-20 school year in anticipation of diminished aid in the current academic year and beyond.

If the financial situation gets really bad, the district would have to make cuts to its budget, with staffing the first area to reduce, although “it’s never something we want to do,” Quartironi said.

About five or six teachers are on schedule to retire next year, she said, and a handful of others could choose to retire. If cuts become necessary, the district will see if those positions can be left unfilled, Quartironi said, before considering layoffs and, in a worst-case scenario, programming cuts.

School districts in New York typically begin hearing whispers at the end of a calendar year about the amount of aid to expect in the upcoming state budget. Beacon has received increased funding in each of the last three years, and while even a flat aid package for 2021-22 would be satisfactory, “I have a feeling it’s going to be less,” Quartironi said.

A state budget representative would offer few details this week, saying only that New York’s 2022 fiscal budget “will include school aid funding for the 2021-22 school year and will be negotiated with the Legislature for an April 1 deadline, as is done every year.”