Matt Landahl, the superintendent of the Beacon City School District, may have had more of an idea than most that something was afoot before the COVID-19 pandemic hit U.S. soil early this year. But he said no warning could have prepared him for what has unfolded in the Highlands over the last eight months.

A college friend who works for the U.S. Department of State was stationed in Italy, one of Europe’s most dangerous hot spots during the initial spread of the coronavirus. At the end of February, Landahl recalled last week, his friend sent a text message that read: “Get ready. This is really bad.”

After the first positive cases were reported in New York in March, a team of Dutchess County school administrators began discussing how to proceed. Their first meeting, Landahl said, focused on handwashing.

By the second week of March, the county executive, Marc Molinaro, had joined the call, and the discussion progressed to preparing for school closures and the deployment of laptops and other materials to students.

Friday, March 13, was scheduled as an off-day for students in Beacon and a workday for teachers. But Molinaro had announced the first positive COVID case in Dutchess on March 12 — Putnam’s would come three days later — and, by March 16, Gov. Andrew Cuomo had closed public schools statewide for two weeks.

“I felt a closure would be happening on some level,” Landahl said. “I knew something big was happening,” and during the meetings with other superintendents, “it started to crystallize what we needed to prepare for.”

Cuomo made subsequent announcements of two-week closures until, on May 7, he said schools would not reopen until the fall. 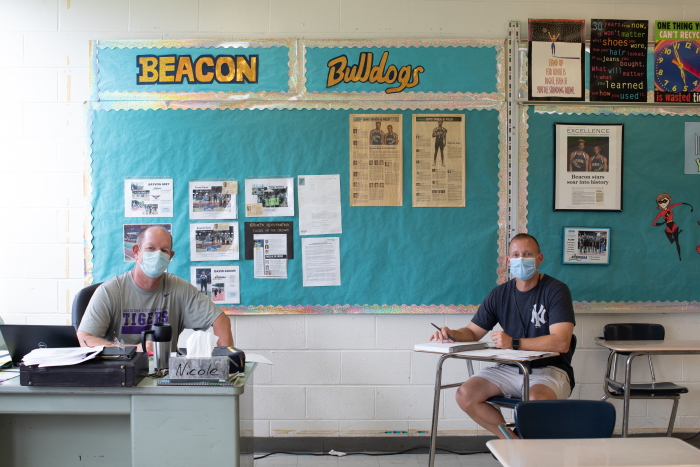 Since that Friday the 13th, COVID-19 has been “on everybody’s mind every single day,” Landahl said, noting that he took an “alleged vacation” with his family in August and conducts text-message meetings with district staff frequently on Sundays.

While the Class of 2020 graduated in virtual ceremonies and other socially distanced events, administrators in the Highlands were already planning for reopening in the fall.

The Garrison district, because of an abundance of space, was able to bring all students who chose the option back in person. Haldane also had enough space to bring elementary and middle school students back in person, while the high school is on a hybrid two- or three-day a week in-person schedule.

“The challenge over the summer was coming up with those three different schedules,” said Carl Albano, the Garrison superintendent. “Typically, we start scheduling in the spring and you refine it over the summer.”

But to meet Cuomo’s deadline, “all of them needed to be developed in a very short period of time,” Albano said, while, in the case of the all-virtual model, attempting to improve on what had been thrust upon the schools in the spring.

After reopening in September, the Garrison, Haldane and Beacon districts each had made it through the first six weeks of the year when Landahl announced a positive test at Beacon High School on Oct. 28. Later that afternoon, he announced a second case at the high school and an initial positive test at Rombout Middle School. On Oct. 31, a case was confirmed at J.V. Forrestal Elementary School, as well as on Thursday (Nov. 5) at South Avenue Elementary.

With about 2,800 students, Beacon is the largest, by far, of the three Highlands school systems. In most school officials’ minds, it was a question of when, not if, a positive test would show up. 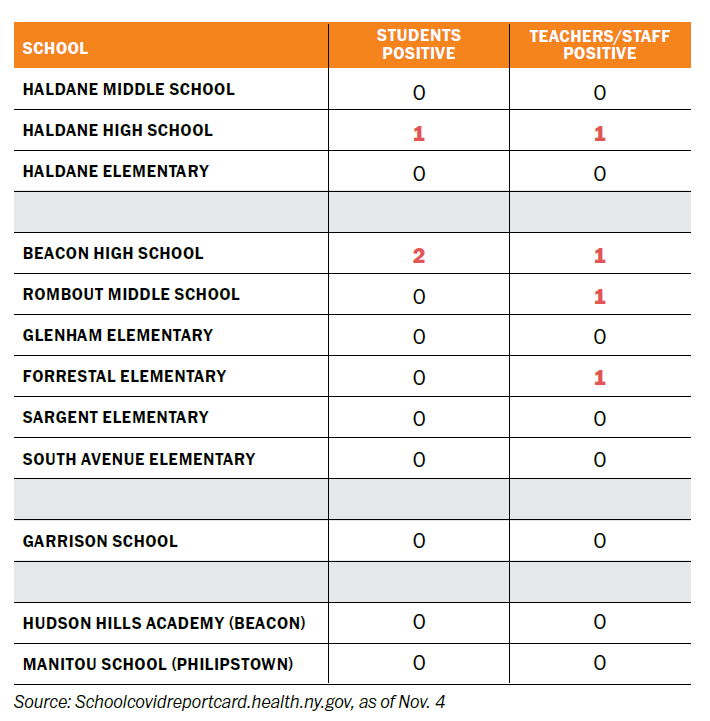 The individuals — the district cannot release identifying information due to federal privacy laws — are quarantining while officials conduct contact-tracing studies. The middle and high school were closed until Thursday (Nov. 5), with students pivoting to an all-virtual schedule. Forrestal is scheduled to reopen on Nov. 12; South Avenue remains open because of limited exposure to the individual there.

The infections don’t indicate a failure in Beacon, Landahl said, but that the protocols set in place in the district are working. Clusters of cases that aren’t contained by quarantining, daily temperature checks, contact tracing and other measures would signal a breakdown in the system, he said.

“Our students and staff have done a great job adjusting to the health and safety protocols,” the superintendent said. “I never thought students would wear masks this well. We have a lot of people making a lot of sacrifices.”

Teachers and administrators this fall have sought to provide as near-normal an educational experience as possible, said Julia Sniffen, the Haldane High School principal. With Haldane elementary and middle school students in school five days a week, except for families who’ve chosen to go all-virtual for health concerns or other reasons, instruction has gone smoothly, she said.

But for high school students, “there is an added layer of pressure now at that level to get them the breadth” of the curriculum needed to prepare them for Regents exams, year-end standardized tests which were canceled last spring. (On Nov. 5, the state Education Department announced the cancellation of the January Regents. No decision has been made on the June and August tests.)

“The teachers are struggling to get through the content,” Sniffen said. “Their pacing is definitely slower than it has been in the past.”

Nonetheless, the principal said, after working all summer, the district has improved upon lessons learned in the spring.

“We were in full-on crisis mode,” after Cuomo shut the schools down in March, she said, which led Haldane officials to temporarily adopt a “do-no-harm” policy through the end of the academic year.

As in many other school districts, attendance requirements were relaxed and grading was not as strict during the shutdown. But since reopening, Haldane teachers have returned to traditional grading scales, while students must log in at the beginning of each class if they’re attending virtually.

“Whether you’re at home or you’re here, you’re at school,” Sniffen said. 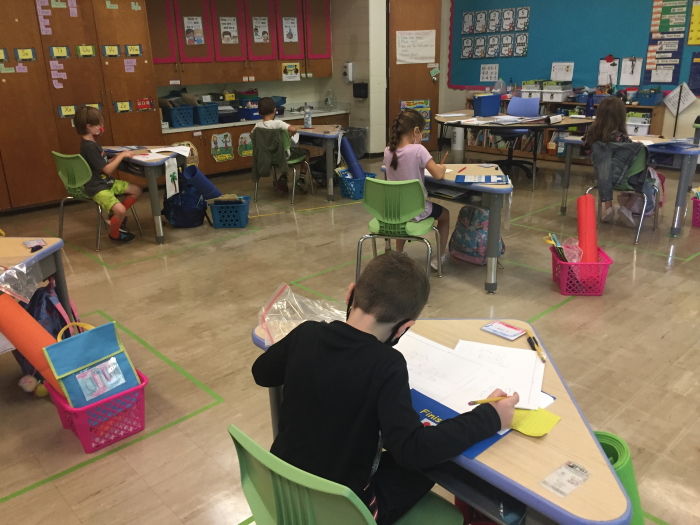 Inside a classroom at the Garrison School, where students attend daily unless their parents or guardians opted for all-virtual learning. (Photo by Maria Slippen)

In Beacon, teachers also began planning with Landahl and other administrators for reopening early in the summer.

Whereas last spring was about deploying — laptops, wireless hot spots and even free groceries, along with volunteers from Mutual Aid Beacon — the fall has been about anticipating, Landahl said.

Enduring the spring shutdown led the district to buy 25,000 disposable masks and other personal protective equipment in June. Air-circulating ventilation systems were installed in district school buildings and additional hot spots for free distribution to students without reliable internet access at home were purchased.

“The thing we keep saying is we’re trying to seek out the next thing to prepare for, to stay one or two steps ahead,” Landahl said. “None of it’s a surprise anymore.”

The district’s 276 instructors have risen to the challenge as well, said John Burns, the president of the Beacon Teachers’ Association.

“I don’t know if I could do this,” said Burns, who retired from the classroom in 2016 but continues to lead the union. “They’re putting forth an amazing effort. Everybody’s in it and everybody’s positive but, at the same time, the demands on time and technology are overwhelming.”

Haldane parent Christine Johanson said this week that her daughter, a 10th grader, has responded well to the hybrid schedule.

“She loves it,” Johanson said. “I think back to when I was in high school — what would be better than two days on, two days off?”

The on-off schedule provides balance and a degree of normalcy, which Johanson called a best-case scenario considering the alternatives. With independent reading and research assignments, her daughter is “busy most of the day, if not a little bit more” on her virtual days, although Johanson also worries about students meeting all of the state’s curriculum goals.

“My daughter is a good student, so in that sense we’re lucky,” she said. “But I can only imagine the teachers are having a tougher time with some students. There is a huge risk of falling behind.”

Only a matter of time?

The Mid-Hudson Region’s COVID-19 infection rate on Wednesday (Nov. 4) was at 2.4 percent, after hovering closer to 1 percent for much of the summer. In the past week, Dutchess and Putnam counties have both been under 2 percent.

Still, given the temporary closures in the last week in Beacon, and the tremendous spike in cases nationwide, it’s hard not to ask: Is it only a matter of time before the virus spreads further and Cuomo shuts schools down again? 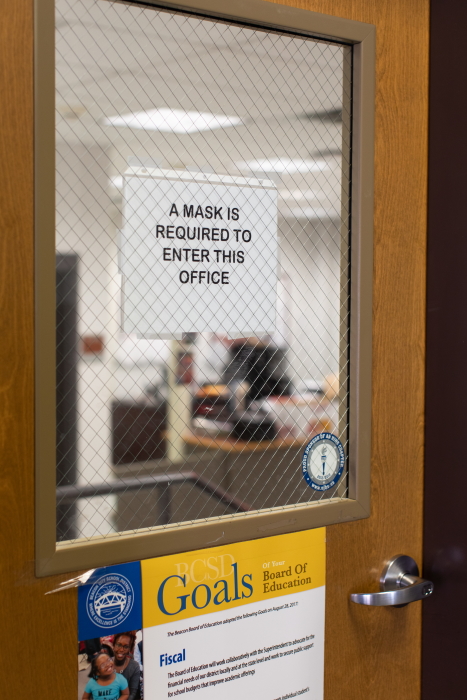 Gov. Andrew Cuomo said on Oct. 28 that counties, through their health departments, will be allowed to impose mask mandates in public and private schools. (Photo by Meredith Heuer)

“You see record-breaking positivity rates across the nation, and even though New York is still comparatively low with infections, experts are calling for exponential growth with the virus this winter,” Albano said. “You combine all these things and you do kind of feel that you’re on borrowed time.”

Before the announcements of confirmed cases in Beacon, Landahl said he’d heard rumors that the district planned to shut down in January or February. No one’s planning that far ahead, he said.

“We’re taking this a day at a time,” he said. “We may have new information on any given day that changes our thinking.”

“There’s a majority of teachers who want to be at school,” added Burns. “Some have said that we’ll be gone by the end of the year, but most of us are trying to make this work. We’re not panicking.”

The day that schools close again may come, but Sniffen said she doesn’t regret the push last summer to reopen in person, even if it’s only temporary.

“You look at students and you recognize that school can be a constant for them,” she explained. “Seeing them and connecting with them helps you evaluate what they need. The academic piece is at the forefront of what we do, but their social and emotional needs are also at the forefront right now. Seeing them — it makes every sleepless night worth it. It makes every meeting worth it, to know you’re doing everything to support them the best you can.

“I don’t leave every day in a bad place,” Sniffen said. “I leave most days saying, ‘We made a difference.’ ”