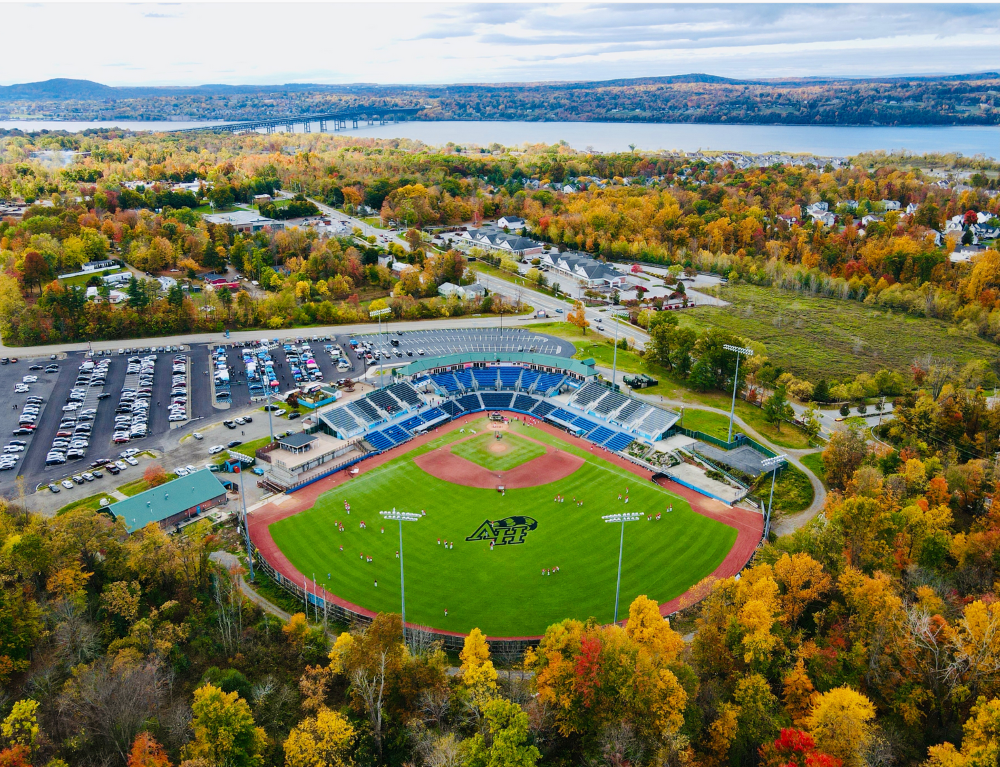 The Renegades play at Dutchess Stadium on Route 9D outside Beacon. (HVR photo)

The Hudson Valley Renegades will change their affiliation starting in 2021 from the Tampa Bay Rays to the New York Yankees. The Renegades also will move up a level in professional baseball’s minor leagues, from short-season to Single A, and begin their season in April instead of June.

The Yankees made the announcement on Saturday (Nov. 7). The team signed player-development deals with the Renegades and the Somerset Patriots, a team in central New Jersey, while ending their affiliations with minor-league teams in Trenton and Staten Island.

The Renegades, who have played at Dutchess Stadium on Route 9D just outside of Beacon for 26 seasons, had been part of the Class A, short-season league, the fifth of six levels in the minors. They had partnered with the Rays since 1996, but their most recent contract expired this year. There were no games played in 2020 in the minor leagues because of the pandemic shutdown.

The Renegades will now play in April and May for the first time in their history, jumping from about 75 games beginning in mid-June to something closer to 140. The season will still end in early September.

The changes are part of an agreement between major- and minor-league baseball that will shrink the number of minor-league teams from 160 to 120 nationwide, with many short-season and rookie teams being absorbed into what will be known as the Prospect Development Pipeline.

The short-season New York-Penn League, in which the Renegades played from 1994 through 2019, has been eliminated.

The Renegades in 2018 agreed to a five-year extension of their lease with Dutchess County of the 4,500-seat stadium after the Legislature approved $2.4 million in bond funding to make repairs and upgrade the facility. In 2019 the club unveiled new stadium chairs with backs and, in some sections, seat cushions, and the concrete seating bowl and other surfaces were repaired throughout the ballpark.

The Beacon school district, which owns the 21 acres of land beneath the stadium, earlier this year extended its $29,000 annual lease with the county through August 2021. The board is expected to discuss selling the property, which it has rented to the county for more than two decades.

The Yankees, in a statement, said they considered moving their High Single-A affiliate to Staten Island instead of the Hudson Valley. “However, as the number of our minor-league affiliates have been limited, we did not have the confidence that the organization could continue to allow us to develop our players in the best possible way, especially since the team would have to transition into a full-season Single-A affiliate,” it said.

“The determination was made that the Hudson Valley would be best for our players, especially given the long-term and tremendously beneficial relationship we have had with Marvin Goldklang [owner of the Renegades], who is a longstanding partner and associate of the Steinbrenner family and the Yankees,” the team said. “The Goldklang Group operates Charleston — our Low Single-A affiliate from 2005 through last season — which will no longer fall under the Yankees’ minor-league umbrella. Additionally, Rookie-Level Pulaski [Virginia] will not be part of the Yankees’ minor-league system.”