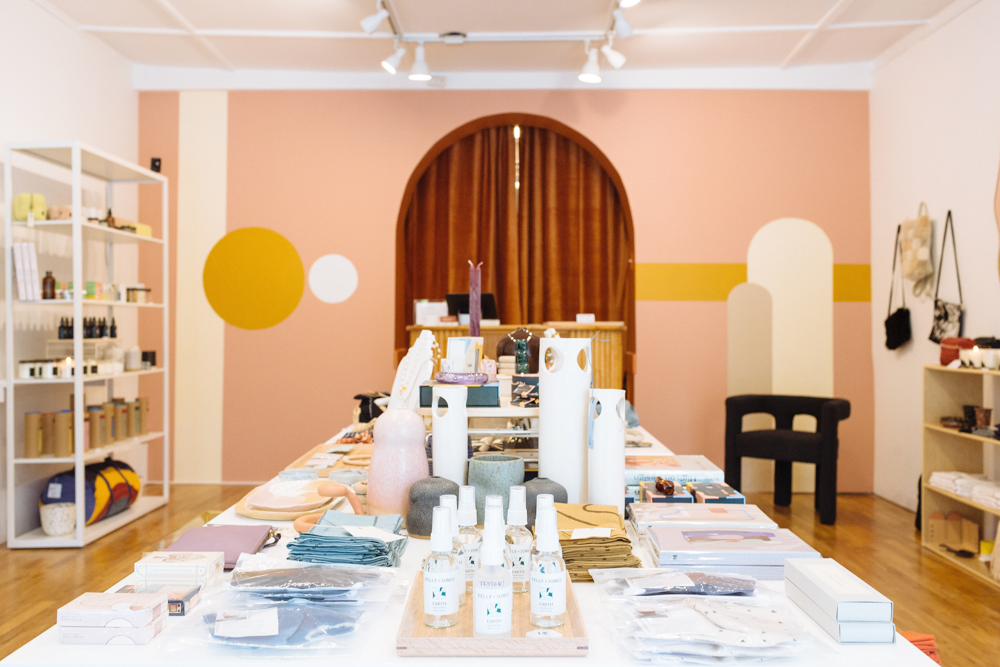 The centerpiece table at Berte (Photo by Jennifer Young)

While The Snooki Shop at 508 Main St., a clothing store owed by Nicole Polizzi of Jersey Shore fame, got a lot of attention before its Nov. 1 opening, three other retailers have also planted flags in Beacon in the past few weeks. 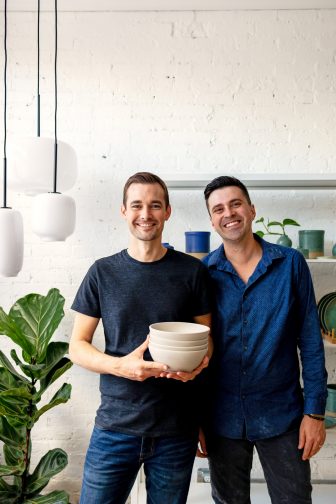 Rick Holbrook, a potter, works in sets of four. That’s how he grew up, he says, with his mother, father and sister, Shannon, “connected to family and sitting down to a meal together. I was a quiet child who kept to myself and fell into my creative being.”

Most of that growing up was done on Afton Road in Danville, Virginia, which became the name of his pottery store.

He began studying the form in college, although his focus was photography, which he made into a career. Pottery was a hobby until he and his fiancé, Todd Hulet, moved to California. There, Holbrook became a member of an artists’ community called Muddy’s Studio. Holbrook often used his pottery in his editorial and commercial photography assignments.

Holbrook and Hulet, who is a composer and theater teaching artist, launched an online store, largely in response to a steady stream of requests for the pottery when people saw it in Holbrook’s photos, such as on recipe cards distributed by the Blue Apron meal-delivery service.

The couple moved to Beacon three years ago because they missed the East Coast but did not want to live in a large city. “We love the support for artists here,” Hulet says. They closed the online store because Holbrook was focusing on producing custom orders for photo shoots for marketing campaigns and magazines.

But Holbrook missed having his work accessible to the general public, and he and Hulet decided that Beacon needed a Main Street pottery studio. “I had always wanted a store, but never had time,” Holbrook says. “We’d been talking about it for eight years, discussing what it would look like. As soon as we moved to Beacon, it was like ‘Oh, this is a town where this could happen.’ ”

Because of the pandemic shutdown, Holbrook was receiving fewer photography assignments, and Hulet was working at the Poughkeepsie Day School, which closed. Interest rates were also at record lows, allowing them to create a business plan “that actually works,” says Hulet, who is handling the legal and business ends of the shop. They rented the space formerly occupied by Catalyst Gallery. 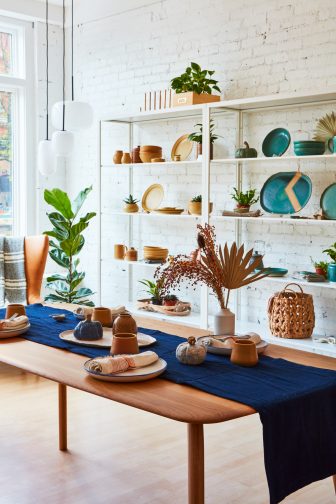 Holbrook’s designs are focused on function, he says, with three sizes for most plates and bowls, tumblers for water and wine, bud vases, planters and home decor items that also work on a table.

“It’s about introducing something handmade into people’s lives, but not making it complicated,” Holbrook says. “It’s easily cleaned and can go in the microwave. We do a lot of custom work, too. You can come in and look, and we can make whatever you see, in the color you’re interested in.”

All the works are thrown in the shop and fired, glazed and fired again at Holbrook and Hulet’s home nearby. “We created our own propriety colors, not replicable, to create our brand,” Holbrook says. “In the shop, we’ve grouped segments of color by themselves, but the idea is to pair, mixing the collections together.”

Customers are invited to move pieces around a center table. There is also a small selection of linens, table-runners, napkins and plants, and Holbrook hosts pottery workshops for adults and families.

The Berte boutique, built around calm and delight, couldn’t be better timed, although the coronavirus did quash any plans for a grand opening.

“How do you do a grand opening during a pandemic?” asks owner Aimée deSimone. “It’s like, ‘Come one, come all, but only six at a time.’ ”

The shop welcomed its first customers on Oct. 24 to browse its collection of homemade goods.

DeSimone was a television and film producer for a decade but said the travel burned her out. She had wanted to own a shop since her early 20s and found that recently she was “gravitating to things which could bring me joy: human-to-human interaction — so exciting and thrilling.” 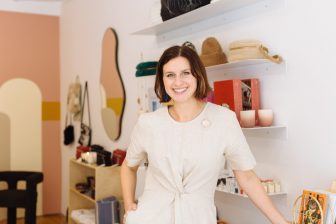 Feeling she had “reached the crescendo” of her production career, deSimone enrolled in a business entrepreneurial course through the Women’s Enterprise Development Center, which has offices in White Plains and Poughkeepsie.

“It was a 60-hour course over four or five months and it helped me paint the picture of what Berte [pronounced Ber-tie] would be and what the mission and feel of the shop would be: A place that allows you to settle, to rest, to have goods to help you live in the moment more,” she says. “This is something I struggled with. That mission was the foundation for how I hand-picked so many of the makers. ‘Curated’ shops sound like they could all be the same, but whoever is in charge — it’s their collection.”

She developed Berte online before expanding to Brooklyn Flea, Phoenicia Flea and FAD Market. “You need to do the markets so you get a sense of people” and what products they respond to, she explains. “I started to mold the business, make it more clear.” All the while, deSimone was still working full time in production. “It was an intense side hustle,” she says.

In February 2019, she and her husband moved to Beacon. “We knew there was a next chapter after living in the New York City for 10 years, and we’d been hiking in the area for five or six years and looking for places to have a brew and burger afterward.”

After the move, deSimone says she “started connecting with little businesses here. I was set on finding my people. I left my job in June 2019 and started committing to the shop full time, on the lookout for a storefront. At the beginning of this year I thought, ‘It’s finally going to happen this spring.’ Then COVID happened.”

In April, her father-in-law died of COVID. His death motivated her to stop “pushing this dream forward. This is something I had been talking about for three years and now nothing was going to get in the way. This determined COVID doesn’t define us. I need to make this positive imprint on this year.”

She found her space in what had formerly been Loopy Mango, a yarn shop. Her store is stocked with brands and objects she has discovered at markets, on Instagram and at trade shows. The four main categories are home decor, accessories, apothecary and stationery. Most of the makers are women, and close to 20 percent are BIPOC [Black, Indigenous and people of color] makers, plus everything is “sustainable, useful and fun.”

She chose the name Berte because she “wanted the shop to have a personable, friendly, approachable feel, not expensive and out-of-reach. I was looking at baby names and thought the spelling was fun and different, and it sounded nice. People are pronouncing it in lots of different ways, and the mispronunciations tell me about the person.” Bowie, the shop corgi, also adds fun.

The atmosphere is intentional, says deSimone. “There’s an exploration element to it. It’s not super-cluttered, it’s clean, with great colors but a minimalist feel. The people who enjoy themselves here get down on their knees and find what’s on the floor. There’s always new stuff to find.”

Six years ago, Alaina James and José Medina were looking for a healthy, quick restaurant in New Windsor without luck.

“There was nowhere in the area that you could grab an all-natural protein shake, a real fresh-pressed juice, or create your own salad — besides a supermarket,” James says.

So they created their own in New Windsor, followed by branches in Middletown, Mohegan Lake, Monroe and, most recently, Beacon. 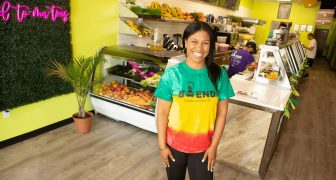 Although opening the takeout shop during the pandemic has been challenging, “we felt the community needed healthy, immune-boosting food now more than ever,” she says. “Blend and Beacon fit hand-in-hand, from the health-conscious community to the outgoing personalities that make up such a small great city.”

“When different fruits and vegetables come in season we incorporate them into the menu,” James says. “From apple butternut squash soup to watermelon, when an ingredient is at its peak, you will be sure to find it at Blend.”