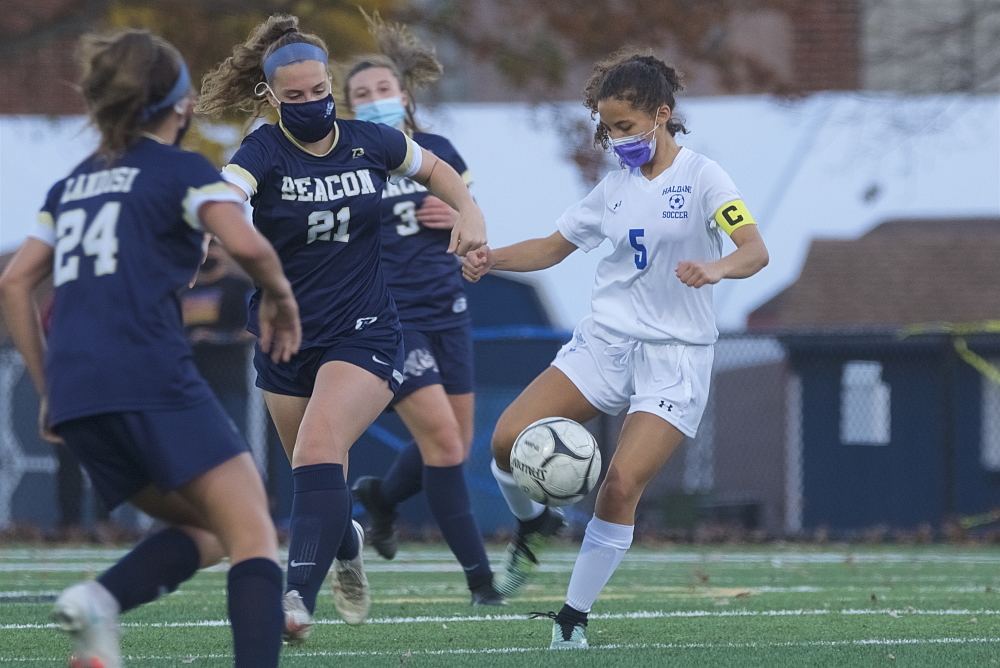 The Haldane High School girls’ soccer team picked up its first win of the season Tuesday (Nov. 10) at Beacon, avenging an earlier loss to the rival Bulldogs.

Sydney Warren’s second-half goal, assisted by Bianca Harmancin on a corner kick, was the difference in the Blue Devils’ 2-1 victory. Beacon had defeated Haldane in Cold Spring by the same score on Oct. 24.

The Blue Devils (1-7-1) scored first, just under 15 minutes in, when Chloe Rowe finished a pass from Maddie Chiera. Gabby Del Castillo answered for the Bulldogs (4-5) on a free kick.

“It was great to pick up our first win against a solid Beacon team,” said Haldane Coach Steve Schweikhart. “When Beacon equalized in the second, the girls didn’t hang their heads, they kept fighting. Beacon had just suffered what looked like a serious injury, and I think their minds were with their teammate a bit when play restarted.” 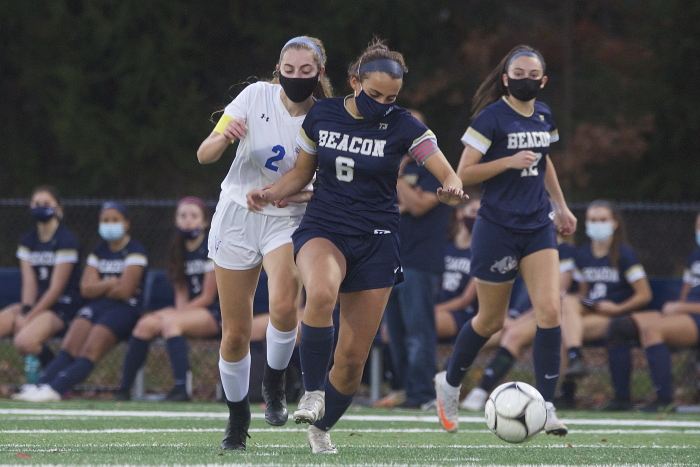 Del Castillo, a team captain and top defender for the Bulldogs, broke her fibula and will miss the rest of the season. “I thought we had momentum on our side,” said Beacon Coach Hugo Alzate. “But the girls were devastated after the injury.”

After Haldane took the lead, Beacon scrambled for opportunities.

“We pressed and pressed, but couldn’t break through,” Alzate said. “They defended us well.”

On Monday (Nov. 9), Beacon lost at Walter Panas, 2-0. “It was a pretty even game, we possessed phenomenally and outshot them,” Alzate said. “The mask break [midway through each half] has been killing us at times. We’ve been playing well and have to stop and the opposition gets to regroup.”

Haldane lost to Arlington, 2-1, on Nov. 6, and on Wednesday fell 6-0 at Lourdes, whom Schweikhart called “probably the best squad we’ve faced all year — very technical, very organized and lots of speed. We gave up a goal in the first two minutes and never recovered.”

The Bulldogs were scheduled to face Ketcham on Thursday (Nov. 12) and Hendrick Hudson on Saturday. Haldane is set to close its season at North Salem on Saturday.

Beacon will play in the sectional playoffs next week in the Dutchess County division and Haldane against other Putnam and upper Westchester teams.