Plans for donated site now go to Planning Board

The Hudson Valley Shakespeare Festival took the first step on Tuesday (Nov. 10) toward relocating to 53 acres on the Garrison Golf Club property when the Philipstown Town Board agreed to consider zoning revisions to make it possible.

The board acted at a workshop meeting. HVSF’s plans now go to the Planning Board for review.

Five days earlier, Chris Davis, who owns the country club property, and HVSF officials shared their plans with the Town Board during its Nov. 5 meeting at the Recreation Center.

The requested zoning change would allow HVSF to build a theater arts complex and park. The festival has operated at the Boscobel site in Garrison since 1988 but would like to move in 2022 to land donated by Davis, whose property contains an 18-hole golf course that would be reduced to nine holes. 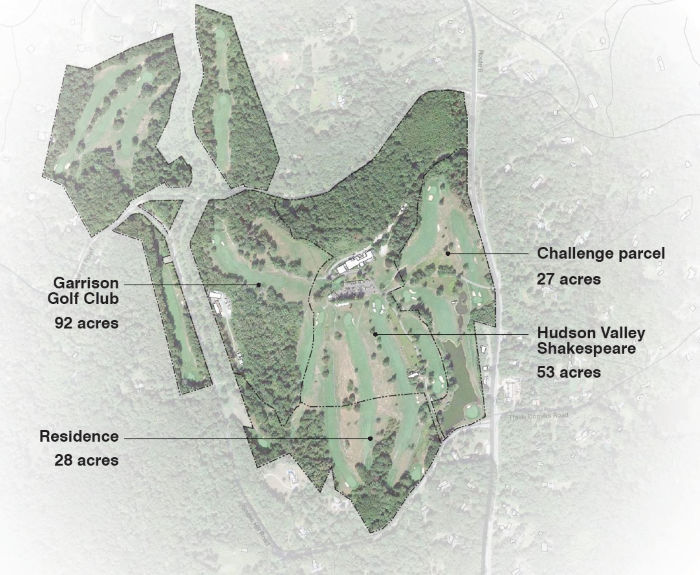 A map shared with the Philipstown Town Board shows the proposed division of land now occupied by the Garrison Golf Club. The “challenge parcel” is property that could someday also be deeded to HVSF.

On the property, bordered by Route 9 and Snake Hill Road, HVSF wants to construct an open-air, 530-person theater, as well as an indoor theater with 225 seats and rehearsal space; rental cabins for artists or visitors; a box office; a concession; a production-rehearsal facility; administrative headquarters in a converted cottage; an outdoor pavilion; gardens, trails and parkland; and parking lots.

When Davis announced the donation in August, the nonprofit HVSF said it would create a for-profit company to run the club restaurant and facilities, and expand a four-room inn into a hotel.

On Nov. 5, Davis said he bought the tract in 1999 to save it from developers who presented “terrifying schemes” of “the worst suburban sprawl.” He retained the existing country club, which once had been home to a mansion-like training center for wealthy physical-fitness buffs.

Davis told the board that when he moved to Philipstown, he realized it had “somehow escaped the suburban sprawl and the vitriol and all sorts of things that plague the world. I wanted to do everything I could to protect or preserve but also to celebrate this peculiar place.” He said he had envisioned the golf club as a “self-sustaining, functional nonprofit” and “resource in the community.”

Calling HVSF “a community institution,” Philipstown Supervisor Richard Shea said that “it’s incredibly exciting to see all the synergies” in the project. He predicted it would have little impact on its surroundings.

Councilor John Van Tassel observed that a play staged “from that spot, with that view [of the Hudson River valley], is going to be spectacular, unreal.”

■ Resident Greg MacGarva reported that since the town banned parking on Indian Brook Road in Garrison, “we’re seeing just hikers, which we welcome.” But another resident, Krystal Ford, spoke of “how sad I am not being able to access Constitution Marsh” and the Audubon preserve. She said the lack of nearby parking makes visits with children difficult and suggested that a van or trolley might run from Cold Spring. Shea said that, “ultimately, it needs a pedestrian-friendly solution,” such as a sidewalk from the village, although that would require state Department of Transportation involvement and take time.

■ Shea and Nancy Montgomery, who represents Philipstown in the Putnam County Legislature, reported meeting with a representative of Optimum after customer complaints about spotty service. Montgomery said they learned that Optimum plans to bring fiber-optic systems to Philipstown, although it said other areas are higher on its list.