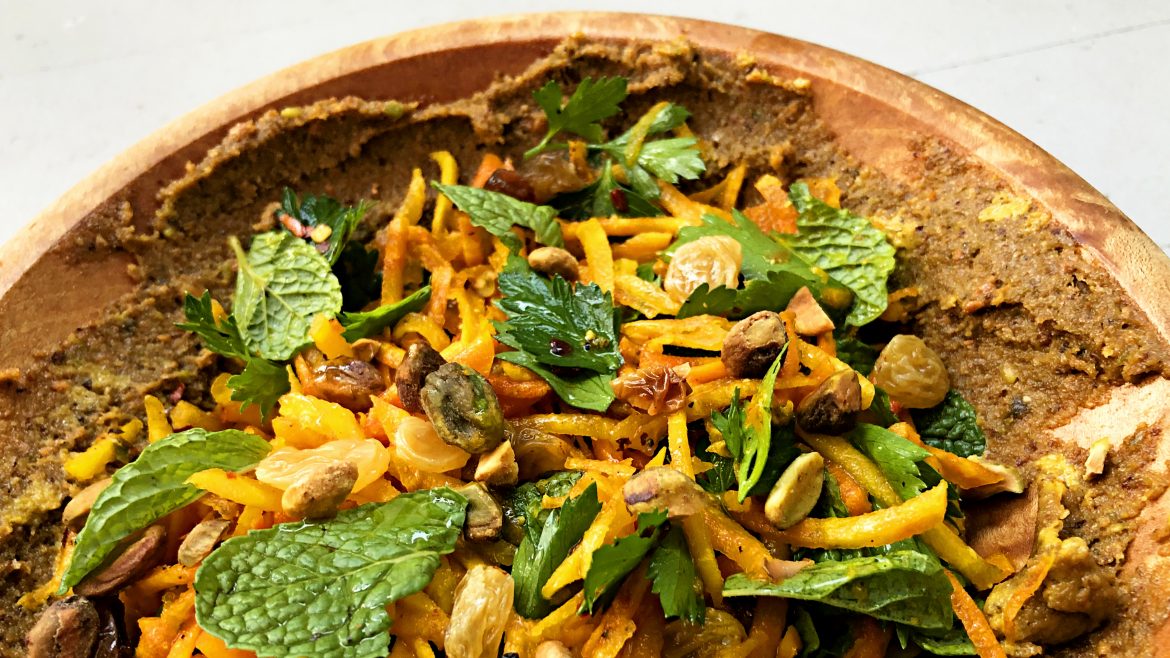 Irwin Goldman, a horticulture professor at the University of Wisconsin, recalls bringing his children to agriculture field trials. He would cut pieces of raw beets for them to taste, begging for a positive verdict.

Beets do have a dirty secret: that distinctive, earthy aroma and taste —a major turn-off for many people — is the result of an organic compound, geosmin, produced by bacteria in the soil.

But what Goldman discovered in his research on beets was that the roots of the plants were also making geosmin. To appease picky kids and adults, he began propagating low-geosmin variants.

The result was the fire-hued Badger Flame Beet, which was bred for sweetness, color and texture. It was brought to market in 2018 by Row 7 Seed Co., a cross-pollination between Goldman and chef Dan Barber of Blue Hill at Stone Barns in Tarrytown.

The Badger Flame is absolutely capable of being eaten — and enjoyed — raw. I came across them at Stone Barns and have seen them offered from Baldor Foods’ home delivery. The thought of these beauties raw reminded me of a recipe by another “vegetable whisperer,” chef Joshua McFadden, in his cookbook, Six Seasons: A New Way with Vegetables.

In his recipe, a slaw of raw grated red and yellow beets and carrots is brightened by lemon and sweet garlic-and-vinegar-macerated raisins. The kick of dried chile flakes is modulated by mint and parsley, and McFadden allows the beets to absorb all these flavors before adding any oil.

The surprise is a slathering of pistachio butter on the salad bowl just beneath the slaw. As juices from the salad dissolve the butter’s nutty layer, the result is a wildly satisfying vinaigrette, crossed with a creamy Asian peanut sauce. Toasted and chopped pistachios scattered over all accentuate taste and texture.

Badger Flame beets were made for this treatment, but to be sure, a more garden-variety beet and carrot (see note at the end of the recipe) is more than satisfying. There’s so much tasty goodness going on that a little geosmin is not going to spoil the party.

From Six Seasons, by Joshua McFadden

Makes 1 cup+; store refrigerated up to about 10 days

* If you can’t find Badger Flame beets, substitute a combination of ¾ pounds grated regular beets (red, yellow or both) and ¾ pound grated carrots. Be sure to keep them separate until tossing to keep the colors as separate as possible.

1. To make the pistachio butter, chop pistachios as fine as possible in a food processor. With motor running, add water, vinegar and salt. Process, scraping sides occasionally, until smooth. With motor still running, drizzle in oil. Blend in salt and more oil or vinegar as needed, adjusting to taste. Reserve. (Can be made ahead.)

2. Preheat oven to 350 degrees. Combine garlic, raisins and vinegar in a large bowl and let sit 1 hour. Remove and discard garlic from raisins; reserve. Spread out pistachios on a small rimmed baking sheet; toast in preheated oven, stirring occasionally, until golden brown, about 6 to 8 minutes. Cool and chop coarsely and reserve. Grate beets on large holes of a box grater, in a food processor with a medium shredding disc, or cut into fine julienne.

3. In a mixing bowl, lightly toss grated beets, 3/4 of the mint and parsley (saving the rest for finishing), chile flakes, reserved raisins in vinegar and lemon juice. Season with about ½ teaspoon salt and lots of black pepper. Toss and let sit about 5 minutes and then taste — the slaw should be tart, spicy, peppery and sweet. Adjust seasoning, if necessary, then add a healthy glug of oil (about 1/4 cup). Toss and taste again.

4. To assemble, using a flexible spatula, coat a wooden salad bowl with ½ cup pistachio butter. Mound the salad into the prepared bowl, garnished with the reserved mint and parsley. Scatter the chopped pistachios over all and finish with a light drizzle of more oil. At table, toss to incorporate the pistachio butter with the other ingredients; serve.