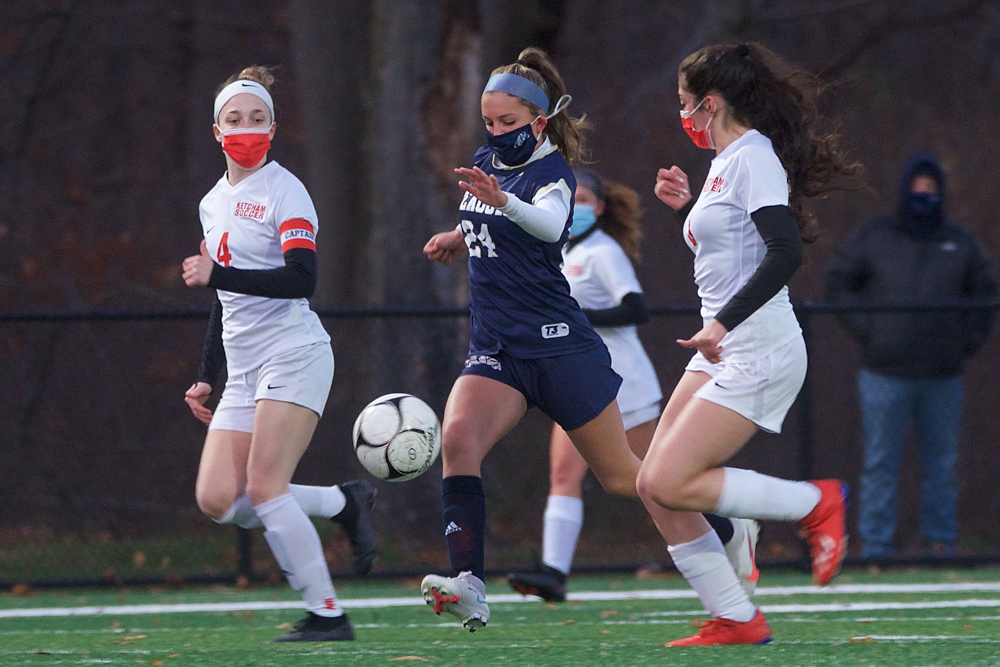 That changed Tuesday (Nov. 17), when the Bulldogs outlasted Ketcham in a marathon thriller that remained scoreless through 80 minutes of regulation and four overtimes before Beacon prevailed in a penalty-kick shootout, 4-2.

Beacon (7-5), seeded No. 4 in the Dutchess County playoffs, advanced to the semifinal on Friday, where the Bulldogs were scheduled to face top-seeded Arlington. The winner moves on to Saturday’s championship round. [Update: Arlington overwhelmed the Bulldogs, 9-0.]

With a cold breeze blowing at Beacon High School, both teams had opportunities on Tuesday but neither could cash in. In the shootout, Devyn Kelly went first and scored, Ketcham tied it, Beacon missed its second opportunity and Ketcham scored to take a 2-1 lead. 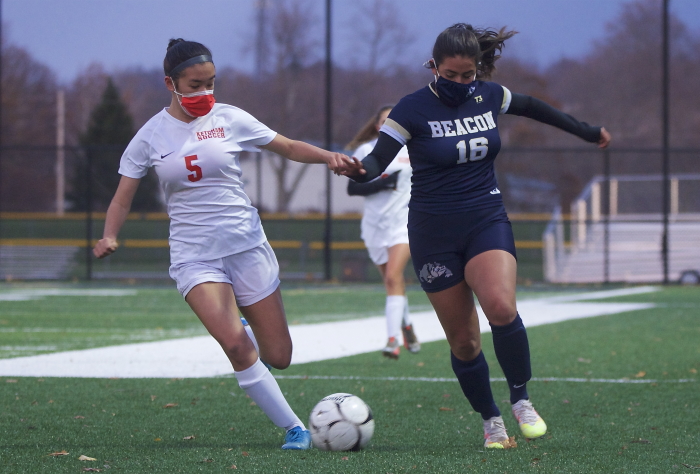 Chelsea DerBoghassian buried her shot to even the score, Ketcham missed its next shot and Maddie Bobnick put Beacon ahead. Keeper Elizabeth Reynolds came up with a huge save on Ketcham’s next chance — the first save in the shootout by either keeper — setting up the clincher from Claire Derrenbacher.

“It was nerve-wracking, but I was ready for it and had a good feeling,” Coach Hugo Alzate said. “Even when we went down, I knew we were fine. The girls were a little anxious, but not Claire or Chelsea. I knew our shooters were money, and all three scored.”

Alzate said both teams played well during regulation. “Ketcham outplayed us early,” he said. “By the second half we were getting some good pushes. We changed our formation a bit and that led to some scoring opportunities. We had six corner kicks to their five, but we couldn’t finish.”

Haldane had less success, losing in the opening round of the Putnam-Northern Westchester small-schools playoffs to No. 7 Croton-Harmon, 3-0, on Tuesday.

Coach Steve Schweikhart said his team, which was seeded No. 10, played better than the score indicates. “It was even in terms of possession and territory, but Croton finished their chances and we did not. Their goals came on breakaways.”

Keeper Ruby Poses stopped nine shots to keep the game within reach. “Ruby had another solid game in goal for us,” Schweikhart said. “There wasn’t much she could do on the breakaways. And I thought she did an outstanding job for us the entire year. Being a freshman made that even more impressive.

“Mazzie Maxwell was all over the field for us,” he said. “We moved her out of the backline to try to get more of a midfield presence, and it helped. Chloe Rowe and Bianca Harmancin worked hard on the wings. Most of our offense was built through them and they logged a lot of miles, covering huge swaths of the field every game.” 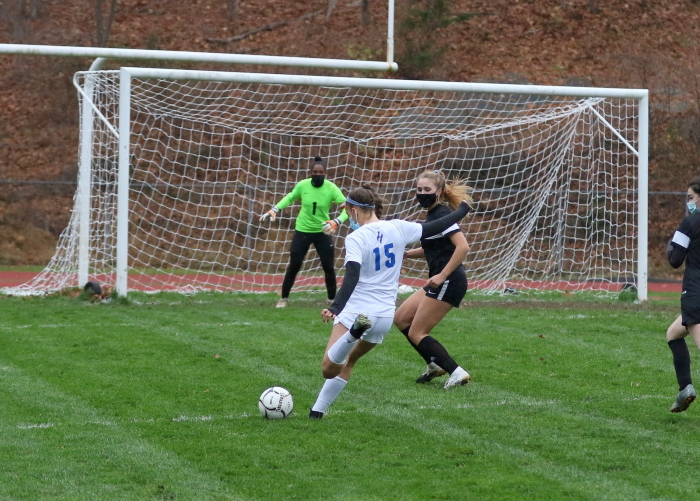 He said that despite its 1-10-1 record, the team came through the unusual season, dealing with pandemic restrictions, with flying colors.

“Because of injuries, we usually only had 12 or 13 players each game,” he said. “They went out there masked up and never complained. A lot of people don’t realize how hard it is to run in masks. What these girls did every game for 80 minutes should be a source of pride for them. I have always valued fitness on my teams, and seeing how these girls held up, without the benefit of a preseason, is one of the most impressive things I have ever been around.”

The team has only two seniors, Essie Florke and Sydney Warren, whom Schweikhart called “the emotional sparkplugs” for the Blue Devils. “Having such a small squad this year should benefit the team next fall because every girl got a lot of game experience,” he said.

Beacon Coach Craig Seaman felt the pressure was on his team in the Bulldogs’ Section 1, Dutchess County playoff semifinal against Lourdes on Monday (Nov. 16). Beacon was hosting the game and had beaten the No. 3 Warriors twice during the regular season, so the Bulldogs had to be motivated.

Beacon escaped with a 1-0 victory thanks to Chase Green’s first-half goal off a pass from Tommy Franks.

“It was not a pretty game,” Seaman said. “Lourdes is a big, physical team, and they came out ready to play. It was cold and tough to pass, and we never got into a flow.” 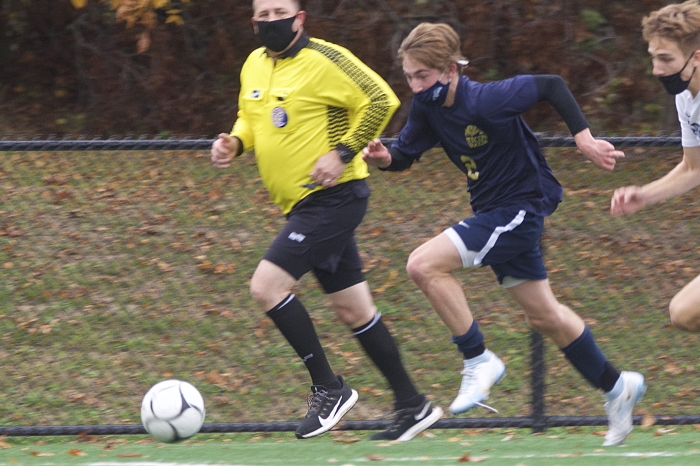 Chase Green (2) had the game-winner for the Bulldogs against Lourdes. (Photo by S. Pearlman)

Seaman said Dillon Kelly played a key role at center back. “He held things together for us,” the coach said. “The game had a messy feel, and he’s very composed. He kept us organized.”

The win put Beacon into the championship game today (Nov. 20). The team will travel to face No. 1 seed John Jay of East Fishkill for its first sectional final in 20 years. The Bulldogs missed a penalty kick against the Patriots during the regular season and lost, 1-0. [Update: The Bulldogs stunned John Jay, 2-1, to win the title.]

“We have to be strong defensively,” Seaman said. “They have a lot of quality forwards, and we have to keep possession and string passes together.”

Haldane also won on Monday, defeating Putnam Valley, 3-2, in the Putnam-Northern Westchester small-school playoffs and advancing to the Wednesday quarterfinals at North Salem, where they fell short, 6-1.

In Wednesday’s loss, freshman Tray McCarthy scored Haldane’s lone goal in the second half, off a pass from Frank Bentkowski Jr.

The Tigers took a 3-0 lead at halftime and never looked back. The Blue Devils closed their season at 4-10. 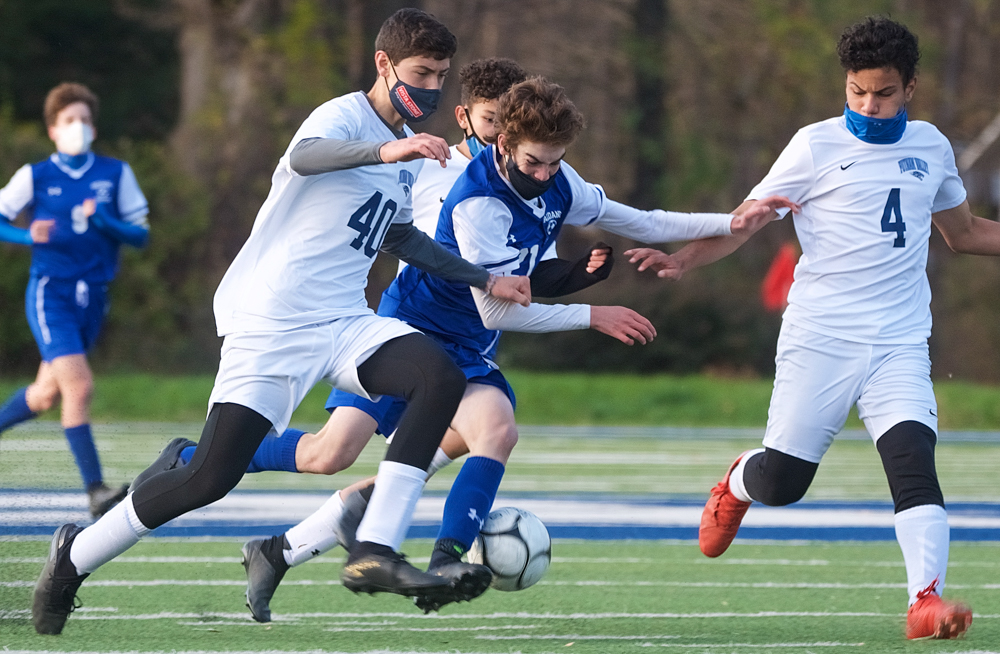 Haldane freshman Clement Grossman (21) got taken to the ground by a Putnam Valley defender on this play, resulting in a yellow card and a free kick. (Photo by S. Pearlman)

“The field was not in great shape, and they’re a big team,” said Coach Ahmed Dwidar. “We’re a small and young team, so this was not a good matchup for us.”

Dwidar said he was satisfied with the season. “We picked up a couple more wins than we did last year and won our first postseason game in five years. And it was great to even have a season.”

Against Putnam Valley, Bentkowski scored two goals in the first half — both unassisted — and Matt Nachamkin scored in the second on a corner kick assisted by Matt Silhavy.

The Blue Devils will lose four seniors, including three starters, but Dwidar said that “we have a lot of returning young players and talent, and we also have a good keeper back for three more years.”

The Haldane and Beacon cross-country teams competed at the Section 1 meet at Milton last week.

The Haldane boys set a school record, with all five top runners finishing in under 19 minutes on the 5-kilometer course, and the top three crossing the line in under 18 minutes. The Blue Devils placed third as a team, behind Briarcliff and Hastings. 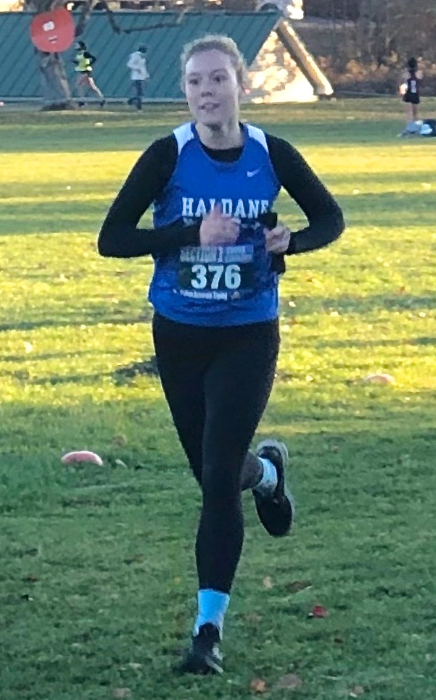 “I knew John and Rowen would do well, but I didn’t expect greatness!” said a pleased Coach Tom Locascio. “Our top three runners did what they have been doing all season, but the team scoring requires contributions from the bottom three runners as well. Today we got that.”

“The entire team continues to improve each week,” Locascio said. “That starts with veteran leadership, which is provided by our seniors [Ferri, Hoess and Campanile]. Only one week remains and I already miss these kids.”

Beacon, meanwhile, finished 10th of 21 schools in attendance and was second to Pearl River among Class B-sized teams. 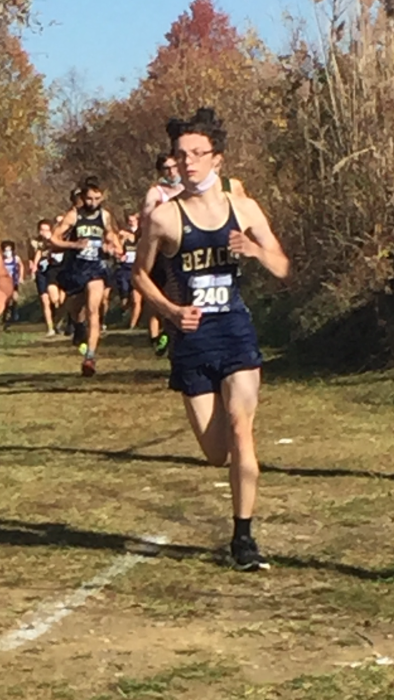 The final race of the season is scheduled for this weekend at Milton. Beacon will compete against Arlington, John Jay of East Fishkill, Ketcham and Lourdes.

While John Jay is the favorite to repeat as the county champion, the race for runner-up will be “extremely competitive,” Beacon Coach Jim Henry said. “We’ll probably need to get our team average down to the low 17:30s, which is possible but will require all five of our top runners to have their best day yet.”