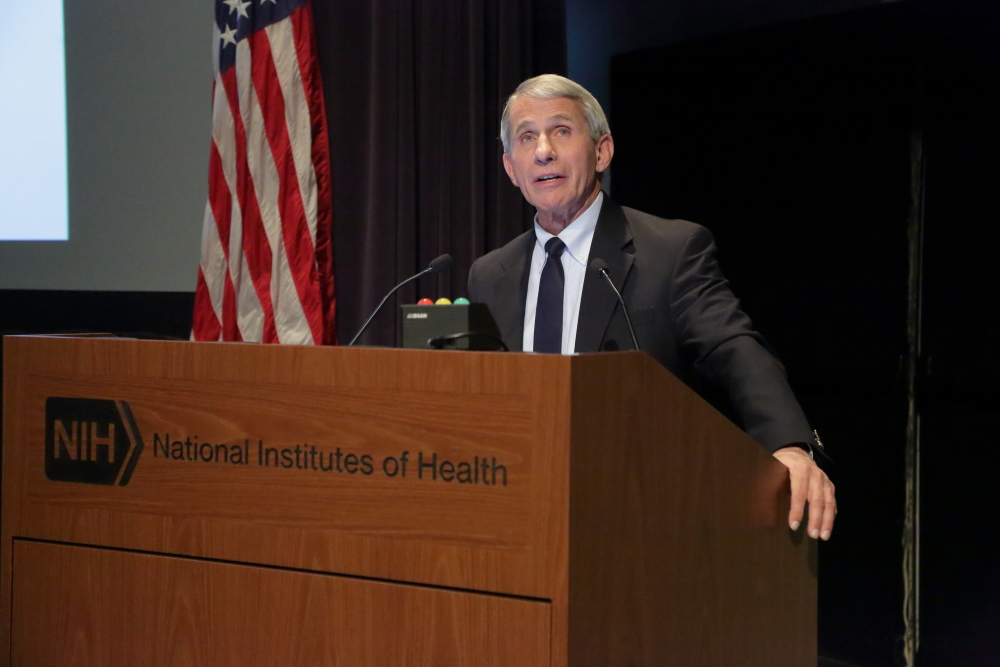 Dr. Anthony Fauci is the director of the National Institute of Allergy and Infectious Diseases and a member of the White House Coronavirus Task Force. He visited Philipstown on Thursday (Nov. 19) — at least virtually — to be interviewed over Zoom by Mildred Solomon, president of The Hastings Center, a bioethics research institute based in Garrison. Solomon’s questions and Fauci’s responses have been condensed.

Solomon: We are meeting at a perilous moment in our nation’s history, with a pandemic out of control and a highly polarized public. Yet, at the same time, it’s a moment of unprecedented opportunity because we have news of promising therapeutics and vaccines. There is also greater recognition of health inequities, which may create the opportunity for health justice and racial reckoning. Do you also see this moment filled with both peril and opportunity?

Fauci: Oh, absolutely. We’re dealing with an explosive pandemic, the likes of which we have not seen since 1918. It’s also occurring at the most inopportune time, when there is this politicization. I’ve served six presidential administrations and I’ve been doing this as the director of the institute for 36 years and I’ve never seen a situation in which a public health issue has been thrust into divisiveness.

With health disparities, we have a situation among minority populations, particularly African American and Latino, because they are suffering more than three times as many deaths. In part, that’s due to the reality that people of color are more likely to be in face-to-face jobs with others, so their chances of getting infected are far greater than for you and I, sitting in front of a computer, safely talking to each other.

The other thing is that underlying co-morbidities, namely diabetes, obesity, high blood pressure, chronic lung disease, kidney disease, put them at a significantly higher risk of not only hospitalization but death. That is not a racial issue — that is a social determinants issue. That goes back from the time you were born, the environment in which you grew up, the diet you were exposed to. That leads to the kinds of diseases that we’re seeing as co-morbidities. If anything comes out of this, when we get out of this, it should be a firm, decade-long commitment to doing something about the social determinants of health. Because if we don’t, they’re not going to spontaneously go away. And the next time we have an outbreak, it’s going to be the same thing.

Solomon: It is extraordinary that we’re seeing 95 percent effectiveness with the first two vaccines, but what does that mean? My understanding is that Pfizer and Moderna’s vaccines will protect people from serious illness; people who got the vaccine were much, much less likely to get symptoms, which is a great thing. But we don’t know yet if they will protect against infection or whether they could still be contagious. Do I have my facts straight?

If I get infected but I don’t get symptoms, I count as a plus for the vaccine, but I’m still infected. The question that we don’t know, which is going to be really interesting — if I’m infected but vaccinated, is the level of virus going to be so low that I don’t infect other people? The open question is we don’t know yet how well it prevents infection. What impact is it going to have on transmission?

Getting vaccinated with a highly efficacious vaccine does not mean that you’re going to completely abandon public health measures, because it’s conceivable that even though you’re feeling fine, you still have the virus. Remember, the primary reason for wearing a mask is to prevent you from infecting others. The rationale is that you don’t want someone who has no symptoms infecting someone else.

The public health measures, the stringency of them that we are under now, can be dramatically reduced as more of the population gets vaccinated and there’s more of a veil of protection. But you don’t want to abandon them completely until the level of virus in the community is so low that the risk of someone getting infected is minuscule.

Solomon: I’ve heard you estimate that we’re going to need as much as 80 percent of the population to be vaccinated before we reach herd immunity. But there’s a large number of people who say they wouldn’t trust a vaccine, and the difficulty is their reasons for distrust are not all the same. What do we do to ensure that the system is trustworthy and that it’s perceived as trustworthy?

Fauci: You hit on something critical. If the reason you don’t want to get the vaccine is you believe the process was opaque or slippery — namely some political person is going to want to get a vaccine out quickly or what have you — or that decisions are made behind closed doors, then there’s a problem. Or you say, you told me five years ago that it takes years to get a vaccine and now you’re telling me you have a safe and efficacious vaccine within a year.

People should know that the speed is a reflection of scientific advances — the technology of making a vaccine is not your grandfather’s technology. It’s taking a virus that you don’t even have to grow — you pull the gene out and stick it into a vaccine platform and within days you’re making a vaccine and you’ve saved a year there.

The other aspect is that the federal government has invested billions of dollars. It felt that the benefit of getting it quickly was worth the risk of the money. So that’s what you have to explain. The speed has nothing to do with compromising safety or scientific integrity. The process is sound. However, there’s a group of people who don’t even believe that this is a phenomenon; they think it’s fake news. That’s where I have a big difficulty. How am I going to get to that group of people? They don’t think that this is a problem, despite a quarter million deaths, despite more than 11 million infections, despite 150,000 new infections a day.

Solomon: Many people who are opposed to mask-wearing and social distancing invoke a liberty argument. I’ve seen signs holding up Thomas Jefferson, but our founders were basing their beliefs on 18th-century political philosophers like John Locke, who said explicitly that liberty is not the same as license. How do we get that message across?

Fauci: You can make analogies to something they understand. They don’t want any encroachment on their liberties. What about seatbelts? What about speed limits? Are you allowed to go as fast as you want to go because, “I don’t really care if I get hurt, that’s my problem”? No, because you might hurt somebody else. The same thing with infection. You hear the attitude: “The vast majority of people, particularly young people, they’re going to get infected and they’re not going to get any symptoms, what do I care?”