The Village of Cold Spring may be moving closer to adopting paid parking on Main Street and at other locations.

At the Tuesday (Nov. 24) meeting of the Village Board, Deputy Mayor Marie Early shared information about a phone app offered by ParkMobile, a firm that provides its services nationwide, including in New York City and Cornwall. 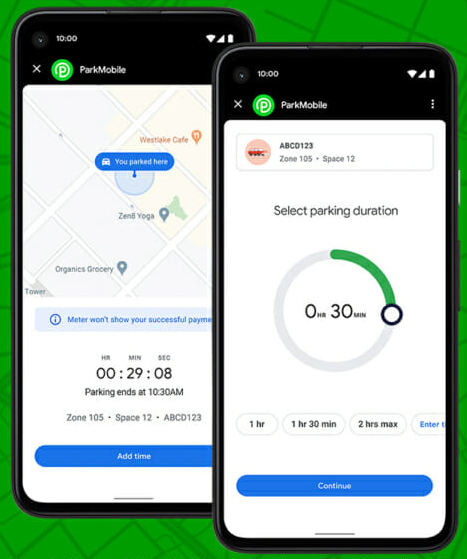 Screenshots from the ParkMobile app

“We should seriously consider ParkMobile if we want to go ahead with fees for parking on Main Street” and village-owned spaces at Depot Square, Early said. At a previous meeting she said fees could also be considered for Fair Street adjacent to Mayor’s Park.

Mayor Dave Merandy said the idea should be considered over the winter, once a parking committee is reestablished.

Early said motorists would download the app and enter their plate number to set up an account and make payments. Drivers who do not have a phone or tablet would be able to call a toll-free number to make payment, she said.

Early said fees can be flexible. “You could have one fee on Monday and Tuesday, a different fee on Wednesday and Thursday and a separate fee on Friday, Saturday, Sunday,” she said. The fees also can be progressive, with an increased per-hour cost for longer stays.

■ The board approved Valley Tree Experts’ $5,840 bid to prune 28 trees on village-owned property. It was the lower of two bids received after a request for proposals was sent to 10 companies.

■ Cedar Street will be closed Wednesday (Dec. 2) for work on a water line.

One thought on “Cold Spring to Consider Parking Fees”