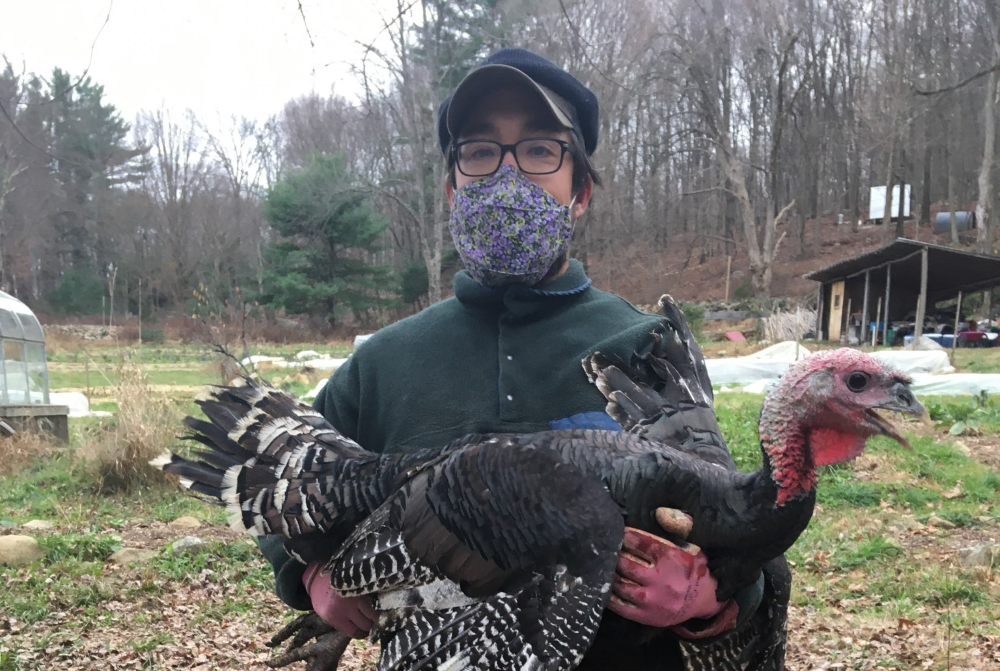 Jason Angell is the owner, with his wife Jocelyn Apicello, of Long Haul Farm in Garrison and a board member of Highlands Current Inc.

Long Haul sold 25 Thanksgiving turkeys this year. How does it work?
We buy hatchlings in May from a hatchery in Pennsylvania, which mails them to us; newborn turkeys can survive for 24 to 36 hours without food or water. I get a call from the Garrison post office and you hear the birds in the background. They’re as cute as they’ll ever be. People in our CSA reserve them for November.

Do you get a mix of male and female hatchlings?
Yes, and we get a breed called Standard Bronze. When we started, we were getting a standard commercial turkey that is bred to be heavy in the body and breast. But they just sat around the feeder. Now we get a heritage breed that has enough of its natural sense and genetics that it hunts and pecks and forages.

What do you feed the birds?
About two-thirds of their diet is organic grain, and the other third is compost scraps from the garden. When they get big enough, they can hop the electric fence into the garden and I have to chase them down before they destroy it.

Did COVID affect your orders this year?
We did have people calling last week to ask if they could get a smaller bird, “because it’s just us.” But it’s too late for that! [laughs]

When do you harvest them?
We harvested this year on Sunday [Nov. 22]. It takes a few hours. We have seven or eight friends who help, and sometimes people who bought a turkey. The birds are in a coop and we bring them out one at a time. As the coop gets empty, they have more room to evade you, so they get harder to catch. We hold them upside down or we stroke their breast feathers. You’re trying to get them into a calm state, you know? It should be done as humanely as possible. Most Americans eat meat without accepting that the animal had to die.

So I assume you don’t name them?
The first year we had turkeys, our daughter Seneca was 3 or 4 and she named one Old Gal. Those turkeys were a breed that was almost too “heritage” for us. During the slaughter, Old Gal escaped and flew 50 feet up into an ash tree. We were like, “OK, Old Gal gets a reprieve.” Seneca was happy. But all winter, I was out there feeding Old Gal. Halfway through the winter, she disappeared and we thought an owl or coyote got her. But in the spring, this turkey trots out of the woods and it’s Old Gal with 15 hatchlings. We fed her and the hatchlings for about 10 days before they disappeared back into the wild.

I was thinking about this with the pigs. Since we started doing the slaughtering ourselves, I try not to make too deep a connection with them. It’s weird. Is it strange to teach yourself not to be empathetic? You’re aware you’re raising these animals for meat, so to balance that out, you give them as good a life as possible. With the turkeys, they are outside all the time, they eat grass, they eat bugs, they’re taking dust baths, they’re doing all the things they want to do. It doesn’t mean that the end of the story is pleasant, but you also give them as good a death as possible.