The budget, as first drafted by Mayor Lee Kyriacou, raised the tax levy — the total that the city can collect through property taxes — by about $200,000 because of new construction. That would have kept taxes on existing homes and commercial properties flat.

The proposal did not raise taxes to the maximum allowed under a state tax cap, which Kyriacou said was meant to help residents hurting financially because of the ongoing pandemic shutdown.

The plan instead relied on withdrawing as much as $2.2 million from savings to balance the budget because of an expected drop in state aid and sales tax revenue due to the shutdown.

However, during a public hearing last month, a number of residents called on the council to “go to cap,” or figure in the maximum tax increase, to create about $186,000 in additional revenue. Doing so, the residents said, would free up money for community programs not included in the proposal.

On Monday, the council settled in between, adding eight items to the $22.2 million in general fund spending, and using an additional $105,000 in savings and the tax increase of nearly $100,000 to pay for them.

State law allows the city to roll over its unused tax levy (about $87,000) to next year’s levy.

Because the amount of state aid and some sales tax revenues won’t be known until 2021, city officials can only estimate how much they’ll be spending from reserves. But in a worst-case scenario, $2.2 million would be an all-time high and an amount Kyriacou has said repeatedly that Beacon cannot sustain.

The approved budget also includes about $5.9 million for the Police Department, the city’s largest single expenditure. That’s a nominal ($6,500) increase over last year, but one that still drew criticism during budget hearings from residents who supported “defunding the police” in favor of spending on social services.

The council on Monday restored the K-9 program, at a cost of $24,400, that had been removed from the police budget, although Kyriacou said he does not want to keep it long-term.

The council on Monday held a public hearing on a special-use permit being requested for a proposed four-story, mixed-use building at 416-420 Main St., the site of the Kitchen & Coffee eatery, which would remain.

The proposal includes retail on the ground floor, office space on the second and third floors, and a single apartment on a recessed fourth floor, as well as a two-story live/work building at the back of the parcel. The council must grant the special-use permit for the fourth floor to be built.

If approved, it would be the first four-floor development allowed on Main since the city adopted provisions in May requiring at least one “public benefit” to be included in projects seeking a fourth floor. In this case, the developer said that green space behind the building would be open to the public. 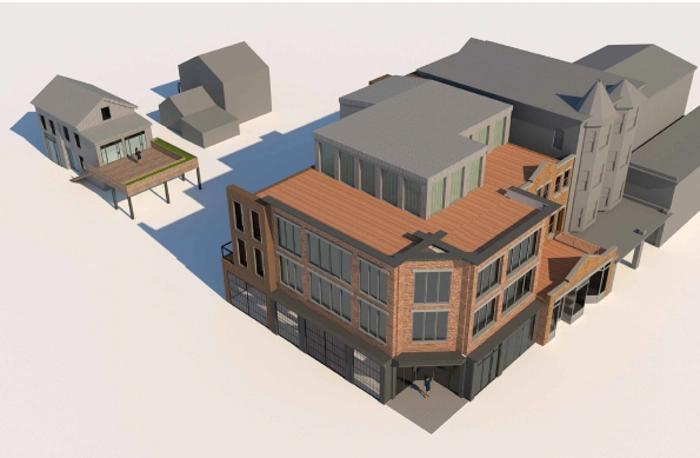 An aerial rendering of the proposed structure that was shared with Planning Board shows its recessed fourth floor.

On Monday, architect Aryeh Siegel described landscaping that would be added to the roof, along with a “minimal, lightweight, glass greenhouse-type” design on the fourth floor that he said would reduce its visibility from Main Street.

Two residents spoke during the hearing and another emailed a comment. None favored the project.

“There will be no real community benefit” to taxpayers, said Theresa Kraft, who argued that the green space will only be used by people working or dining at the building. “In reality, it’s the size of a postage stamp, with minimal outdoor space abutting parked cars and business delivery trucks.”

The hearing was adjourned for two weeks and can be picked up at the council’s next meeting.

The City Council also set a public hearing for Jan. 19 on a proposed law that would shift the approval of wireless telecommunications facilities, including small cell wireless, to the Planning Board. Some approvals currently require a special-use permit from the City Council.