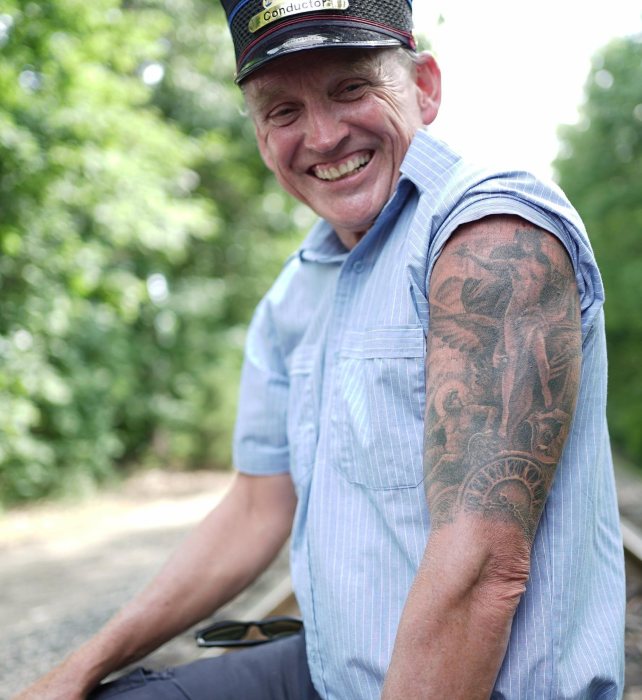 Shaw shows off his tattoo of the landmark statue of Mercury located above the entrance to Grand Central Station. (Photo provided)

Michael Shaw, who spent 36 years as a Metro-North conductor, is the author of My Rail Life. He lives in North Haven, Connecticut.

What prompted you to write a book?
I enjoy telling stories. Mine has 70 chapters but it could have had 700 if I had started writing when I began the job. Over the years, I organized parties and golf tournaments to benefit the Conductors’ Union Scholarship Fund and others in need. We raised more than $250,000. I’d always provide entertainment but wanted something special for my last party when I retired. So I handed out my book, something to remember me by. I hope what it lacks in grammar or correctness I make up for with honesty, feelings, love of life and a little humor.

What was the most difficult aspect of your job?
I had only been working about a month when I first witnessed a suicide. I could see the girl walking on the tracks toward the train, felt the emergency brakes go on, heard the train horn, muffled by my engineer’s screams. Four people were killed by trains I was working on, three by suicide. I found my job and this world such a happy place to be, I found it hard to see how much depression is out there. We also lost people we worked with in accidents. The hardest days involved death.

There must have been funny incidents, too?
I was helping a passenger in a wheelchair during a track change at Grand Central. She was a regular, in her 30s, attractive and spunky, and wearing a white tank top and black miniskirt. She was missing both legs from the knees down. I made small talk, asked what she did in the city. She said, “I’m an escort.” I was at a loss. I replied, “Huh, like a …” and she finished my sentence: “Yes, like an escort!” She said if you carry more than 100 condoms in your bag you can be charged with prostitution. “So, I carry 99,” she said. We both laughed. No, I didn’t become a client — just a friend.

Any celebrity sightings?
I had my fair share: Phil Donahue, David Letterman, Sigourney Weaver, Joe Torre, Al Pacino, Ron Howard, Glenn Close, Robert De Niro. Victoria Jackson from SNL [Saturday Night Live] was so funny. The nicest star was the New York Rangers’ Mark Messier. He always thanked us for the great ride. My daughter loves the Rangers and I got her a photo of Messier wearing my conductor’s hat, sitting in the cab, pretending to drive the train. A week later his teammate Mike Richter was aboard. I did the same photo with him. That was fun.

What did you do with lost items?
I was a little crazy about that. I’d do everything possible to get an item back to a commuter. If I found something with ID in it, I’d look the person up and call them. People appreciated that. I got a tuxedo back to the owner just in time for him to attend an event at Gracie Manor with Mayor Rudy Giuliani. He was ecstatic — and we became friends. When I drove a wallet right to the owner’s house, he said, “I could kiss you!” The wallet was old, expensive and had belonged to his deceased father-in-law. He offered me the couple of hundred bucks in the wallet, but I refused. I left feeling great, loving life — and glad I wasn’t kissed.