Pamela Garfield is inspired by non-humans, and that’s what she paints. She finds her subjects right outside her Beacon doors and windows.

“When I moved here [from Yorktown], I discovered a tribe of house sparrows hanging out in this tangled-up, weedy bush thing in my tiny backyard,” she recalls. “I’ve made relationships with these sparrows, and with the other backyard birds: the juncos, blue jays, cardinals. They hang out [at the feeder] and look at me, and we go, ‘Hi, hello.’ I want to understand and appreciate their not-humanness.” 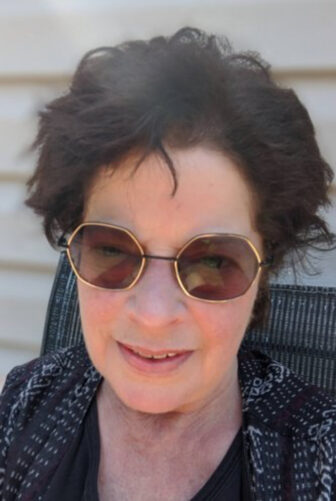 Garfield’s love of nature began in the backyard of a tract house on Long Island that her parents bought in 1950 in what used to be a potato field.

“My father had a vegetable patch and built a chicken coop,” she recalls. “It was a suburban farm, with cherry trees and crabapples. I’d spend hours there, retreating behind the lilac bush in the corner of the yard.”

As a child and teenager, she was “always making art. My mother poured creativity into everything she did. She’d say, ‘Look out the window: what colors do you tell?’ My father owned a printing plant, so the house was always filled with paper.”

After graduating from the Pratt Institute in Brooklyn, Garfield became a graphic artist. “One of the advantages I had, as a printer’s daughter, was that I knew what something was likely to look like on press,” she notes.

She went through periods focusing on printmaking and the construction of plaster and paper pulp vessels but settled on “painting what I’m looking at. As the seasons change in the world, they change in my paintings.”

After 10 years as a graphic artist, Garfield left the industry to raise her son. She and her husband bought a house on a cul-de-sac in Yorktown that had an acre of rugged, wooded land that led to a pond. “I felt like I’d been set free,” she says. “When we first moved there, I’d lie in bed and hear all the animal sounds.”

The family got a Labrador retriever. “This incredible dog trainer came to my house,” Garfield says. “She walked in and said, ‘Ishkabibble.’ I said, ‘What?’ She said, ‘They don’t understand a word you’re saying. You have to train them so they regard their human as a teacher and a friend and a parent.’ This was in 1993, and it was the beginning of a sea change in how our culture interacts with animals. Through my dog, Cory, I entered the world of animal consciousness.”

One day a pair of sparrows set up house in the garage. “We were fascinated watching them,” she says. “Another pair came the next year and, over 15 years, about 3,000 birds, including barn swallows, came into our garage.

“Although it wasn’t the cleanest, it was so immensely amazing because these birds established a relationship with us. It was clear, in a short while, that they had a language. I came to realize they were saying complex things to each other and making complex plans.”

During a lengthy stretch consumed by family health issues and caregiving, Garfield stopped submitting her work to juried shows. “It began to feel demoralizing and meaningless,” she says. “There was so much effort spent on places to show, and it would be on the wall for a number of weeks and it was over.” However, she never stopped making art. “I can’t not do it,” she says.

In 2011, with their son grown, Garfield and her husband decided to downsize. “I was in desperate need of an arts community,” she says. When they visited Beacon, “it was like, ‘Oh my goodness, my dilemma is solved.’ My heart started beating out of my chest. This is what I needed: people interested in building something fresh and interested in community.”

Garfield immediately became involved with Beacon Open Studios. She displayed her work in a two-artist show at Hudson Beach Glass and contributed to the annual Small Works shows at Catalyst Gallery before it closed. She even entered juried shows.

“This community celebrates the creative life,” she says. “A lot of the arts activity in this part of the Hudson Valley feels more authentic than anything I participated in in New York City and Westchester.”