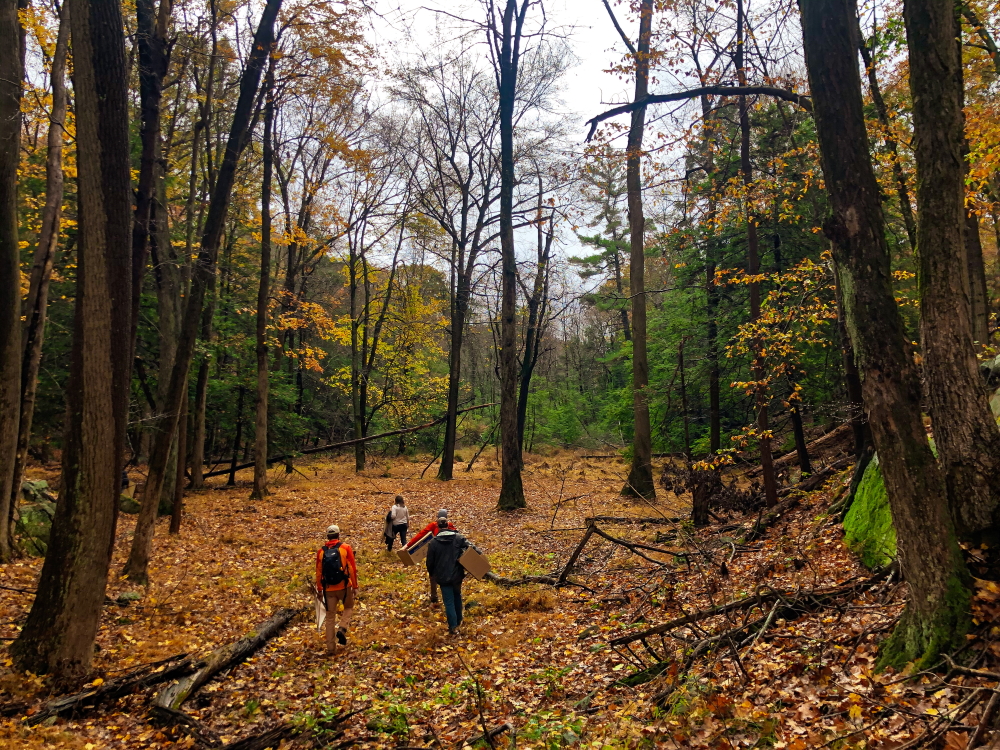 Scientists search for Laricobius beetles in Harriman State Park. (Photo by B. Cronin)

Ash, beech and hemlock trees are being threatened by causes known and unknown, changing the forests of the Highlands in drastic, and dangerous, ways

“This,” says Nicholas Dietschler, displaying a photo to a half-dozen volunteers (including me) on a gray, misty autumn morning in Harriman State Park, “is what we’re looking for.”

The photo is of a black beetle, Laricobius nigrinus, which is native to the Pacific Northwest and would normally not be found in the Hudson Valley.

And yet, if we find any of the beetles, it won’t be a cause for alarm but for celebration. In fact, after we search two areas of the park for Laricobius, we’re going to release 843 more of them.

That’s because Laricobius nigrinus eats one thing: hemlock woolly adelgids, another non-native species that showed up in the Hudson Valley in the mid-1980s and has been ravaging the Eastern Hemlock population.

Dietschler and his colleague Marshall Lefebvre are from the New York State Hemlock Initiative, an organization founded at Cornell University in 2014 by Mark Whitmore, a forest entomologist. Whitmore has been studying adelgids for nearly 40 years. Over the phone, I asked him how the hemlock woolly adelgids in New York state have changed over the course of that time.

“They’ve been very happy,” he says. “And that’s concerning to me.” 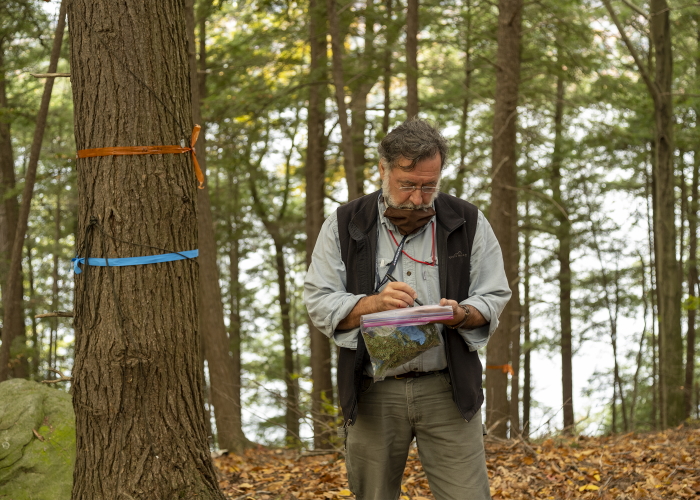 Mark Whitmore of the Hemlock Institute recording data in the Adirondacks. (DEC photo)

Nevertheless, there had never been a statewide initiative to deal with the problem. “We need eyes out there, looking, to help us,” Whitmore says. “So I figured, aw, what the heck. We’ll just try this. It’s important for people to realize that they don’t have to sit around and watch the trees die.”

Like the ash trees afflicted with emerald ash borer beetles that I described last week, hemlock trees can be injected with insecticides that kill hemlock woolly adelgids. Unfortunately, as with ash trees, the treatment is too expensive and labor-intensive to be adopted on a large scale. Eastern Hemlock trees are the third-most common tree in New York, and the state has more hemlock trees than any other state in the country. A large-scale remedy is needed, and that’s what the Hemlock Initiative is rolling out, even if it centers on something very small.

The field of “biological controls,” or combating a pest by introducing a predator to its environment, can be dangerous to navigate when the predator being introduced is not native to the region. Extensive research must be done to confirm that the predator won’t wreak havoc.

William Schuster, the executive director of Black Rock Forest in Cornwall, has elected not to proceed with biological controls there.

“We decided to take the conservative stance,” he says. “I admire the other places that are doing it, but we decided not to bring in something we don’t already have. Every once in a while that goes really bad.”

The textbook biological out-of-control took place in Hawaii in 1883, when sugar cane farmers imported mongoose from Asia to deal with rats. Unfortunately, the rats slept during the day, while the mongoose slept at night. Since the species never ran into each other, the mongoose instead ate the islands’ birds.

Modern researchers put much more thought into the process than 19th-century colonizers. For instance, in the battle against emerald ash borer beetles, certain species of wasps have been found effective, and two types of silverfly (which feed on eggs in the spring), as well as the Laricobius nigrinus beetles (which feed on adults in the fall), may be able to control hemlock woolly adelgid.

The 843 Laricobius beetles sitting in two cardboard boxes in the back of Dietschler and Lefebvre’s pickup truck on this day in October were collected from Western Hemlock foliage in the Pacific Northwest in their pre-pupae stage, sent to the Hemlock Initiative in Ithaca and placed into a pupation medium.

“Which is a nice term for dirt,” quips Dietschler. 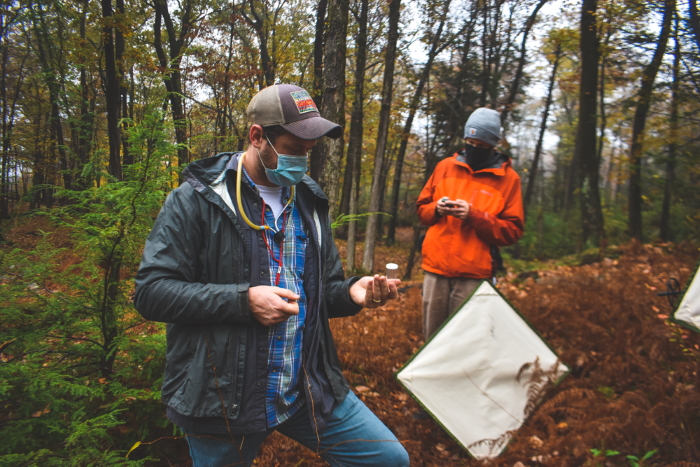 Marshall Lefebvre and Nick Dietschler of the New York State Hemlock Initiative on a mission at Harriman State Park (Photos by B. Cronin)

Once the beetles emerge, they’re ready for release. So far, the Hemlock Initiative has freed Laricobius beetles at 21 sites across the state. Since the beetles prefer warmer temperatures, most of the sites are in southern New York or near bodies of water such as the Finger Lakes. The institute began releasing the beetles at Harriman, which is located in Rockland and Orange counties, in 2018. Overall, more than 2,250 have been set free in the park since the program began.

Today’s plan is to check at the two sites where Dietschler and Lefebvre released beetles in 2019 to see if they’ve established a population. Then, Don Gabel, the director of plant health at the New York Botanical Garden, who’s here as a volunteer, will lead us off-trail and deep into the heart of Harriman to release the beetles in a stand of hemlock trees he’s picked out.

Looking for the beetles in the wild is like looking for a needle in a haystack when the needle is in constant motion and the haystack covers 47,527 acres. The most efficient method so far, and the one we will be using, involves a “beat sheet,” a large square of canvas supported by a wooden X. More than one hiker, upon seeing the sheets, asks if there’s a kite festival nearby. 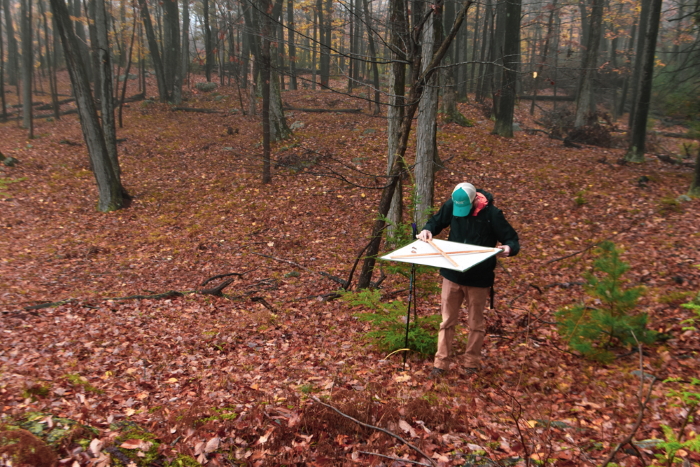 Searching for Laricobius beetles after beating a hemlock at Harriman State Park (Photo by B. Cronin)

To find the beetles, you hold the X under a hemlock tree. Then, using a ski pole borrowed from the park’s lost-and-found, you beat the tree. After all manner of things fall from the branches, you hold the sheet to your face to look for black specks that might be Laricobius beetles.

If one of the specks looks promising, an aspirator is deployed. This is a glass vial with a rubber tube running through it. You place one end of the tube in your mouth and the other tube against the speck and suck. (Lefebvre demonstrates how to make sure the filter is in place so the beetle doesn’t end up in your mouth instead of the vial.) Once encased, the speck can be identified.

If there’s any tree that could inspire people to tromp around the woods early in the morning to suck beetles up through a tube, it’s hemlock. Whitmore considers them the “Labrador puppies” of trees.

“There’s something about them,” he says. “The coolness in the summer if you hike through a hemlock grove, with their branches hanging over the waters of a local lake… I can’t fully describe it other than that they can’t be replaced by any other tree.” 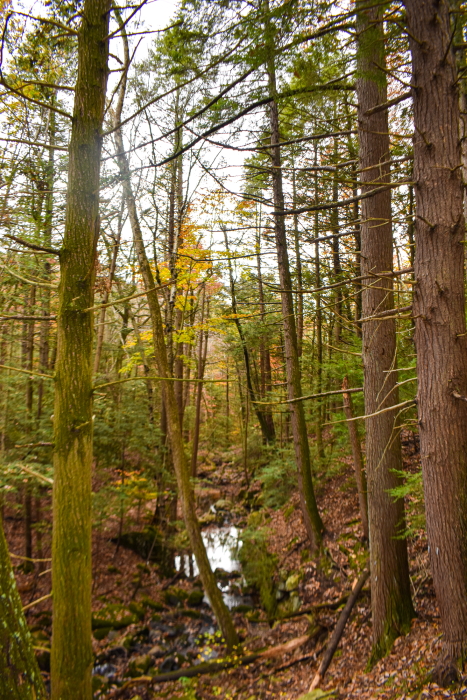 Stricken hemlocks at Mineral Springs in Black Rock Forest (Photo by B. Cronin)

Mineral Springs, on the southern border of Black Rock, is surrounded by hemlocks that are one of the only old-growth parts of the forest that remain. When European settlers began turning the forest into farmland, they were so awed by Mineral Springs that they left the hemlocks unscathed. (They were less awed by the springs, from which they took water to bottle and sell.)

Hemlocks play a pivotal role in the forest. Red squirrels and other species eat their seeds. Deer huddle under their branches during foul weather. Schuster has found the trees to be an invaluable component in the effort to reintroduce native brook trout because their dense branches keep the water cool. “They create, because of their shade, their own microenvironment,” he says.

Jonathan Rosenthal of the Ecological Research Institute in New Paltz refers to hemlocks as a foundational species that structure their ecosystem.

“Hemlocks determine the microclimate, the nutrient cycling — everything that’s there,” he explains. “When you remove hemlocks, that changes everything.”

Since hemlocks surround many upstate reservoirs, the New York City Department of Environmental Protection is especially concerned with their fate, because of fears that losing them would adversely affect the quality of the water flowing to more than 18 million people.

If the Laricobius beetles are at the first site we search, they must be dieting. Branch after overturned branch reveals swarms of fuzzy white hemlock woolly adelgids, and after we beat every hemlock in sight, no beetles appear. The ones that were released the year before appear to have failed. These trees will die.

At the second site, Dietschler finds a beetle with his first thwack. Everyone swarms around to look, and the mood turns from funereal to upbeat. “It’s usually not this easy,” he says. As the group continues to examine the hemlocks, the beetles are found with increasing frequency. 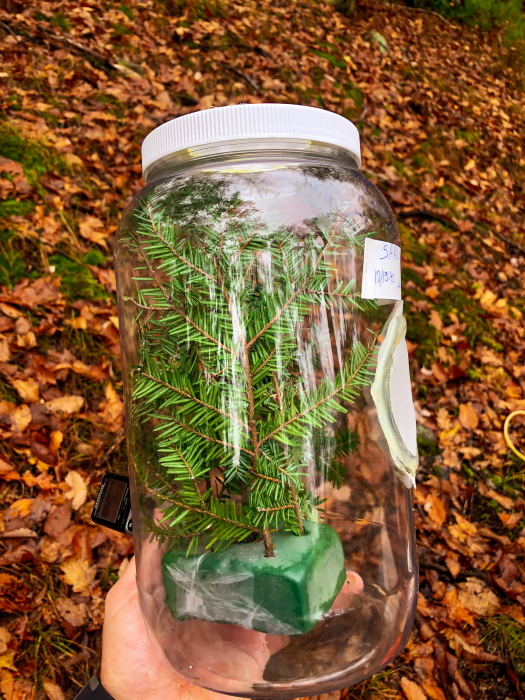 A jar of Laricobius beetles, ready for release (Photo by B. Cronin)

It’s not the first time released beetles have established themselves, but their sheer abundance here is particularly encouraging. “This is a huge thing,” says Dietschler. “I guess we should have brought streamers.”

As Gabel from the New York Botanical Garden leads us off-trail to the isolated release site, the discussion turns to how hemlock woolly adelgid treatments are evolving. Warming temperatures from climate change are increasing the spread of the adelgids northward. This year, the bugs were detected along the southern foothills of the hemlock-rich Adirondacks.

One of the day’s volunteers is Nick Marcet, who works for the state parks department and spends a lot of his time treating trees. In addition to the insecticide injections used on hemlocks near water sources, the department has started using a basal bark spray on larger groups of trees. Other state agencies are also stepping up their efforts. In October, the Department of Environmental Conservation individually sprayed 2,500 hemlocks and injected 80 more in the Adirondacks, and the Hemlock Initiative released 600 Laricobius beetles.

“Tree awareness and management is getting better,” says Dietschler. “Down south there’s a lot of robust treatment programs, and New York is catching up.”

Once we reach the site where we will release today’s army of beetles, 21 jars are taken from the two cardboard boxes, each containing a hemlock branch and around 40 beetles. Beat sheets are held under the branches as the jars are emptied on the trees, to catch any beetles that fall so they can be deposited back on the tree. 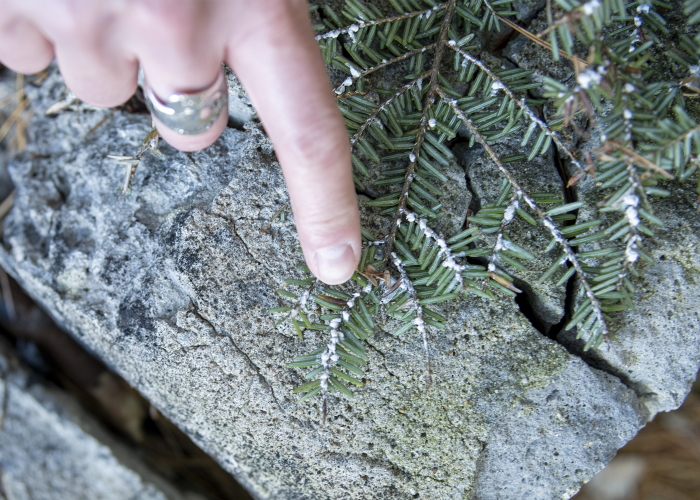 “They’d probably be fine in the soil, but we do that just to be nice to them and give them the best chance of survival — and to reassure ourselves we’re not stepping on them,” Dietschler says.

And then it’s over. The beetles have been freed. The equipment is packed. The trees will be checked next fall to see if the beetles established themselves. With this site so far off the beaten path, we’ll probably be the last humans to see these trees until then.

To the naked eye, the trees seem the same as any others. But they represent the hope that hemlocks can be preserved.

“It is kind of anticlimactic,” says Gabel. “But it’ll sink in later.”