Jamie Copeland knew something was up when the recipients of his annual holiday corporate gifts didn’t offer their usual enthusiastic thanks.

For years, he had asked a bakery to create batches of “stovies” from an old family recipe. But that year, he decided to try scented candles.

“One client told me, ‘My mouth was watering in expectation, then I opened up the box and it was just a candle,’ ” said Copeland, who owns Hudson Design in Garrison. 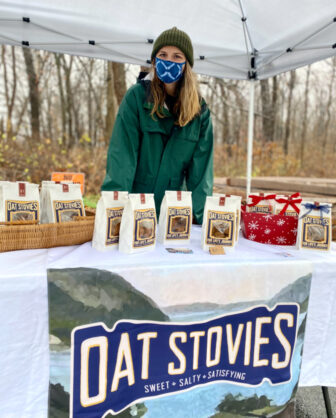 These days, you don’t have to be a Hudson Design client to get your own stovies. They are sold at the Cold Spring Farmers’ Market, the Cold Spring General Store, Solstad House in Beacon and at oatstovies.com.

The recipe is, naturally, a family secret, but the ingredients include oats, molasses, walnuts, sunflower seeds, coconut, chocolate, raisins, canola oil, eggs and brown sugar. In the interest of accuracy, I tried one — well, three — and can attest that they are complex and delicious.

As the family story goes, the edibles originated with rickets and scurvy.

In 1804, Thomas Masson, a young Scottish sea captain — and Copeland ancestor — invented a snack to ward off disease on long passages. Cooked on the galley stove like pancakes, the oat stovies quickly became a favorite among seafaring Scots.

So, what is a stovie? Is it a granola bar, or is it a cookie? “It’s even better,” says Copeland. His daughter, Beatrice, adds: “It’s more versatile than either; it can satisfy all sorts of cravings. It’s a great snack for hikers but also tastes good with a cup of coffee. And, it’s good for you.”

Traditionally, a stovie is a Scottish hodgepodge of leftovers, usually with a base of potato and onion mixed with beef drippings. Of course, the recipes have evolved and expanded. “This recipe had been in my mother’s side of the family,” Jamie says. “Leftovers from last night’s dinner, thrown together in a pot on the stove — a savory dinner. In our adaptation, instead of potatoes and meat, the stovie is sweet.” 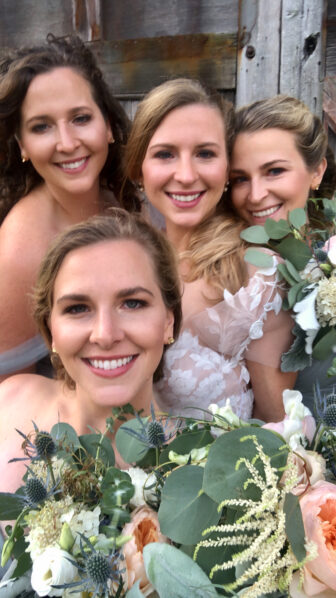 The Copeland sisters, from left: Eugenia, Beatrice, Marion and Margaret

According to Carolyn Copeland, Jamie’s wife and mother to Beatrice and her three sisters, it was daughter Eugenia who started the entrepreneurial ball rolling. “As a kid she sold them at the train station and at the golf course,” she said.

Carolyn, who is a musical theater producer, was dealing with that industry’s pandemic-induced standstill and turned her energy to, as her husband says, “baking, going in and putting the recipe together, getting it back at the right temperature.”

Beatrice, a film producer who lives in Manhattan, came home when the shutdown began, “and this became a great project to work on.” She developed a logo with the help of a friend who is a designer and a “rebranding” of the stovie began.

The rest of the family has contributed, as well. The eldest daughter, Margaret, who has two young children, lives in Virginia and runs a candle company, set up the internet sales. Marion, a physician and captain in the U.S. Army, promised to introduce stovies to the military.

Eugenia, an opera singer, will be taking the reins shortly from her parents, who have been baking stovies in the kitchen at Homestyle Bakery one day each week. “She’ll be heading up new sales opportunities,” her mother says.

“It’s a blessing to provide something people like,” Jamie says. “You give them a bag and they admit they ate half before sharing. One of the things Carolyn and I like to communicate to our children is your gifts are meant for other people. We love the fact that people love the cookie. So, we’re going to keep making them.”

Carolyn adds: “It has been something fun to focus on during these scary days.”