In the winter of 2014, I was exploring the woods behind Haldane when I came across an old beech tree some distance off the trail. I was impressed by its size and knew it must be very old — at least 60 years old, because there was an engraving in the bark, “JP 1954.” Of course, it is a wanton and selfish act to mutilate the bark of a tree but, at the same time, it’s kind of cool to carve your name.

I set to work with my Swiss Army knife on “MC 2014,” thinking that one day, years later, I would return to this spot with my children or grandchildren and point to the tree and tell them the story of JP and myself, 60 years later, and they would wonder at this. I secretly hoped that perhaps another anonymous woods explorer would happen upon the tree, decades later, and leave his or her mark. In the years since I have often returned to this tree and thought about time and other things. 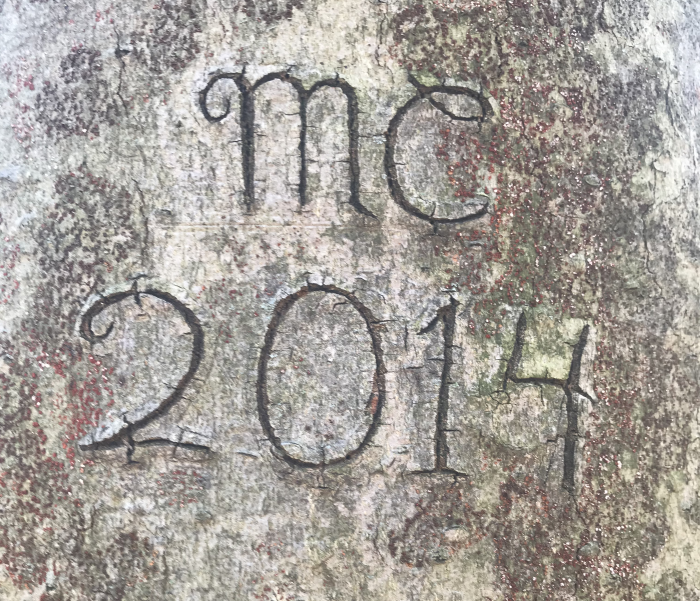 It has been two or three years since I last checked the tree, but while walking my dogs, something moved me to visit. Beeches are usually easy to spot in the winter because they hold onto their leaves and their bark is gray like elephant skin. Unfortunately, this is no longer the case with the beech. The bark was black and withered. You could still see my engraving, but JP’s was barely visible through the mold. I looked up toward the canopy and found that some of its limbs were barren and the bark was peeling away.

The beech tree I love is dying. “It is an old tree, after all,” I thought. “All things come to an end.” I had contented myself with that thought until I got home and found a copy of The Current on my dining room table, with Brian PJ Cronin’s article, The Fading Forest (Dec. 11). I was disheartened to learn that there are a slew of diseases threatening beech trees across the Hudson Valley and beyond. I knew about the hemlock and ash blights, but the beech diseases were news to me. It dawned on me that it may not be old age killing my beech.

Last year I had an argument with a friend about invasive species. She said that, invasive or not, it’s all life and should be respected and accepted. In my opinion, anything that reduces biodiversity is bad for all life. Perhaps we should adjust our rhetoric around the problem, taking care to use non-native instead of invasive, but when it comes to preserving our tree diversity, I am a dyed-in-the-wool nativist.

Cronin mentioned how the ash blight is an existential threat to the Mohawk people because they use materials derived from black ash in their sacred ceremonies. As an undergraduate, I had the privilege of spending some time in Kahnawake, a Mohawk reserve outside Montreal. During a class in traditional medicine, the elder said, “The forest is suffering.”

The second part of Brian Cronin’s important series, which focused on the glorious and threatened Eastern Hemlock, surely touched the nerve of any Highlands resident who values this grand, dying species.

Anyone whose heart leaps high upon approaching our tall hemlock forests will find it soar higher still upon catching sight of Tsuga Canadensis f. Pendula, the amazingly beautiful weeping sport of the towering ones, discovered near Beacon between 1857 and 1868 by Gen. Joseph Howland and planted at his home in Matteawan (now Beacon) and, as of 1980, in good health at 13 feet high and 36 feet wide.

This mutant was named by Henry Winthrop Sargent, a botanist living at the time in Beacon, and is commonly known as the Sargent’s Weeping Hemlock. Lasting near to infinity, these trees are treasured throughout the East Coast as objects of rare beauty. Together with their tall parent, we must do all possible in the Highlands to preserve them. I hope Brian’s story will help.

I just spent a considerable amount of money taking down seven ash trees on my property, all victims of the emerald ash borer. I would have rather spent the money planting new trees.

One thought on “Letters: The Fading Forest”