Linda Weaver’s bout with COVID-19 has been longer than most.

For months after fighting body aches, fever, neck pain and fatigue as the virus ravaged her body during its initial infection back in late-March, the Cold Spring resident fended off recurring health problems: forgetfulness, mental “fogginess” and fatigue so profound she told her business partner she might be unable to work some days.

“I’ll be sitting at my desk at my home and I just can’t stay awake,” said Weaver, 68, a talent agent for voice-over artists. “I am so tired, I can’t do one more thing.”

While most people who contract COVID-19 are symptom-free within a few weeks, Weaver is a so-called “long-hauler,” a subset of coronavirus survivors who experience sometimes-severe fatigue, muscle aches, shortness of breath, difficulty concentrating, forgetfulness and dozens of other symptoms months after the initial acute-illness period of roughly two weeks.

A telephone survey by the Centers for Disease Control and Prevention of COVID-19 patients released in July showed that 35 percent reported they had not returned to their pre-virus health two to three weeks after being tested, including 26 percent of respondents 18-to-34 years old and 47 percent of those 50 and older.

A survey of “long-haulers” conducted by an Indiana University School of Medicine researcher and the grassroots support group Survivor Corps, also released in July, reported that 26 percent of post-COVID-19 symptoms were described as “painful.”

While doctors are unsure why problems continue months later, the plight of these COVID-19 victims is drawing attention. Last month, Dr. Anthony Fauci, the director of the National Institute of Allergy and Infectious Diseases, called the issue “a phenomenon that is really quite real and quite extensive” during his opening remarks for a National Institutes of Health workshop on the long-term health problems caused by the virus.

Locally, the Westchester Medical Center Health Network in October launched a Post-COVID-19 Recovery Program at its main campus in Valhalla, joining a growing list of hospitals developing initiatives to treat and monitor people with enduring symptoms.

In the months following the start of the pandemic in March, Westchester Medical Center treated about 600 people who had reported symptoms long after their initial infection, said Carol Karmen, an internal medicine specialist with WMCHealth Physicians and one of the clinical leads for the program.

Many of the people experiencing long-lasting health problems were healthy before becoming infected and were not among the “sickest” with COVID-19, said Karmen. Some of them, despite severe symptoms, have met with a lack of sympathy from employers when unable to work, she said.

Randy, a Beacon resident who asked that his surname be withheld to protect his privacy, said he began feeling COVID-19 symptoms, including body aches, chills, fatigue and a sore throat, in early March.

His health improved after about two weeks, but then, in April, “all of the symptoms came back but stronger.” Randy said he had “difficulty breathing, where I couldn’t take a deep breath. I developed severe insomnia, I couldn’t sleep at all, I lost my appetite; I had really bad flu-like body aches.”

“My limbs would go numb and I lost about 20 pounds over the course of that month,” said Randy, who in May was diagnosed with pericarditis, an inflammation of heart tissue that can be caused by a viral infection.

Heart palpitations and chest pain are some of the other cardiac problems reported by long-haulers, Karmen said, adding that patients seen by WMCHealth are also reporting hair loss.

People sick with COVID-19 often lose their ability to smell and taste but can expect those senses to improve as the infection wanes. But some long-haulers have gone months without regaining those senses, Karmen said.

“Say they got sick in March or April. Now, it’s December and they still have trouble with tasting and smelling,” she said. 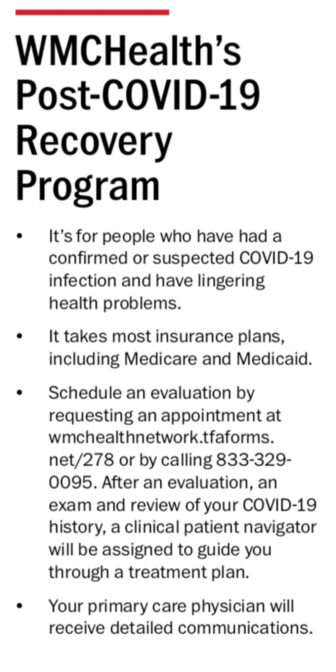 WMCHealth’s program, has a range of specialists — cardiologists, pulmonologists, neurologists, nephrologists, etc. — to treat people with post-COVID-19 symptoms. In addition to the hundreds of long-haulers WMC doctors were following before the program’s launch, another 100 or so people have joined since October, Karmen said.

Many of them are grateful to have their symptoms taken seriously, “because a lot of them had been dismissed by other doctors and they haven’t been able to get the proper care,” she said.

“We’re not talking 10 or 20 patients; we have thousands of patients who experienced COVID,” he said.

Randy has enrolled in Mount Sinai Hospital’s Center for Post-COVID Care, which he discovered at an online support group for long-haulers created by Body Politic, a wellness website. Each day he enters his symptoms in an app provided by Mount Sinai and once a week meets with a doctor by videoconference.

His health improved over the summer, but “it’s like sore and painful” when he takes deep breaths, his limbs sometimes go numb and he still has trouble sleeping.

While “it’s been good to have the support of some doctors who are on the front lines of trying to understand this virus,” the lingering health problems can be “extremely frustrating,” Randy said.

“There’s a lot of fear that I’ll never be back to my health pre-COVID,” he said.