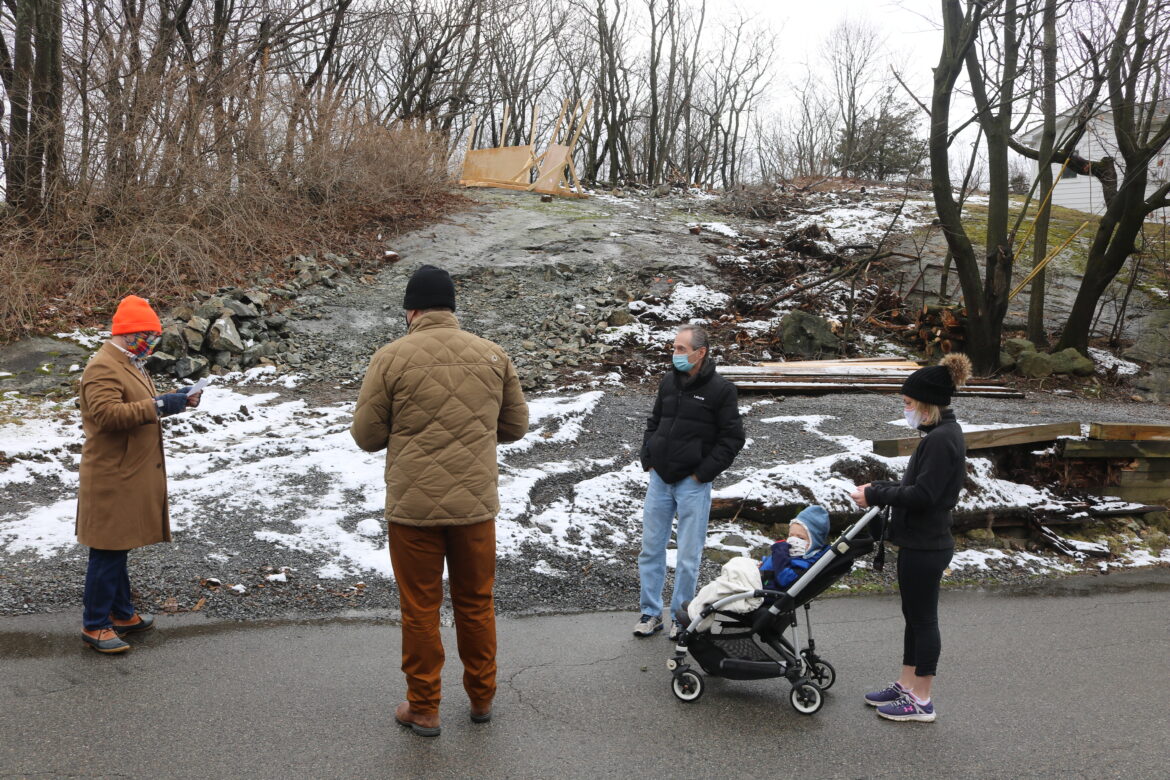 Members of the Historic District Review Board visited 29-31 Rock St. on Jan 4. (Photo by M. Turton)

Citing possible litigation, Mayor Dave Merandy, at the Tuesday (Jan. 5) meeting of the Cold Spring Village Board, was cautious while addressing concerns raised for the second time in a month by neighbors of an excavation project at 29-31 Rock St.

“I have to be careful in what I say,” Merandy explained, adding that he has discussed the project with Village Attorney John Furst.

A month earlier, at the board’s Dec. 8 meeting, 10 residents of Rock Street and Kemble Avenue had raised concerns over safety in the area as well as the appropriateness of a permit issued by Code Enforcement Officer Charlotte Mountain that allowed the property owner to extend a driveway and parking area.

The excavation of the site’s steep rock outcrop began on Dec. 2, but Mountain issued a stop-work order two days later after residents complained that a lack of adequate barriers resulted in flying rocks hitting houses and cars.

The permit application was referred to the Historic District Review Board, which held a public hearing on Dec. 23 that will continue on Jan. 13. Members of the review board visited the site on Monday (Jan. 4).

The site, which lies within the village’s historic district, has raised concerns with the board because of the potential adverse effect on the area’s natural resources, principally the large rock outcrop.

Several neighbors attended the Tuesday Village Board meeting. In earlier correspondence, they asked the Village Board to require the owner to complete a comprehensive safety plan if the excavation is allowed to continue. They also asserted that the project requires street opening and driveway permits, and requested that the project be referred to the Planning Board for review.

Merandy said the board agreed on the need for a safety plan. “We understand that loud and clear,” he said.

However, the mayor said that, based on discussions with Furst, the “street opening” section of the village code refers to digging into a street for utility connections and doesn’t apply to the Rock Street project. He added that the driveway in question “has been there for a very long time” and that he will leave it up to the code enforcement officer to determine if a driveway permit is required.

Merandy said Furst agreed with his assessment that the project should not go to the Planning Board, whose chair, Matt Francisco, offered the same opinion at the Dec. 8 meeting.

Village Trustees Kathleen Foley and Heidi Bender suggested the board meet with Furst to better understand his interpretation of the issues raised by the project, which Merandy said he would arrange.

Michael Reisman, an attorney who has served on the village Comprehensive Plan Special Board and the Code Update Committee, was one of the residents who attended the meeting. He wrote in an email on Jan. 7 that “it is disappointing that the Village Board apparently does not wish to address the systemic consequences of the massive construction project on Rock Street in terms of code enforcement and public safety.”

A resolution will be introduced at the board’s Jan. 12 meeting authorizing the purchase of a new Kenworth garbage truck at a cost of $108,524, plus $8,500 to mount the cargo box on the chassis. Insurance will cover $27,000 of the cost. The former truck was severely damaged last winter in an accident on icy roads. The board is also considering the purchase of a new dump truck that could cost as much as $100,000.