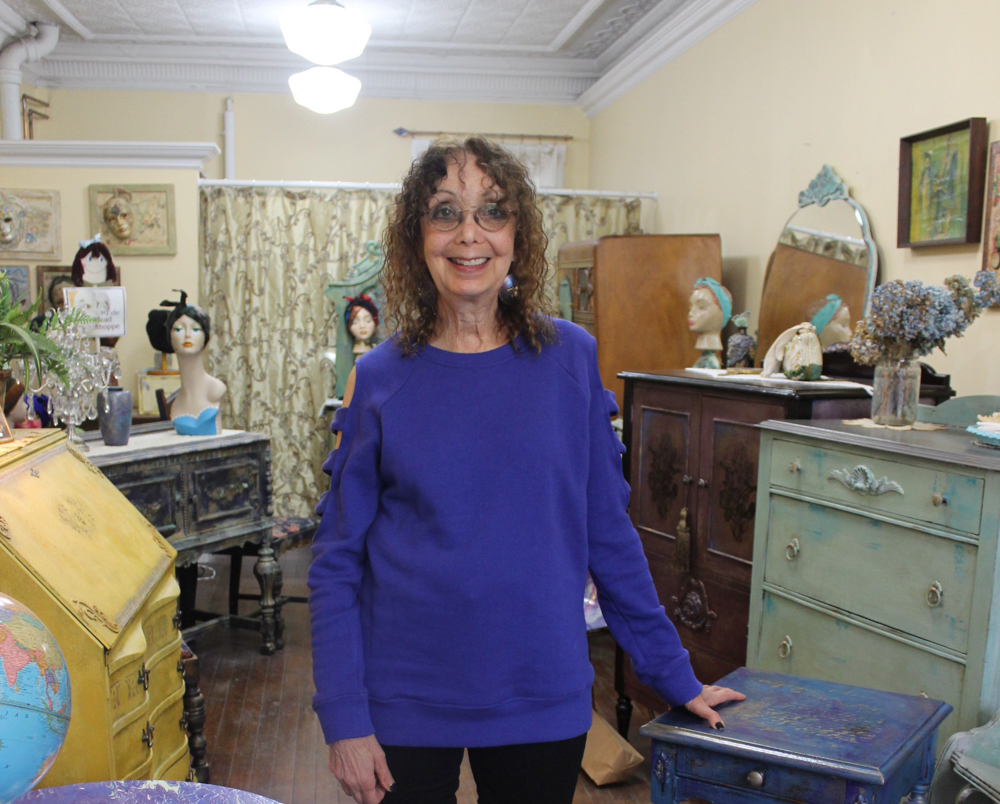 Judie Gordon, in her long and narrow shop (Photo by A. Rooney)

Judie Gordon has adapted and survived

She’s not in it for the money, which Judie Gordon concedes is convenient, because even in the best times, the profits have never been sky-high at Judie’s Bungalow, the boutique she has operated on Main Street in Cold Spring since 2005.

“There are months you don’t make it at all, but you just have to keep going,” she says of the store. “It’s my passion to get up and work; I don’t want to be home 24/7. It keeps my sanity.”

If you recall going into the shop for a manicure or a haircut or to browse the jewelry collection, your memory is correct. Gordon has refashioned — not for the first time — her business into a decorative furniture emporium, although some jewelry remains.

“I started to do mixed-media art canvases about five years ago,” she explains. “I got very involved in the paintings, masks, ornaments. Everything has the same flavor, a little Victorian, a little edge to it, some Tim Burton. With what’s happened since March, I became more interested in doing furniture because it’s just another canvas, it’s all related.” 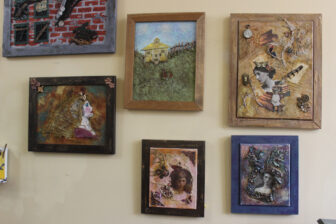 Mixed-media artwork by Judie Gordon (Photos by A. Rooney)

Gordon visits estate sales to find furniture she can transform with paint, patinas and decorative flourishes. Inside her long, narrow store are as many chests of drawers, end tables, chairs and other furniture as she can fit.

To aid in the transformation, Gordon uses chalk paint — Judie’s Bungalow has just been named an official Dixie Belle retailer — augmented with moldings and patinas. “The furniture pieces look kind of Shabby Chic-y, with many textures,” she says.

She changed the name of the shop from Simply Elegant to Judie’s Bungalow about a year ago because, she says, “it’s my gallery and my studio. I want word to get out, because it’s not the easiest thing with walk-in people. This is not an impulse buy — it’s much harder [to sell] than a canvas or a mask.”

Gordon grew up in Queens and moved to Mahopac 33 years ago. “I was designing and making jewelry and looking for a spot to anchor my jewelry,” she recalls. “I went into Mount Kisco to show my jewelry to a nail salon for display. One day the owner asked me would l like to learn nails. I wound up getting my license and loving it, mostly because it was social, as opposed to just making jewelry in my house.” 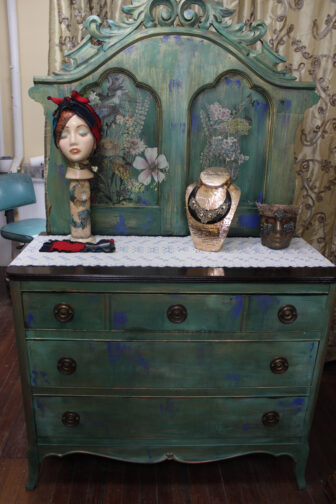 A moody chest of drawers painted and decorated by Judie Gordon

A woman she had worked with in Mount Kisco owned Simply Elegant and asked Gordon if she’d be interested in taking over. “I knew Cold Spring well enough from weekend antiquing; I had strolled up and down Main Street many times,” she says.

Gordon kept the name “just because it was easier than changing it. It was a struggle. I didn’t regret it but found it hard right away making expenses. But I loved what I was doing and I finally was able to have a whole section devoted to my jewelry,” which she describes as “mostly metals, with a Victorian look. Some has a bit of a gothic flavor. It’s not like anyone else’s.”

Still, she soon realized that making a profit on $15 manicures was too difficult, and cutting hair worked for a while but “there were too many hair salons around, and we’d get customers coming from all over on the weekends but not locals. You need people who use your services regularly, and I didn’t have that.”

Cut to the present. Gordon refers to the space as “my gallery and my studio.”

Fifteen years in, Gordon now has a grown daughter and a semi-retired husband. “He keeps saying, ‘Enough already.’ When we started in jewelry 40 years ago everything was in one little jewelry case. Now it’s tents and tables and stands. He’s always schlepping something. It’s good that I have the shop to go to. That’s about the size of it.”

Gordon says she has no plans to retire. Asked for her advice to a new shop owner in Cold Spring, she had to ponder her response a bit. “It depends on your business,” she says. “Food establishments do pretty good, but lots of others are hit or miss. You should come up on the weekends, see the crowds, see the stores they’re going into. Don’t depend on the people who live in the area. Observe in winter. You have to do your homework. It’s a crapshoot, really.”

One thought on “Open by Innovation”