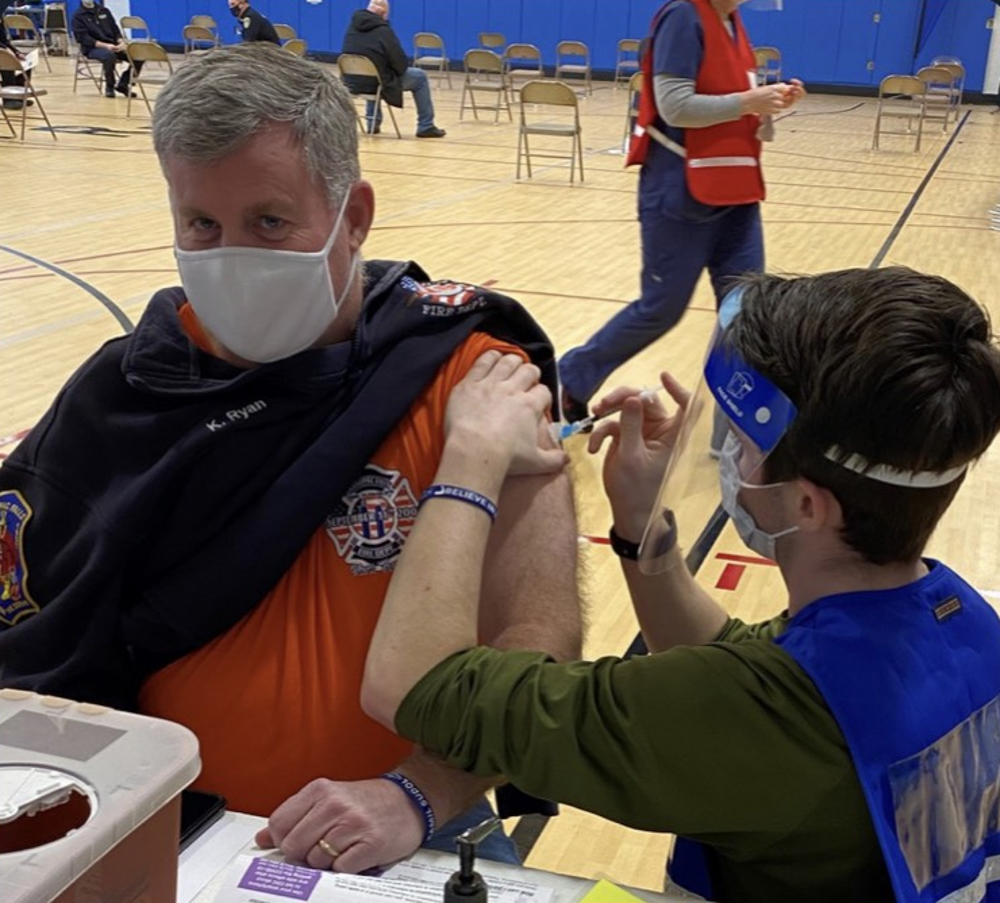 More than 3,000 people on waiting list at Drug World

Through a whack-a-mole effort requiring multiple clicks of his web browser’s “refresh” button on Sunday (Jan. 10), Osterfeld, a Cold Spring resident and teacher at the Manitou School, scored an appointment to receive a COVID-19 vaccine the next day.

Roth, 79, and a Beacon resident, met an obstacle course of busy signals, a list of Rite Aids that have yet to start giving vaccines and an hour-long wait on hold after calling the state’s hotline on Tuesday (Jan. 13).

The runaround resumed on Thursday morning, when she called the Dutchess County Office for the Aging, was given a number that turned out to be the state’s number for testing and was redirected to the state’s vaccination hotline again. She was unable to get through “due to high call volume.”

“I am feeling kind of defeated at this point,” said Roth.

An estimated 2.1 million people, including frontline health care workers and nursing home residents and staff, were eligible to receive vaccines when New York begin distributing its first doses on Dec. 15. Then, with doses sitting unused and criticism mounting over a slower-than-predicted rollout, the state expanded eligibility over the last week to include an additional 5 million people, including teachers, first responders and residents over 65 years old.

The expansion has unleashed a flood of calls to local health departments and pharmacies, and the state’s vaccination hotline, as residents race to book appointments that disappear shortly after they open, and as New York and other states call on the federal government to send more doses.

The frustration was borne out in comments posted by Putnam and Dutchess residents at highlandscurrent.org in response to stories last week about the first vaccines being given in the Highlands:

■ “I have not been able to reach any of the sites for an appointment. I am 84 years old and my husband at 83 has several health issues, including heart and lung. I do not want to bring infection to him. When and where can I actually sign up? The NYS website is non-responsive.”

■ “Please let us register for the vaccine. We are 77 years old and have been trying for the past two days. Please help us.”

Dutchess County typically receives 100 calls from residents on Mondays, but on Jan. 11 got 5,773, according to County Executive Marc Molinaro. Drug World in Cold Spring began taking appointments for vaccinations the same day. As of Wednesday, its waiting list stood at 3,300 and was closed, according to owner Heidi Snyder.

When Dutchess announced on Saturday (Jan. 9) that it was opening three sites for vaccinations, the slots were filled in less than an hour, said Colleen Pillus, a county spokeswoman. Because the state allows people to look outside their counties for vaccines, Dutchess is also receiving calls from non-residents, she noted.

On Tuesday, Alex Azar, the secretary of the federal Department of Health and Human Services, announced that all doses on hand would be released to states, rather than holding them for second doses, to accelerate the pace of vaccinations.

On Friday (Jan. 15)  the Washington Post reported that no reserve existed because the federal government had been sending states all available doses since December.

Karen Kapoor, a Cold Spring resident who teaches at Hudson Hills Academy in Beacon, received an email on Saturday with links to places in Dutchess County filling appointments, but “every link I clicked on said ‘event full,’ ” she said. The next day she received a link a friend used to get an appointment at Putnam Hospital Center and “got in immediately,” booking a slot for Feb. 11.

Kapoor forwarded that link to other teachers at Hudson Hills and a couple of them used the link “within 15 or 20 minutes, and they already were bumped to Feb. 17,” while some of them who delayed for an hour to two hours “were now bumped to March,” she said.

“And one of them waited more than two hours and she can’t get in,” said Kapoor.

Roth, who lives independently with her son, started with the state’s “Am I Eligible?” website, which generates a list of vaccine sites after users input personal information and identify which category of qualifying groups they belong to.

Steps Toward a Vaccine

To make an appointment at non-state sites

Check with local healthcare providers, health departments and pharmacies for availability. (The state is warning that anyone needing a vaccine will likely have to wait at least 14 weeks.)

To make an appointment at state-run sites

She received a list that included Rite Aids in Beacon, Poughkeepsie and Montgomery, and Drug World in Cold Spring. Each of the Rite Aids had the same message: “Scheduling will start in the next day or two; please check back.”

Her first call to the state’s hotline, on Tuesday, began with someone telling her to call back at 4 p.m. to get an appointment. The call back began with a busy signal and then someone answering and immediately putting her on hold.

While Roth and others wait, the number of vaccination sites and clinics is growing.

Drug World expects to receive 200 additional doses today (Jan. 15) and has scheduled an appointment-only clinic for today and Saturday in the Parish Hall at St. Mary’s Episcopal Church.

Putnam County held two vaccination clinics this past week. One took place on Monday at the Carmel Friendship Center, and a second at the Philipstown Recreation Center on Thursday, with 100 vaccines for residents 75 and over and 200 for educators and first responders.

“The supply of vaccine is limited now, but as our allocation from the state increases, we will quickly ramp up and serve many more people on both sides of the county,” said MaryEllen Odell, Putnam’s county executive.

(On Friday, the Philipstown town clerk asked residents to stop calling Town Hall about vaccinations. “Philipstown is simply providing the Recreation Center as a vaccination venue for the Putnam County Health Department. You must schedule appointments through New York State,” said Tara Percacciolo in a statement.)

Dutchess has opened three points of dispensing, or PODs, at the county Department of Health in Poughkeepsie; the former JCPenney store at the Poughkeepsie Galleria; and Dover High School in Dover Plains.

The state also has opened vaccination sites at four locations: the Westchester County Center in White Plains; the Javits Convention Center in New York City; the New York State Fair Expo Center in Syracuse; and at Jones Beach. Another site is scheduled to open at SUNY Albany.

Although Kapoor has to wait until next month, she felt “a big relief” when her appointment was confirmed. As a teacher at a school whose classes are all in-person, she worried about getting infected and transmitting the virus to her husband and sons.

“I feel like me getting it kind of inoculates my whole family,” she said.

5 thoughts on “Busy Signals for Vaccine”