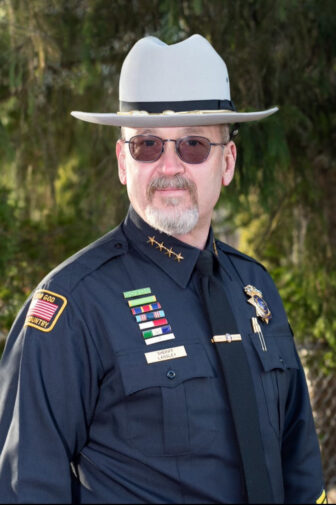 The Philipstown resident was elected in 2017, narrowly defeating Don Smith, who had been sheriff for 16 years. Langley said last month that he planned to run again.

Nancy Montgomery, who represents Philipstown and part of Putnam Valley on the county Legislature, has not announced whether she will run for a second, 3-year term, saying she is waiting for an invitation from the committee. It will meet in early February to make further nominations.

Montgomery, who is the sole Democrat on the nine-member panel, defeated Republican incumbent Barbara Scuccimarra in 2018 with 58 percent of the vote.

Unless voting is delayed, as it was in 2020, Nelsonville will hold an election in March for the two-year board seats held by Lisa Mechaley and Dove Pedlosky.

In November, the Cold Spring Village Board seats held by Mayor Dave Merandy and members Marie Early and Fran Murphy will be on the ballot, and in Philipstown, the two-year supervisor position held by Richard Shea and four-year board seats held by Michael Leonard and John Van Tassel will be up for a vote.

Six of the seven Beacon council seats will be on the ballot in November, with the exception of that held by Mayor Lee Kyriacou, who is a member of the council but serves a four-year, rather than two-year, term. Every seat in the Dutchess County Legislature will also be on the ballot, including those that represent three wards in Beacon (held by Nick Page) and that includes the 4th Ward (held by Frits Zernike).

Three of the nine Putnam Legislature seats — those held by Montgomery, whose district includes Philipstown and part of Putnam Valley; Ginny Nacerino, who represents Patterson; and Joseph Castellano, who represents Brewster and parts of Mahopac, Croton Falls and Southeast, will be on the ballot. The terms are three years.

School boards are scheduled to hold budget and trustee elections in May, although they were delayed in 2020 because of the pandemic shutdown. The seven-member Garrison board will have three seats on the ballot (those held by David Gelber, James Hoch and Madeline Julian); the five-member Haldane board will have two (held by John Hedlund and Margaret Parr); and the nine-member Beacon board will have four (held by Elissa Betterbid, John Galloway Jr., Jasmine Johnson and Flora Stadler).