While negotiating a provision in the annual defense authorization act that banned the creation of new anchorages in the lower Hudson River for oil tankers, some Republicans in Congress suggested to Rep. Sean Patrick Maloney, the Democrat whose district includes the Highlands, that the anchorages should be banned for only 25 years. 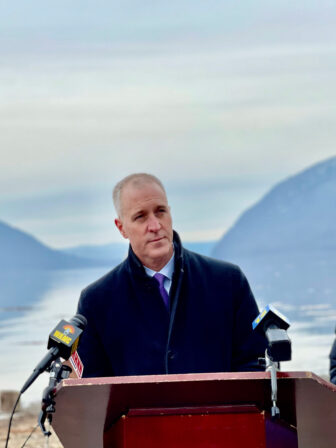 Rep. Sean Patrick Maloney spoke at a news conference on Monday (Jan. 11) about the passage of a law that bans new barge anchorages on the Hudson River. (Photo provided)

“I said, ‘I’ll tell you what: Let’s do it forever,’ ” said Maloney at a news conference on Monday (Jan. 11) at Plum Point in New Windsor, in the shadow of Storm King. “In the future if you want to undo it, you can come talk to us and tell us why you want to screw up the Hudson River.”

The defense bill, including the ban on new anchorages, passed the House and Senate but was vetoed by President Trump. Both houses then overrode the veto.

Maloney’s provision, included in the act that authorized funding for the U.S. Coast Guard, bans new anchorage sites for barges and tankers between Yonkers and Kingston. Maloney chairs the Coast Guard and Maritime Transportation Subcommittee.

Paul Gallay, the executive director of Riverkeeper, praised the law at the news conference. “This is the way government is supposed to work,” he said.

In 2016, the Coast Guard, at the request of the Tug & Barge Committee of the Port Authority of New York and New Jersey, proposed creating 10 overnight anchorage spots for barges in the Lower Hudson, including a 445-acre anchorage in the river between Beacon and Newburgh. Currently, there is one anchorage spot near Hyde Park that can handle up to three barges.

Proponents said the additional spots were needed to safely support an expected influx of barges carrying Bakken crude oil that would be coming upriver over the next several years to be sold in the Port of Albany. The “parking spots” would allow captains to rest instead of making the trip to Albany nonstop. 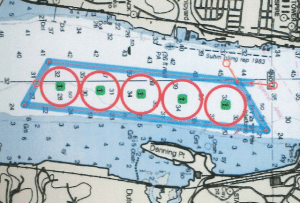 A map of the five barge parking spots proposed between Beacon and Newburgh.

The Coast Guard received more than 10,000 comments on the proposal, with 98 percent of them negative. Business owners and developers in Yonkers, Newburgh and other cities with newly developed waterfronts said their views would be ruined, especially at night when the anchored barges would be illuminated by throngs of floodlights. Marine biologists said the massive anchors could destroy endangered sturgeon habitats. Water-quality experts warned that a spill of Bakken crude would be disastrous because it mixes into the water column much quicker than other oils and is notoriously hard to clean up.

Maloney said there were suspicions that the industry’s motivation for wanting more anchorages was not safety but profits.

The proposal “was about being able to store oil close to market, and using the Hudson River as an archipelago of storage facilities, which would have been a blight on the river, an environmental hazard, a national security danger to places like West Point and others, and it would have been a terrible mistake,” he said. “And this was a result of the compression in oil prices because they wanted to be able to keep it closer to market but not necessarily deliver it until an opportune time. Nothing to do with anything that benefits anyone locally.”

Steve Stanne, president of the Beacon-based Clearwater, said that while the Hudson is “a working river,” its ship traffic has never required more anchorages.

“Until the time when we can hopefully use other sources of fuel, we’ll need that local, regional traffic,” he said at the news conference. “But the huge volume that came from the Bakken crude will now be prevented.”

Although the anchorage plan was withdrawn by the Coast Guard, lawmakers pressed ahead to prevent similar proposals.

A separate bill introduced in the House by Maloney and enacted last month will help communities prepare for sea-level rise and increased inland flooding expected in the coming decades because of global warming. It will also require greater use of natural and nature-based solutions for flood resilience and expand coastal protection studies to engage communities of color, Native American tribes and low-income communities.

“How we got a bipartisan bill that assures that the Hudson is protected from climate change, from this Congress, in this time of the world, there has to be some Nobel Prize for legislation,” said Gallay.