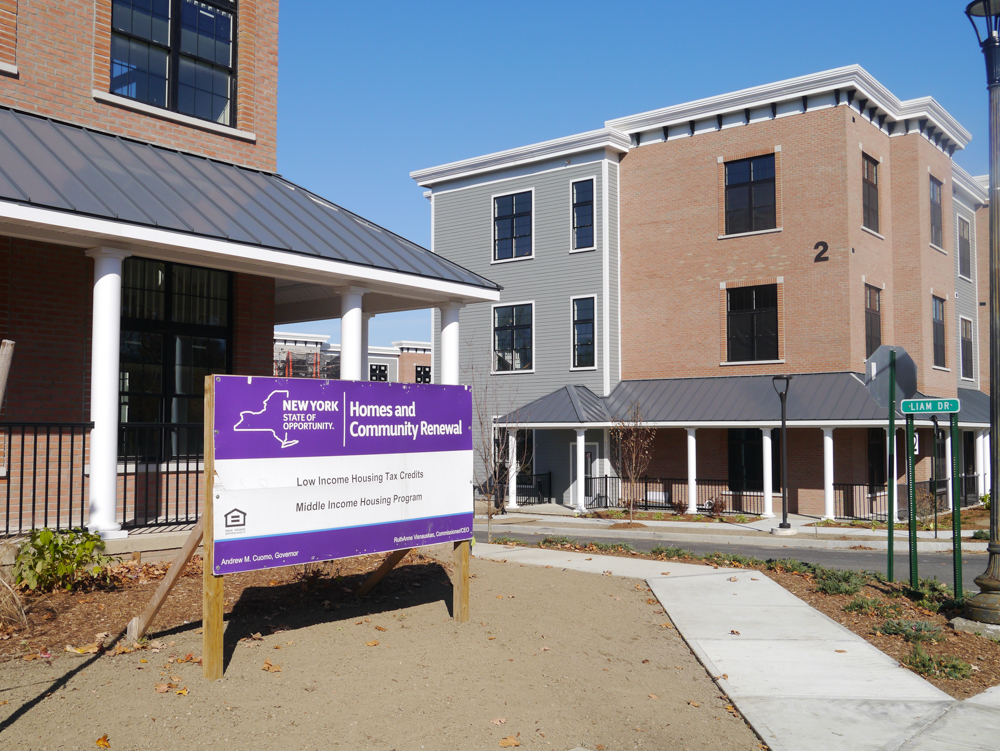 The West End Lofts, which include 72 units of affordable housing, were approved by the city Planning Board in 2017 and completed last year. (File photo by J. Simms)

Nearly two years ago, I wrote about the ongoing City Council discussion regarding affordable housing in Beacon. At the time, the first apartments built as part of the city’s workforce housing program were becoming available, but at prices (beginning at around $1,500 per month) some found startling.

Later that year, the council talked about utilizing the Emergency Tenant Protection Act, a state law that allows counties to create boards to enforce rent stabilization. However, some of the steps required, including a citywide housing survey, were pushed to a back burner when the COVID-19 shutdown hit several months later.

In the two years since, the city has heard consistently from residents that what’s been done isn’t enough. The discussion will be revisited again soon, and I expect there will be a significant push to get something done, ongoing pandemic or not.

Council Member Dan Aymar-Blair said during a meeting this month that “we made a lot of progress bringing new development into balance last year, but we haven’t fulfilled our obligation to the public to truly get development under control until we get the prices under control.”

He went on to cite several segments of the city’s population he believes are being priced out: senior citizens who can’t afford to downsize, college students who can’t move home with their degrees and working class, mostly non-white, residents who simply can’t make ends meet.

The numbers back him up.

Last month, according to OneKey MLS, there were 16 houses for sale in Beacon. The median price for a single-family home of about 1,700 square feet was $440,000. Joe Czajka, the executive director of the Pattern for Progress Center for Housing Solutions & Community Initiatives, says a household would need to make $138,000 annually to buy that much house and stay within the “affordable” range, which is spending 30 percent of income on housing, including property taxes.

The median household income in Beacon — according to U.S. Census numbers, which differ from Housing and Urban Development (HUD) statistics that break households down by size — is about $71,200, or enough to buy a $220,000 home. Of the 16 listings last month, the lowest was $245,000 — and it needed work.

Like everything else, the pandemic is partly to blame.

For renters, there are about 2,200 units in Beacon, more than 800 of which are subsidized through federal programs (commonly called Section 8), a state-funded program or are part of the city’s workforce affordable program, which gives priority to volunteer emergency responders who have served at least five years, followed by municipal and Beacon City School District employees.

With about 37 percent of its apartment stock subsidized, “that’s a pretty healthy number for any one community,” Czajka said. “But it’s not as simple as saying, ‘We’re over a third, so that’s good enough.’ ”

Daniel Aubry, a Beacon real estate agent who in 2017 brokered the $5.5 million sale of the former Craig House property, agrees that there is an affordability problem because the city has far more demand than inventory. Aubry also, understandably, says that the municipality has to make it worthwhile for a developer to create below-market-rate housing.

“Renters have been getting screwed in Beacon for a long time,” Nelson said, calling the problem “10 times worse” in Beacon than in New York City.

“If they’re given the proper incentives, there’s no reason they wouldn’t want to do affordable housing,” he said. “The need is there. But the dialogue can’t be confrontational. It has to be collegial.”

I’ve heard talk about a number of scenarios Beacon could pursue.

Council Member Terry Nelson has pushed for the city to ask Dutchess County to create a board under the Emergency Tenant Protection Act that would set maximum allowable yearly rent increases. Nelson said he’s heard of constituents forced to endure “micro-aggressions” from landlords, such as withholding mail or repairs and other services until the tenants leave, allowing the landlord to increase the rent.

“Renters have been getting screwed in Beacon for a long time,” Nelson said, calling the problem “10 times worse” in Beacon than in New York City.

It’s unlikely, however, that the ETPA would impact many people in Beacon because it applies only to apartment buildings with six or more units that were built before 1974. The buildings also must not have been “substantially rehabilitated.”

The City Council could also bump up what Czajka calls the “set-aside,” or the percentage of affordable units that must be included as part of a new development. Right now, developments of 10 or more apartments must set aside 10 percent of the units as below-market rate.

The council could increase that percentage, but even if it’s doubled, we’re probably only netting a handful of extra units.

In an interview last month, Mayor Lee Kyriacou mentioned the possibility of the city exploring other projects such as the West End Lofts near City Hall. In 2016, then-Mayor Randy Casale and the council agreed to sell the 3.14-acre parcel to developer Ken Kearney at less than market value on the condition that he build affordable units there.

Seventy-two affordable apartments, including 50 live/work spaces for artists, now make up the bulk of that development. I’d be interested to know if the city owns other land or buildings that could lead to another deal like that.

The cost of living is rising faster than wages virtually everywhere, forcing people all over the region and country farther from their jobs.

There’s the 39-acre former Beacon Correctional Facility site (“Camp Beacon”), but it’s owned by the state. In 2019 state officials selected a New York City company called Urban Green Food to create a “bike farm” with a hotel and track-and-field venue at the site, but there’s been little movement there because of — you guessed it — the pandemic.

When we spoke, Czajka made another interesting point: This may not be exclusively Beacon’s responsibility. The cost of living is rising faster than wages virtually everywhere, forcing people all over the region and country farther from their jobs.

In northern Dutchess County, the communities of Amenia, Millerton and Pine Plains have formed a coalition to address affordable rural housing. That’s not a particularly palatable answer for the multi-generational Beacon families who can no longer afford to stay here, but perhaps it’s a component of a greater plan.

I’m eager to see what the mayor and City Council can come up with this year to help the folks who want to live, and stay, in Beacon.

2 thoughts on “Reporter’s Notebook: Does Beacon Have Enough Affordable Housing?”