The last two Wednesdays have been traumatic. Everyone is glued to the news and cannot turn away. Members of the Black community has been watching with sadness, but no surprise, as they have lived and died by horrors like this on a daily basis since they were brought to this continent, and the white community has been watching with horror and in surprise. 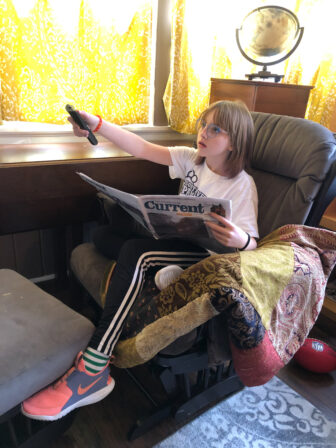 Catching up on the news before a discussion with mom (Photo by K. Martin)

Remote learning for the pandemic has put many children at home. During the storming of the Capitol, TVs and laptops lit up everywhere, with everyone in the room watching the coverage of each minute of new events. The following days have not let up, as we hear reports of the arrests and identifications of those who stormed into the Capitol.

How do we talk to our children about it? What do we let our children watch? How can we control what our children see? School-age children may be getting a version of events from reaction videos their peers have made, which are at times on point and at times completely incorrect. (The fact-checking never stops!)

The National Public Radio podcast Life Kit offered suggestions in the days after the insurrection, such as not letting your children watch the news without you. One guest remembered her mother forbidding her from listening to the news during the Vietnam War but said the way her house was set up, she couldn’t not hear it.

She remembered hearing the phrase “guerrilla warfare” and thinking gorillas were fighting humans. She worked out a plan to hide in her closet for when the gorillas came for her.

Now that we have podcasts and earbuds, parents can listen to the news in silence. However, I don’t believe blanket censorship is the best course of action.

The day after the storming of the Capitol, the superintendent of the Beacon City School District, Matt Landahl, sent an email to parents, reassuring them that staff was ready to help students process what they saw.

“Knowing that many of our youngest students may not even be aware of the events that took place, we will emphasize safety and community today and always,” he wrote, noting that “images have been widely circulated on social media and television of the Confederate flag and clothing celebrating the Holocaust” that were brandished in the Capitol. “It has always been our practice to not allow these images in school. We want to reassure a sense of safety on that level as well because of how disturbing these images were to us all.”

While social media companies continue to grapple with how to censor disturbing material or messages that incite violence, Twitter’s decision to ban President Trump has opened more debates about the erasure of words and news.

With heightened censorship on the brain (censorship does happen everywhere since the dawn of time; not all words can be published all of the time), I decided to continue to let my children watch what I watch and listen to what they say they saw or heard.

I heard them processing quickly and healthily but with some humps. Our conversations have covered a lot of ground, and two misconceptions arose:

On a video about the event made by a young person, my child read a comment from a guy who stated that the president had “donated” a single, very large payment to the construction industry, and that was why that industry likes him.

During another feedback session, my child was reading a book for class that involves a family in South America who had slaves. As my child was recapping the chapter for me, my child paused on the word slaves and said: “Why don’t we just call them ‘maids’?”

Hearing that, I paused my child to suggest: “That would not be correct, so how about we use ‘stolen people’?” My child agreed and proceeded to describe the events of the chapter.

This week, in my business education work at Tin Shingle, I had a chance to speak with Moraya Seeger DeGeare, a granddaughter of Pete and Toshi Seeger. She is mixed-race, light-skinned and identifies as Black. She told me that while growing up on Mount Beacon, she was home-schooled for several years during elementary school, which allowed her to sit by her grandfather’s side many mornings.

Pete Seeger would read The New York Times to her, as well as passages of his books as he wrote them. Today, Moraya is a marriage and family therapist who specializes in breaking “cycles of disconnection” so seemed like a good source to listen to and take the lead from. After talking regularly with her grandfather about the news, she turned out all right.

I will continue talking to my children — sorry — listening to my children about what they learned that day. I suggested to them that we call it “the daily digest.” My son got grossed out. To him that implied digesting food, and he couldn’t handle it. We’re still working on the name.