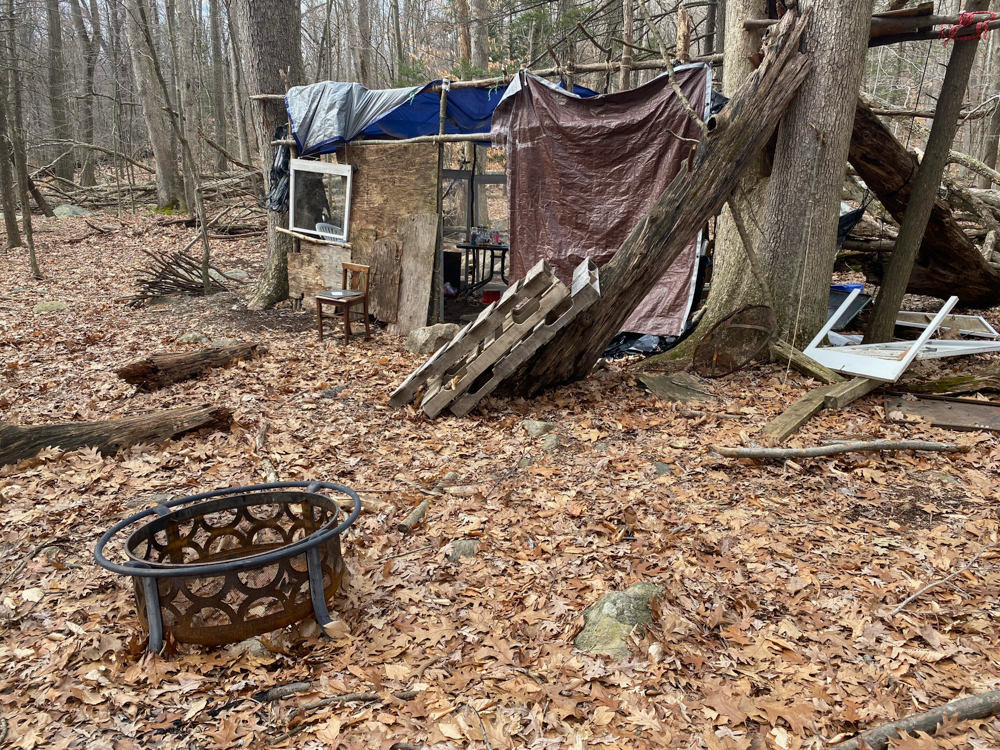 A shanty discovered in the Nelsonville Woods has since been demolished but the debris remains. (Photo by Michael Bowman)

Trustees Pedlosky and Mechaley will not run for new terms

Nelsonville officials this week dismantled a shanty in the village woods and laid plans for a March election that promises to bring two new faces to the Village Board.

At the board’s monthly meeting on Tuesday (Jan. 19), Mayor Mike Bowman said that a resident reported a hideaway in the village-owned Nelsonville Woods that appeared to contain evidence that it was being used for drinking and drug use.

“We went up and checked it and dismantled it,” the mayor said, although “probably a good 10-yard Dumpster’s worth of garbage” remained. “It’s going to take kind of a Herculean effort to pull this stuff out.”

He said whoever built the shanty used a screw gun to assemble it in a small valley amid trees that shield it from view, except in winter. The interior contained chairs and patio furniture, candles, “a case of beer” and other items, the mayor said.

Bowman asked residents to “be on the lookout, if you’re in the woods, for this kind of thing,” and said he plans to confer with the Putnam County Sheriff’s Department, which runs a substation in Nelsonville, “so they can keep an eye out, too.”

The board scheduled elections for March 16 for the trustee seats held by Dove Pedlosky and Lisa Mechaley, neither of whom plans to run for a second term, according to Bowman. They cited various reasons, he said, including the volume of work involved in dealing with issues such as the recent legal fight over an application to build a cell tower. Pedlosky said she also planned to step down for family reasons. Mechaley was not at the meeting to elaborate.

Their departure “is going to be a gigantic loss to the village” and leave “a big hole on the board,” the mayor said.

Any resident who wishes to run for a seat has until Feb. 9 to file an independent nominating petition with at least 15 signatures of registered Nelsonville voters, said Village Clerk Mindy Jesek.

■ The board scheduled a public hearing for Feb. 15 to hear feedback on a proposed law that would regulate short-term rentals such as those booked through Airbnb. Trustee Chris Winward said the provisions under consideration include requirements that rental operators live on the premises, a limit on each rental to 100 days per year and annual health and safety inspections. 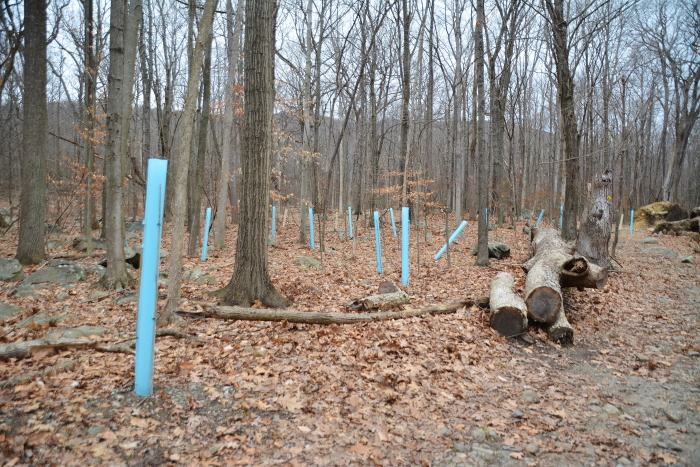 Blue tubes in the Nelsonville Woods (Photo by L.S. Armstrong)

■ The board agreed that volunteers who care for the Nelsonville Woods can replace blue plastic tubes with non-toxic biodegradable mesh tubes to protect seedlings from deer. Bowman noted that the blue tubes often “are all over the forest when a big storm comes through.” The mayor also proposed that a section of the woods be protected and turned into a natural nursery for cultivating seedlings and saplings.

■ Jeff Domanski, director of the Community Choice Aggregation program, reported that everything appears to be on track for Nelsonville to join Philipstown, Beacon, Cold Spring and seven other Mid-Hudson municipalities this summer in the CCA. The program allows homeowners to obtain electric power from renewable energy sources, at competitive prices, through cooperation with Central Hudson.

2 thoughts on “Nelsonville Tears Down Shanty in Woods, Plans for March Election”