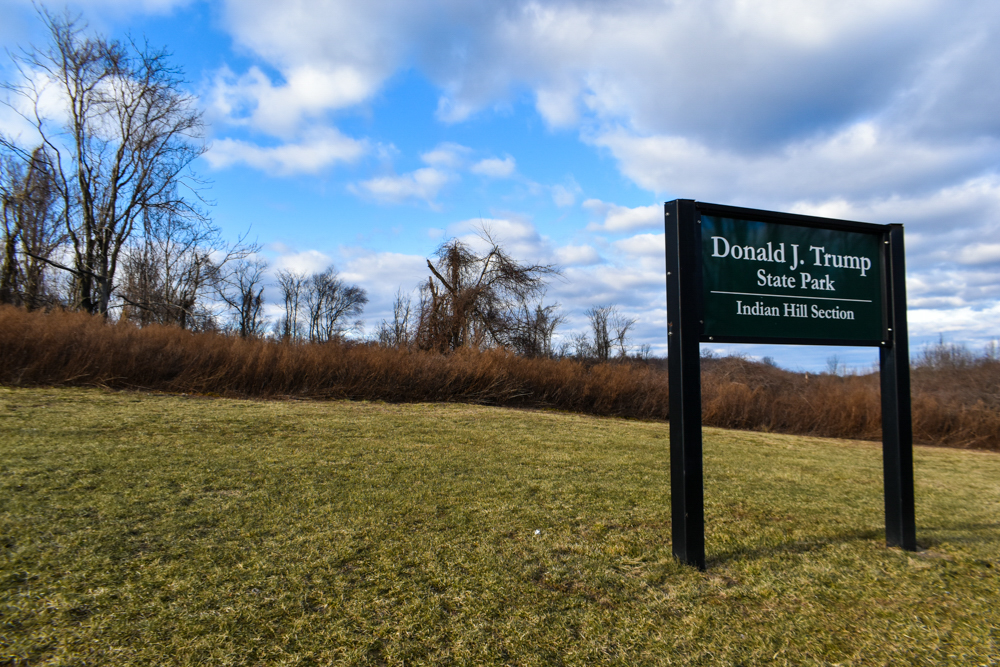 Donald J. Trump isn’t out of the woods yet.

With a looming impeachment trial in the U.S. Senate and ongoing investigations by the New York attorney general, the former president also may soon find his name removed from a local state park.

The Donald J. Trump State Park consists of the 282-acre Indian Hill section that straddles the Putnam-Westchester county line in Jefferson Valley and the 154-acre French Hill section in Yorktown Heights. They are 7 miles apart.

Assemblywoman Sandy Galef, a Democrat whose district includes Philipstown, noted that separation in a letter dated Jan. 15 addressed to the state parks department, calling for both parks to be renamed. “Like his park,” she wrote, “Mr. Trump seeks to divide.”

Galef contends that in light of Trump’s second impeachment and his efforts to overturn the election, residents no longer feel comfortable visiting parks named for him. “His name will discourage the public from enjoying all our state has to offer,” Galef wrote. “This is part of our democratic renewal.”

She asked that the parks be renamed for George Pataki, a Garrison resident and former Peekskill mayor who was the Republican governor of New York from 1995 to 2006 and is known for championing conservation. 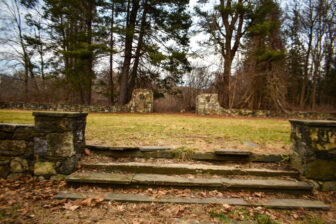 The ruins of a 1920s estate in the French Hill section (Photos by B. Cronin)

Galef, who has served in the Legislature since 1993, is not the first (or second, or third) lawmaker to call for the Trump parks to be renamed. But she is the first to do so with possible legal — as opposed to only moral — justifications.

In an interview, Galef said that the deed to the Indian Hill property was never signed by a representative of the state, and a check by The Current of the deed on file at the Westchester County Clerk’s office confirmed this. (The deed for the French Hill property was signed by a county attorney.) As a result, she argues, the state would be within its rights to change the name.

Galef’s campaign is only the latest chapter in a saga that, like their bombastic namesake, has been filled with broken promises, exaggerations, petty feuds, unpaid bills and paperwork of questionable legal provenance.

Trump bought the Indian Hill parcel in 1998 and the French Hill section in 2000. He spent about $2.75 million and planned to turn the lots into golf courses. Indian Hill was named for the Mohegans who lived there in the 18th century after being forced out of every other part of what is now Westchester County (a Native American burial ground has been discovered just south of the park). French Hill is so named because French troops who fought for America in the Revolutionary War camped in the vicinity.

Trump soon discovered why the 436 acres was such a bargain: They contain marshlands that drain into nearby reservoirs that provide drinking water. That made it impossible to get the necessary environmental approvals to create golf courses, although Trump pressured then-Yorktown Supervisor Linda Cooper to grant them anyway. Cooper told the Journal News in 2002 that Trump acted “like the bully on the playground,” who “just didn’t want to go through the rules.”

Since Twitter had yet to be invented, Trump had to settle for berating Cooper in a letter: “You have done a terrible disservice to your constituents who have sadly lost out on a tremendous opportunity.” He threatened to sell the land to housing developers.

Today, Cooper is the director of the Taconic Region for the state parks department, which includes the Highlands and Westchester and puts the two Trump parks in her jurisdiction. (She declined to be interviewed for this column.)

In 2006, Trump abruptly decided to donate the land to the state as parks, with the condition that they be named for him. The state agreed — an unusual move since the parks department does not typically name parks for living people. Trump took a $26.1 million tax write-off on the land, according to a list of charitable contributions published by The Washington Post.

It was a miraculous increase in value for land that had not been improved in any way. Tim Miller, an environmental consultant with offices in Cold Spring who worked with Trump on three projects that included the land that became the two parks (and who said he had to settle for a $95,000 golf course “credit” instead of $140,000 Trump owed him in fees), noted that without any approvals, the parcels were worth about what Trump paid for them. “There is no legal or economic foundation” for a $26 million appraisal, Miller said on Thursday. 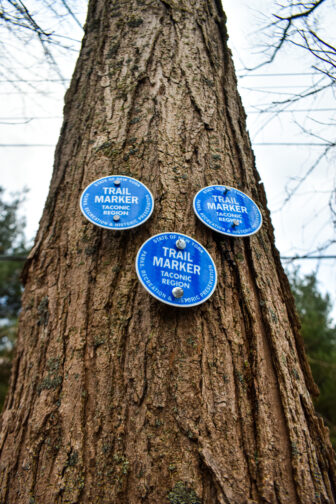 Although Trump said at the time that he hoped “these 436 acres of property will turn into one of the most beautiful parks anywhere in the world,” his generosity stopped short of providing for the maintenance or development of the brambled marshlands. They have sat neglected for years. Although signs touting the parks appear on the Taconic State Parkway, there are no signs directing visitors to an entrance, and signs on local streets keep disappearing. The parks also are not listed anywhere on the state parks website.

The parks are maintained by the volunteer group that on its website sometimes refers to itself as The Friends of Franklin D. Roosevelt and Donald J. Trump State Parks. The site lists how and where to visit the Trump parks and notes that “birding opportunities abound for birders who are intrepid enough to venture into the expanse of invasive plants.” However, a representative of the group, who asked not to be identified, said it has actually not been involved in any maintenance in either Trump park for lack of “bandwidth.”

The state parks department has showed some recent attention to the properties. In 2018, it began a $385,000 capital improvement project that involved the demolition and removal of a few abandoned, asbestos-ridden structures and adding new parking lots, new wooden fencing and two new blazed trails at French Hill. The parks department declined to comment on whether more improvements are in the works.

Having spent last weekend exploring both parks, I can report that they are not without their discreet charms. Indian Hill has a lovely field with ample views, perfect for kite-flying or, judging by the fresh, circular tracks, ripping doughnuts in an ATV. The ATV trails that run through the brambles are thick with multiflora rose and bittersweet that, while being invasive species, probably make the paths quite beautiful when they bloom in the spring and summer. 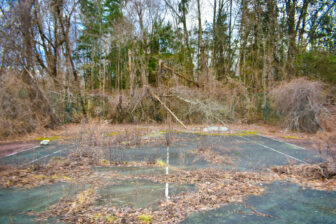 French Hill includes the elegant stone ruins of a 1920s estate and a tennis court that is in the process of being aggressively reclaimed by nature. The newly blazed trails are short, marshy hikes that are perfect for small children who enjoy getting their feet wet, and the tennis court would make an ideal photoshoot backdrop for a black metal band or goth teenagers getting ready to have a terrible time at their prom.

Despite such riches, and despite the public’s hunger for “less-traveled trails” that can be safely visited during the pandemic, I did not encounter another person at either location. Although Trump hoped the pair would become “one of the most beautiful parks anywhere in the world,” they are not even the most beautiful parks on the block, as the Danner Family Preserve is around the corner from Indian Hill. For what it’s worth, the Danners were inspired by Trump to donate their land, as well.

If Galef does not succeed with the latest effort to rename the Trump parks, perhaps critics could campaign to simply call them what they are. The Donald J. Trump State Parks are clearly not living up to their potential, but the Donald J. Trump Invasive Species Refuges would already be a bigly success.

The Campaign for Change

In December 2015 — six months after Donald Trump announced his campaign for president — then-state Sen. Daniel Squadron, a Democrat from Brooklyn, introduced the Anything but Trump Act to have the park renamed. It stalled in committee but has been reintroduced in every session since, including the current one, by Brad Hoylman, a Manhattan Democrat, and in the Assembly by Nily Rozic, a Democrat from Long Island.

The bills do not suggest who would be honored besides Trump, but Squadron said the communities near the parks should choose the names. Rozic suggested Heather Heyer, a young woman who was killed by a white supremacist in 2017 during protests in Charlottesville, Virginia.

Rep. Sean Patrick Maloney, whose House district includes the Highlands, suggested in 2015 they be renamed for folk legend Pete Seeger, a longtime Beacon resident, while Assemblyman Charles Lavine, a Democrat from Long Island, suggested Peter Salem, an African American who fought for the colonies in the Revolutionary War and who, some historians believe, was Muslim.

9 thoughts on “Out There: A Park by Any Other Name”