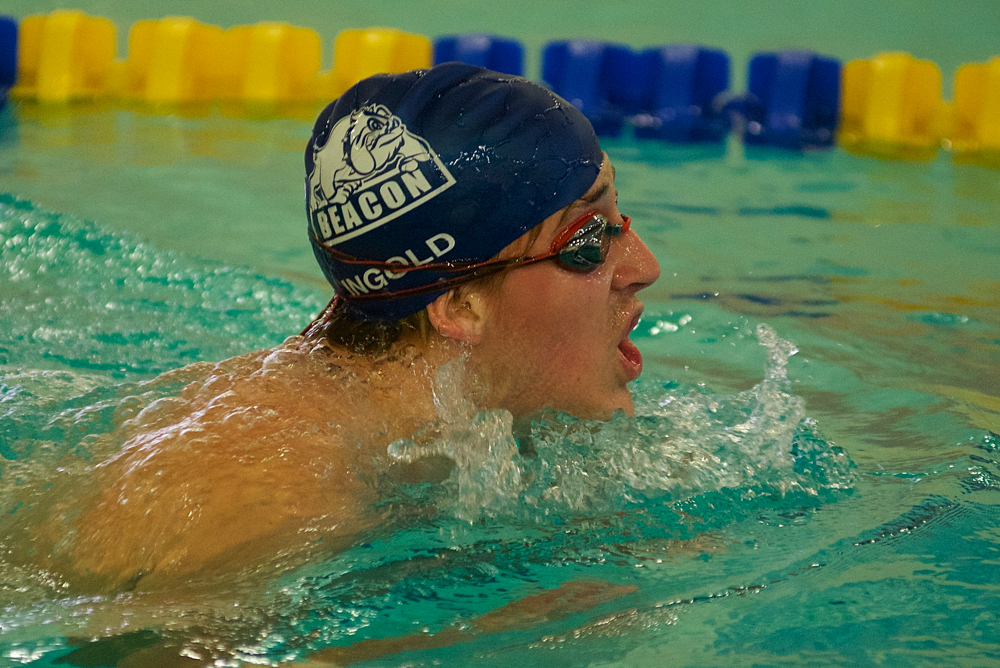 unior Hunter Ingold works out at the Beacon pool this week. The Bulldogs opened their season Tuesday. (Photo by S. Pearlman)

Boys’ team thrilled to be in the water

The Beacon High School boys’ swim team is one of the lucky few squads — so far — to be able to compete this winter, opening its season this week with a loss to Arlington.

Coach Larry Collins has a diverse team — including three All-Leaguers and a pair of newcomers — and said his swimmers are relieved to be in the water with competitions scheduled.

“They’re very happy to be able to have a season,” Collins said. “Even when I’m yelling at them, I think they’re happy to be here.”

Added to the challenges presented by the pandemic will be the test of moving into a more competitive division.

“This season, because we have moved to a new division (with Arlington, Wappingers, Suffern, Pelham, Mamaroneck and Ossining), and because we lost a lot of talent from last year, if we can finish .500 I’d be very happy,” Collins said. “It will be much more challenging for the team.”

“With James and Justin, I’m looking for great leadership, and to be very competitive,” Collins said of his captains. “James is trying to qualify for sectionals, maybe in the 100 [meter] backstroke, and to do well in the 50 [meter] freestyle as well. And I’m looking forward to Justin being able to come back this year. He missed part of last year because of an injury, so he’s trying to finish the things he started.

“Lucas is returning as our freestyle specialist in the 200 and 500 meters,” the coach continued. “He’s looking to set some personal records this year, to get below 2 minutes in the 200. And Hunter, a returning junior, I’m hoping he can do well in all four strokes.”

Collins likes the way Mercer has taken to the sport. “This is the first time he’s swum, and he’s sort of like a natural to the water,” he said. “So I’m hoping he develops into a great swimmer over the next couple of years.” 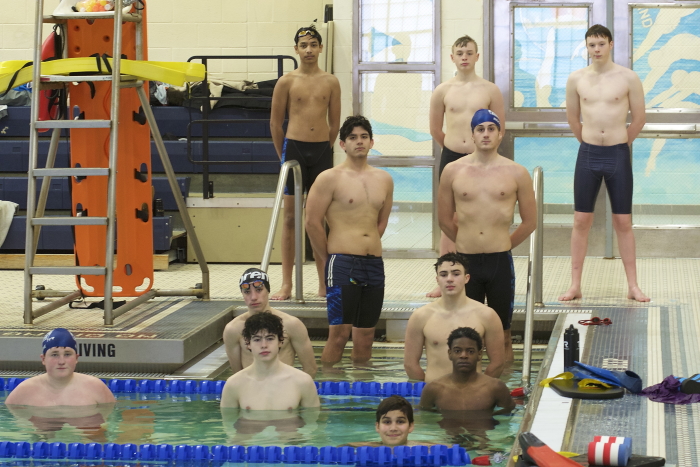 Members of the Beacon boys’ swim team at a recent practice (Photo by S. Pearlman)

Collins is looking for his team to gain experience, compete strong and have fun this winter, and his swimmers are appreciative of the opportunity they have.

The team has had no issue with COVID-19 protocols so far. “Our sport should be fine,” Collins said. “I’ve been coaching since June with my club program, and we have not had any incidents related to the virus.”

Beacon is hoping to swim six meets — two in person and four virtual (with times fed into a computer to determine results). “It isn’t exactly ideal,” Collins said. “I don’t like it, but I don’t think it will be that big of a deal.”

The Bulldogs struggled to score points in their first meet, a 111-49 loss to Arlington on Tuesday at home.

“It was kind of rough,” Collins said. “We are a much smaller team. Some of our swimmers are still developing and some are seasoned veterans. Justin swam a personal best in the 100-meter freestyle, which was a very nice job by him. And Hunter did a nice job for us in the 50-meter free.”

Beacon is scheduled to swim a virtual meet against Ossining and Mamaroneck today (Jan. 22) and host Wappingers on Tuesday (Jan. 26).