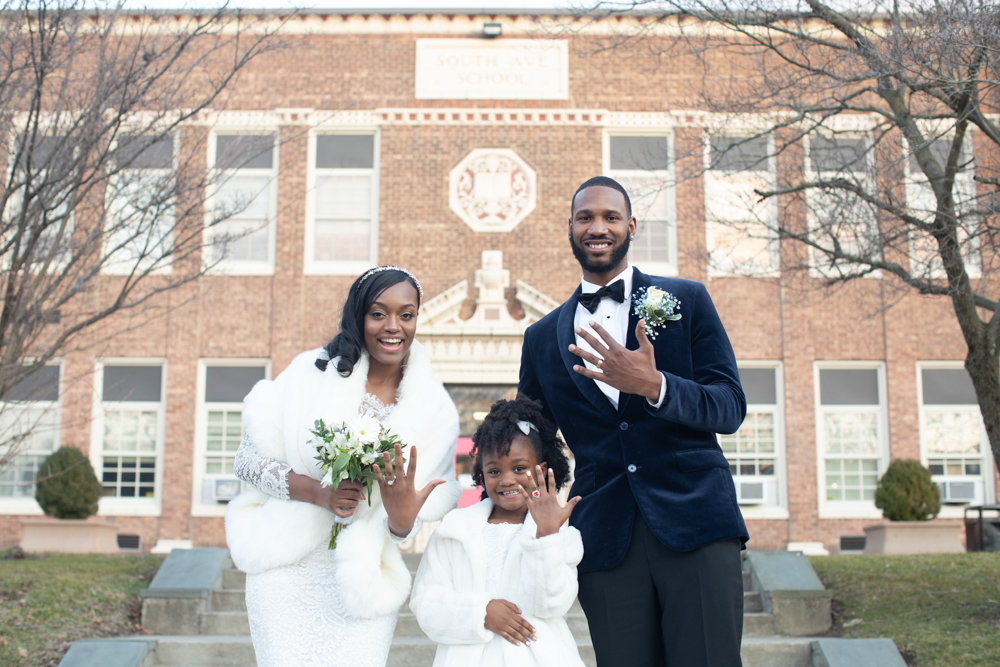 Tiana Wilkins and Corey Ellis with their daughter, Kaylynn, outside South Avenue school in Beacon, where they met in the second grade (Photo by Meredith Heuer)

They met in second grade, and married on Monday

Corey Ellis and Tiana Wilkins both remember, as 7-year-olds, an exchange they had in a second-grade classroom at South Avenue Elementary in Beacon.

“You said something to me, and I said, ‘What are you looking at?’ ” Corey says.

“I was looking at you because I thought you were super-funny and super-cute,” Tiana recalls, “but then you embarrassed me!”

That was the spark of a romance that has spanned more than two decades and culminated in a Martin Luther King Jr. Day wedding.

The couple had hoped to be married at the school where they met, and where their daughter, Kaylynn, 6, is now a student. But the pandemic complicated getting permission to use the school, and with temperatures falling, they decided the ceremony should be held inside.

At the last minute, Tiana’s brother, Andre Rainey, who is the mayor of Peekskill, arranged for the couple to use City Hall for a socially distanced ceremony with about a dozen guests. There was also a livestream for friends and colleagues — Tiana works for the U.S. Department of Veteran’s Affairs and Ellis is a dean at a Bronx high school. 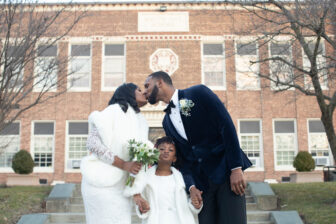 The friendship that began in Mrs. Lassiter’s classroom continued through the fifth grade, when Tiana’s family moved to White Plains.

She didn’t forget Corey, however. Twelve years later, when she was 19 and living in Ossining, she found him on Facebook on a whim and wrote him a message. “He was probably my biggest childhood crush, so when milestones came around — sweet 16s, prom, etc. — I kept thinking of him and wondered if he still lived in Beacon,” Tiana says. When she saw a photo online of Corey at age 19, she was pleased. “He just looked like a handsome, older version of what he used to.”

Corey didn’t respond to her message for two months. (“I was barely on Facebook,” he volunteers sheepishly.) Once he read Tiana’s message, he said his first thought was, “Oh my God — God sent me my wife.”

They met soon after and spent every weekend together for a year. Tiana said her second first impression (or first second impression) was, “He was still silly.” And his was, “She was still shy and quiet and, you know, beautiful.” 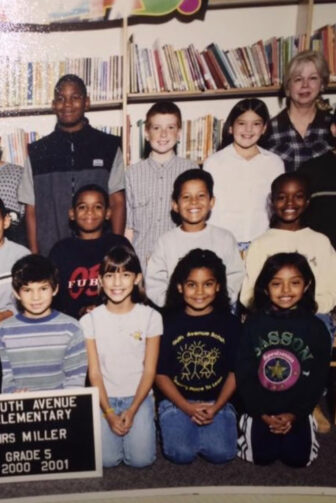 The romance blossomed. “I felt it would be forever,” Corey recalls. Tiana adds, “I thought so, too, but we were young and not ready for forever.”

“We had a long road,” Corey says. They had Kaylynn but then split. Each moved on to other relationships, “which was not what I expected,” he says.

They continued to co-parent, and eventually both relationships ended. On Valentine’s Day last year, the couple went on a date for the first time in 10 years. They say they both quickly realized they wanted to be together, and Corey even took Tiana ring shopping.

The pandemic shutdown that followed weeks later “was a blessing for us, being quarantined,” Corey says. Tiana agrees. “It was a silver lining, because it gave us ample time to get to know each other again.”

On a trip to Los Angeles, Corey proposed in Griffith Park, overlooking the city, after convincing Tiana they were going to take photos for her 30th birthday. “He got me good,” she concedes.

Tiana says they initially planned to wait until 2022 for a wedding, “but when the new year hit, and we knew we want more children, and didn’t want any more out of wedlock, we changed our minds. We thought of significant dates in January and realized Martin Luther King Day was perfect. We put it all together in three weeks.

“My mom and my family are so excited for me, partly because I never stopped talking about Corey,” Tiana says. Corey says his mother, brother and grandmother are also “ecstatic.”

The happiest member of the family is Kaylynn. “She’s running around saying ‘Mommy’s going to have my last name now,’” Tiana says. “She wants a sibling, so she’s super happy.”

One thought on “South Avenue Romance”