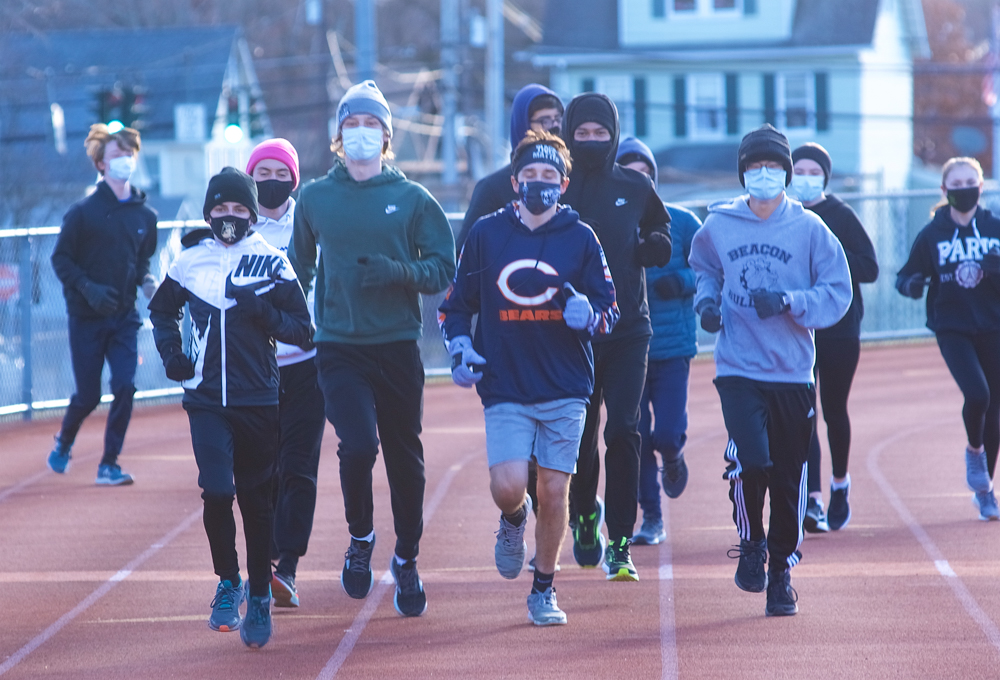 Members of the Beacon High indoor track and field team get in a workout Wednesday at Hammond Field. (Photo by S.Pearlman)

Bulldogs hoping for mild weather, no hitches with outdoor season

Sure, the Beacon High School indoor track and field team is happy to have a season. But that doesn’t mean there won’t be challenges.

The Bulldogs have been practicing outside to get accustomed to the cold weather, in hopes of getting in as many meets as possible.

But colder temperatures and snow or ice — not to mention wind — could all become huge factors at possible outdoor meets in January and February.

Coach Jim Henry said he and other coaches are trying to adapt to fewer events and shorter meets.

“We have no plans for virtual meets — yet,” Henry said this week. “I’m less concerned with the team scoring of meets this season than I am with getting kids opportunities to compete safely. With temperatures hovering around freezing, I’m not interested in having kids outside for the duration of a typical track meet.

“I expect to schedule some teams that are willing to contest a meet consisting of a sprint race, a distance race, a jumping event, a throwing event and perhaps a relay,” the coach said. “Maybe two hours maximum, as opposed to the three-hour usual meet.” 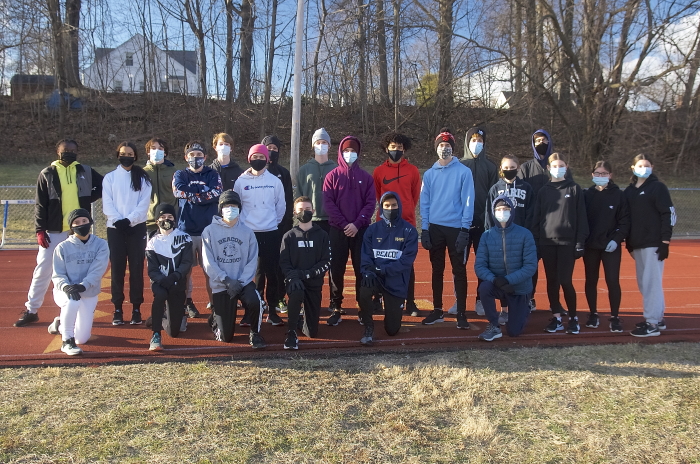 With the New York State Indoor Championships already cancelled, Cader (a state championship qualifier in 2019 and 2020) will be unable to make a return trip to compete at the state level.

Henry said the team’s goals have shifted toward “having a safe and competitive season of some kind; using the indoor season as preparation for the (May/June) outdoor season, when conditions are more amenable to good performance than January; and to post a few times among our junior boys that will assist in building a ‘resume’ that will lead to post-high school track and field opportunities.”

Henry added that he’s impressed with the way Bulldog athletes have handled the difficult situation. “Thus far the kids have been pretty resilient,” he said. “We’re 10 months into this pandemic in New York, and kids have had to sacrifice a lot of opportunities that they may have taken for granted before this year.

“I’ve been impressed with their attention and commitment to practicing and competing safely,” he said. “I hope the adults in our community have appreciated their maturity in handling this unique situation. In some ways, a case could be made that these kids are adapting to things better than many adults have.”

Barring setbacks, Beacon is hoping to open its season Jan. 27 at Hendrick Hudson. Beyond that, the team will schedule week-to-week, and according to the weather, Henry said. The team hopes to face John Jay of East Fishkill, Ketcham and Arlington for dual meets in February, and Henry said Section 1 officials are discussing potential dates with the Hudson Valley Sports Dome in Milton.