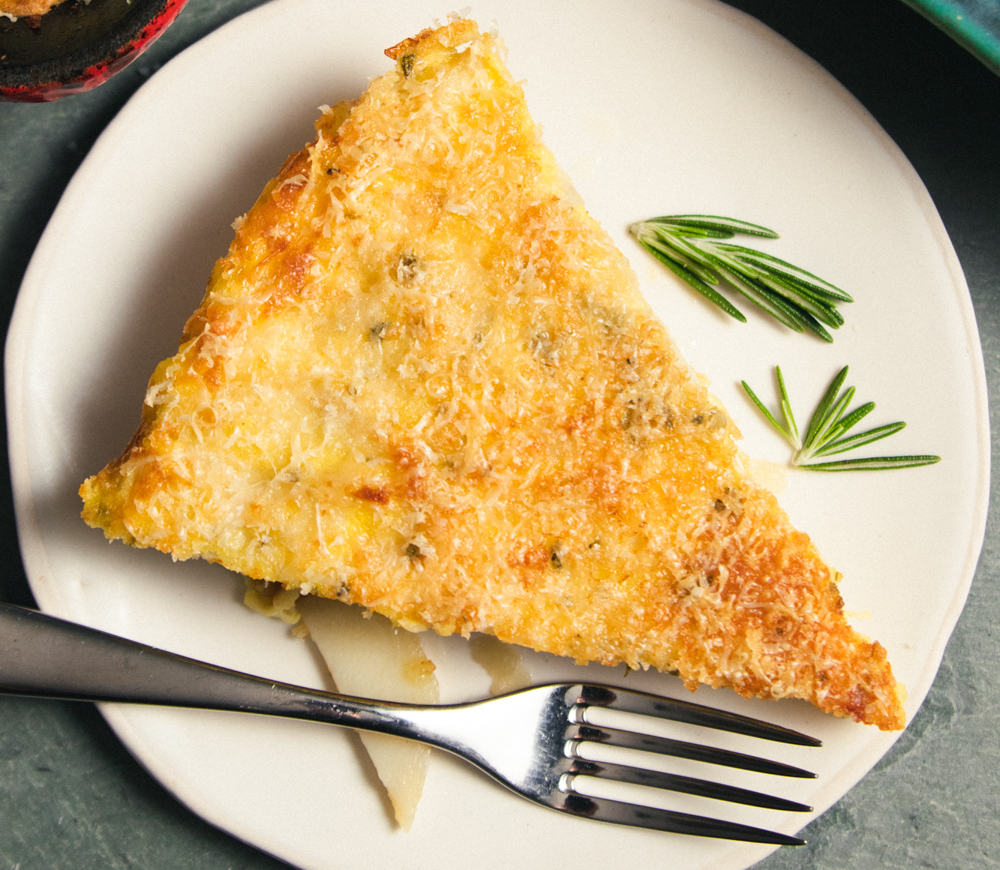 A handful of times in my cooking life I’ve experienced what I’ve come to think of as loaves-and-fishes moments: Moments when there was hardly anything remaining in the cupboard; when someone said, “There’s literally nothing to make for supper.” And yet somehow we sat down an hour or two later not only to sustenance, but to a really wonderful meal.

I suppose I could instead call these my necessity-is-a-mother moments, except that I never felt as if I invented the resulting dishes. They arrived instead like gifts, surprising even me.

This potato cake is a favorite from among them. The first time I made it was on a tiny, 60-year-old gas stove using potatoes and onions that had likewise seen better days. Forgotten, neglected, they were the only foods left in the farmhouse, apart from a few random condiments.

But considering that said farmhouse was situated in a meadow on the edge of the White Mountain National Forest, a half hour from the nearest grocery store, and that the afternoon sunlight just then was incompatible with spending even two minutes in a car, I was determined to make do. A dairy just down the hill sold eggs and cheddar; some herbs grew by the rock wall. Done.

I didn’t realize, as I cooked, that I was recklessly mixing up culinary traditions. My filler ingredients were a nod to the Tortilla Espanola, a dish composed of layered potato and onion slices bound by eggs and often served room temperature, as tapas. (“Tortilla” translates as “little cake,” and, in Spain, the word refers to this dish rather than to the burrito and taco wrappers we know by the same name.) My technique, meanwhile, borrowed from the Italian frittata, which traditionally includes various combinations of sauteed vegetables, meats, herbs and cheese, and is finished under a broiler. As for the cheddar? I confess that idea probably came from a cowboy-style skillet breakfast of hash browns and eggs I’d had as a kid.

Another thing I didn’t realize, as I pottered around the kitchen on that late summer afternoon, was that one of the people I was cooking for hated eggs. Not just a little bit; they made her retch. This was my aunt-in-law Fourgie, one of my favorite people in the whole world, and since childhood, she hadn’t been able to so much as smell an egg without her throat seizing up.

A more sensitive cook might have noticed the growing urgency to her politeness:

“I’d be happy to drive into town,” she offered.

I cooked on, in blissful ignorance. And that night, after dinner — after the wine was drunk, the ice cream (procured from that same nearby dairy) consumed, and the plates cleared — Fourgie confessed her lifelong egg aversion. I was mortified. But, she admitted, this was the first egg-based dish she’d not only tolerated but actually loved. To this day, she still brings it up.

Since then, I’ve done research, consulted recipes and made various iterations of this potato cake at home, more carefully and authentically. But my family and I still prefer this mixed-up version, which borrows a few ideas from one tradition and a few from another, and throws in a dash of the magic that always hides at the bottom of an empty cupboard.

This recipe borrows the Spanish technique of poaching the potatoes and onions in a cup of olive oil, which you then drain off (and can strain, save and re-use). It results in a meltingly wonderful texture. But you can instead sauté the vegetables in less oil, frittata-style; just be sure the potatoes are cooked through and the onions caramelized before adding the egg mixture.

Heat the oven to 375 degrees. Warm the olive oil in a 12-inch cast iron skillet over low heat. Add the garlic cloves and leave them alone to poach gently while you prepare the rest of the ingredients (remove them if they start to turn dark brown).

When the garlic is golden, remove from the oil and set aside. Raise the heat to medium, add the sliced potatoes and onion and sprinkle with salt and pepper. Once the oil starts to shimmer, reduce the heat to the lowest setting and allow the vegetables to poach until soft, about 20 minutes, turning them gently once or twice as needed.

Meanwhile, mash together the rosemary and caramelized garlic. Break the eggs into a large bowl and whisk well, then mix three-quarters of the provolone, the rosemary-garlic paste and salt and pepper into the egg mixture.

When the potatoes and onions are cooked, pour off most of the olive oil. Raise the heat to medium, add the egg-cheese mixture and allow to cook until the edges start to set, 3 to 5 minutes. Transfer to the heated oven and cook until the middle barely wobbles, 12 to 15 minutes. Sprinkle the remaining provolone and Parmesan over the surface and set the pan under a broiler just until the top turns golden and begins to bubble. Serve warm or at room temperature.

*This recipe can be easily adapted to accommodate different proportions of onions and potatoes — aim for between 2 and 2½ pounds combined total — and anywhere from 6 to 10 eggs.