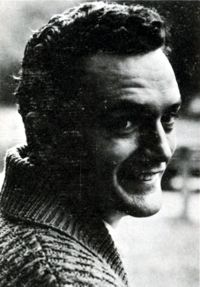 Clifford Theodore (“Ted”) Forlow, 89, a Broadway actor whose son, Mark, lives in Philipstown, died Jan. 18 at his home in Nanuet.

He was born in Independence, Missouri, on April 29, 1931. An Eagle Scout, he graduated from Baker University in Baldwin City, Kansas, and served in the U.S. Navy during the Korean War.

Ted appeared in 14 Broadway shows, notably Man of La Mancha (Martin Beck Theatre 1968, Palace Theatre 1977 and Marquis Theatre 1992) and A Funny Thing Happened On The Way To The Forum (Alvin Theatre 1962). He was accomplished in many areas of stagecraft including production director, choreographer and set and props construction, which he oversaw for many local and regional productions. He also appeared in off-Broadway shows and national and international touring shows.

He is best known for his role as “The Barber” in Man Of La Mancha, for which he received the following notice in The New York Times in September 1977:

The scene where Don Quixote confiscates barber’s basin and uses it for a helmet is probably the finest of all. Ted Forlow gives a quicksilver performance as a cheerfully exuberant man trying to cope with this bearded, vehement apparition, and somehow managing. The “Golden Helmet” song matches the mood completely, and the balance among Mr. Kiley, Mr. Forlow and Tony Martinez’s Sancho Panza create an interlude in which for once the humor, the nobility and the radiance of Cervantes’s masterpiece are transmuted into musical comedy terms without the slightest distortion.

Ted also enjoyed painting, carving and woodworking and could repair almost anything, his family said. He loved the films of W.C. Fields and the radio comedy of Bob & Ray. Throughout his life he practiced morning meditation and had a spiritual practice that brought him closer to God.

Along with Janet, his wife of 63 years, he is survived by children, Mark, Christina, Annette and Denise; five grandchildren; four great-grandchildren; and his brother, Don Forlow (Marilyn).

A memorial celebration will be organized later in the year. Memorial donations may be made to Another Step (anotherstep.org).