I am disgusted by the politicization of the vaccine distributions in Putnam County. A news release issued on Jan. 19 by County Executive MaryEllen Odell regarding a COVID-19 vaccination site at St. Mary’s Episcopal Church in Cold Spring was an embarrassment to herself and the county.

Instead of focusing on the successes of the county Health Department and Drug World of Cold Spring and the challenges ahead, Odell spends four paragraphs fluffing her candidates and political allies, namely Vinny Tamagna, the county transportation manager and former Republican legislator; Kevin McConville, the chair of the Philipstown Republican Committee and aspiring candidate for county sheriff, who “volunteered his expertise”; Republican state Sen. Sue Serino, who “visited to offer her support”; and Republican Legislator Neal Sullivan, who “stopped by.” 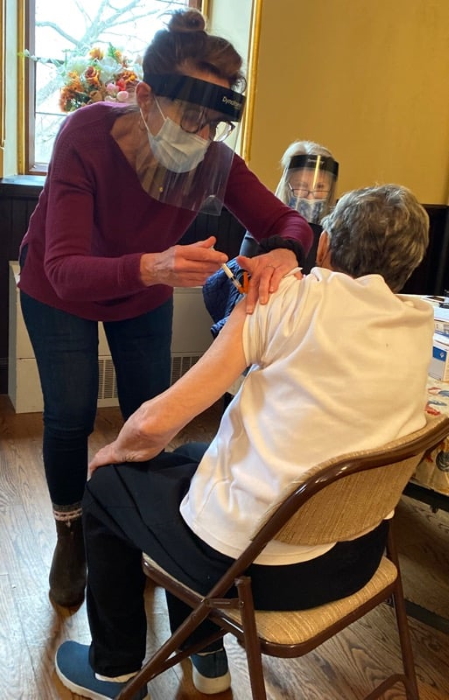 Janice McConville receives the vaccine from Janet Caluari at a clinic at St. Mary’s Church in Cold Spring. Barbara Scuccimarra, a former Putnam County legislator who volunteered at the event, is in the background. (Putnam County photo)

That county Republicans see inoculating people against a killer virus as a candidate and political machine photo-op lays bare the depth of their need for power and control, and their lack of compassion for people suffering.

It is worse than simply politicizing the process. The streaming in of politicos to the clinic endangered the population giving and receiving the doses. It is not as if we are discussing the most careful people in the first place. We all know that the county executive has found reason to remove her mask, indoors, while not socially distancing. Was Sullivan’s temperature taken at the door? It is clear that the health of those working and receiving the inoculation was put behind the self-interest and politicization.

McConville was quoted as saying he was delaying his announcement of a run for sheriff “as a result of the COVID vaccine being distributed tomorrow” because he didn’t “want to interfere in this process.” The idea that the announcement of a twice-failed, third-time candidate would distract anybody from the important information on the local inoculations to defeat a disease that has killed more than 400,000 Americans is laughable. This level of dishonesty is exactly the reason why we must reelect Sheriff Robert Langley. We cannot afford to have local representation that focuses on themselves more than their constituents.

One thought on “Letter: Vaccine Politics”