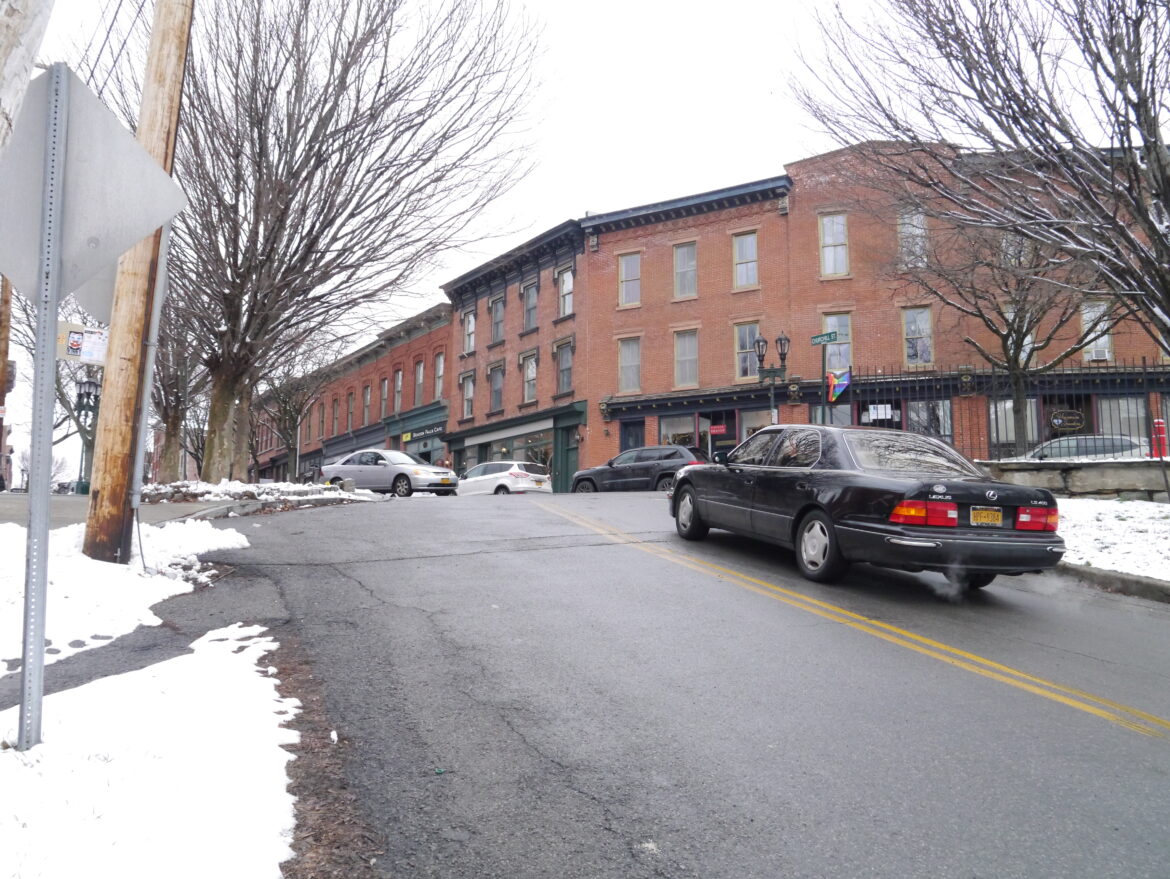 The committee recommended adding more visible crosswalks and improving sidewalks at the steep intersection of Churchill and Main streets. (Photo by J. Simms)

A citizen committee created last year has come up with a series of moves it says can net Beacon at least 170 new parking spaces — more than 70 of them at little or no cost to the city.

Mayor Lee Kyriacou created the Main Street Access Committee in January 2020 in one of his first moves after being sworn into office. Charged with addressing issues related to getting to and from Main Street, the 14-person group has returned a year later with a three-phase plan that involves parking, biking, unsafe intersections and signage.

The first phase of the group’s recommendations — some which are underway — include low-cost, no-new-pavement ideas that can be completed quickly. The concept was introduced to the City Council during a meeting in July and would add at least 71 parking spaces by reconfiguring existing lots, restriping side streets for angled parking and adding street parking along parts of Fishkill Avenue.

The plan would also add uniform “way-finder” signs to indicate public parking and stop signs at side streets that run into Main.

All that work can be done without pouring new asphalt, committee members said during the council’s meeting on Monday (Jan. 25).

“There’s a lot of spaces out there, and with global warming and the heat-island effect in cities, the last thing you want to do is create more surface parking lots that create ‘dead spaces’ in and around Main Street,” explained City Planner John Clarke, who advised the committee.

Stripe spaces on adjacent streets within two blocks of Main.

Add parking signs on Main Street and at municipal lots.

Stripe 22 spaces on east side of Fishkill Avenue.

The committee’s recommendations include narrowing the wide driving lanes on Wolcott Avenue in front of the West End Lofts to add 25 on-street spaces and repurposing an empty lot behind St. Andrew’s Church, which the city acquired last year, for public parking.

The city would collect public input before proceeding on either of those projects, Kyriacou said Wednesday.

The final component of Phase 2 would create biking “boulevards” throughout Beacon with landscaped barriers or other traffic-calming elements to keep biking safe along the routes. The committee suggested potential routes but recommended the city seek grants to hire a consultant to flesh out the plan.

The committee met every two weeks over the past year, said Sara Pasti, one of its co-chairs. The pandemic scuttled plans for public forums, but she said the members were chosen to include business owners and residents with diverse expertise, “and we were charged with talking to our colleagues, so we could bring other peoples’ perspectives to the committee.”

The committee has completed its recommendations for longer-term Phase 3 projects for the council to review in the near future.

Kyriacou said that Beacon could package the recommendations into an application for one of the state’s $10 million Downtown Revitalization Initiative grants. “The county hasn’t won one yet, and I would bet that some good plans on downtown and access and bike lanes would look pretty good,” he said.