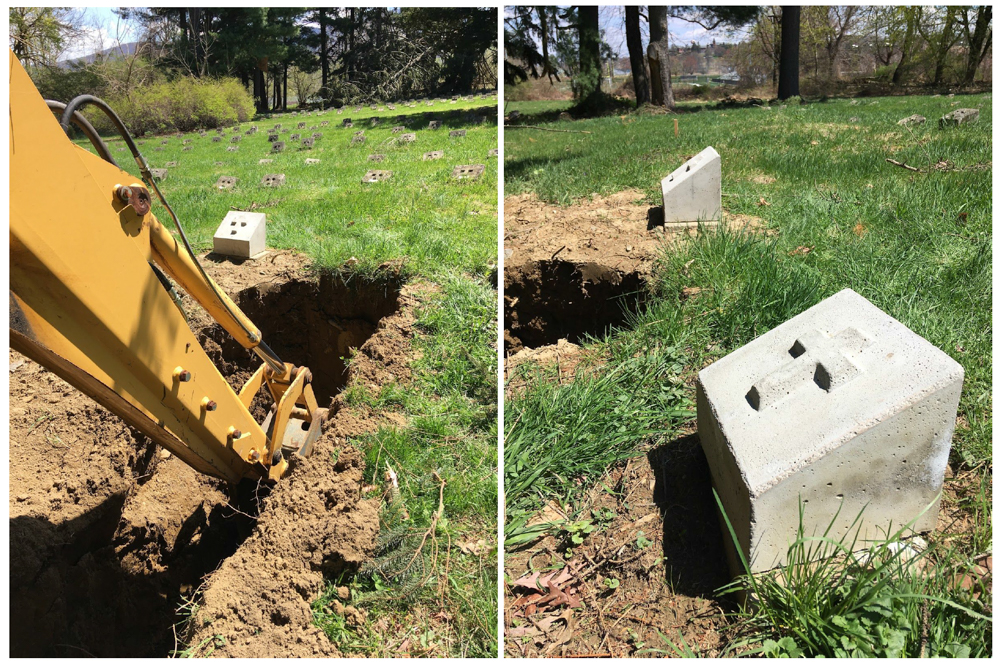 Graves were dug in April at the Fishkill Correctional Facility in Beacon for two inmates who died of COVID-19 at other prisons and whose remains were not claimed. (Beacon Prison Action)

Cases of COVID-19 among inmates in state prisons have tripled and among staff more than doubled since November as the state weighs a plan to vaccinate tens of thousands of prisoners and detainees, including at Fishkill Correctional Facility in Beacon.

New York expanded eligibility for COVID-19 vaccines to prison staff, parole officers and local jail staff on Jan. 11. But a plan to vaccinate prisoners is “something that we’ve been talking about, standing up and operationalizing,” said Melissa DeRosa, secretary to Gov. Andrew Cuomo, during a briefing on Jan. 22.

Residents 65 and older are currently eligible to receive vaccines in New York. The state has about 1,100 prisoners who are 65 or older and about 250 who are 75 or older, said DeRosa.

“We’re trying to figure out the best way to start to deploy resources, obviously, in the context of fairness, given that the demand is so great across the public,” she said.

The rise of COVID-19 infections in New York’s prisons has mirrored the spike statewide, where Dutchess and other counties are facing record-high caseloads after infections dipped in the summer before proliferating again in the fall.

Of 4,883 inmate cases as of Wednesday (Jan. 27), 67 percent have been confirmed since Nov. 4. Another 12 inmates have died since that date, raising the number of prisoner deaths to 30. That includes six at Fishkill Correctional Facility — the most at any state facility — and three at Green Haven Correctional Facility in Stormville. 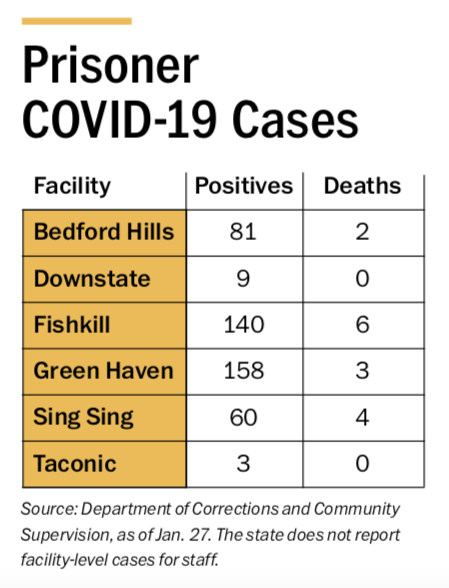 Prison staff have also been hit hard, with 4,236 infections among guards and other employees, with 64 percent confirmed since Nov. 4. Seven prison staff have died of complications of COVID-19.

The state prison agency suspended visits to prisoners as of Dec. 30. Earlier that month it suspended the transfer of prisoners from county jails to state facilities.

Jennifer Scaife, executive director of the Correctional Association of New York, which is authorized to investigate conditions inside state prisons, said the facilities are “congregate-care facilities” whose employees return to their homes and communities after every shift. That is one reason that vaccinating prisoners is an “essential public health measure,” she said.

“Just like any congregate-care facility, people in prison need to be protected and the surrounding communities also benefit,” she said.

As the first vaccines neared federal approval, prisoners were included in Phase 1 of vaccinations in eight states, not including New York. New Jersey began vaccinating prisoners and staff in December, and North Carolina began offering shots to state inmates aged 75 or older last week. Utah on Monday (Jan. 25) vaccinated 79 state inmates who are 70 or older.

Each of the two vaccines approved for use requires that each person receive two shots given weeks apart. Both must be stored in freezers. During a recent call between the state prison agency and prison-reform advocates, there was a discussion about waiting for a vaccine that doesn’t require freezers or two shots, said Scaife.

Some prisoners have sued to be released, citing their risk of becoming infected.

In one case, decided on Jan. 18, a state court ordered the state to vaccinate Edward Mackenzie, a 65-year-old inmate at Adironack Correctional Facility in Essex County. “MacKenzie has a ‘fundamental’ legal right to reasonable and adequate medical care, as well as a clear legal right to receive the vaccine due to his age,” the court ruled.

4 thoughts on “Should Prisoners Get Early Vaccines?”