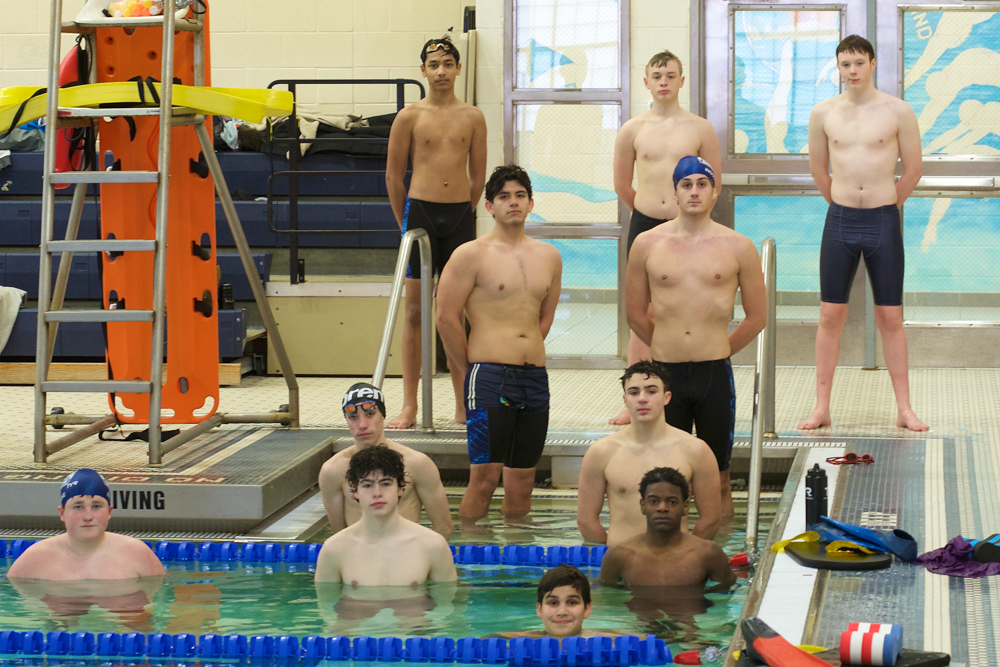 The Beacon boys' swim team, shown here at a practice, finished behind Mamaroneck and Ossining last week in a virtual meet. (Photo by S. Pearlman)

The Beacon High School squad came up on the short end of a virtual “meet” with Mamaroneck and Ossining on Jan. 22 — in which teams swim at their home pools and enter their times online.

In addition, Piciacchio took second place in the 100- and 200-meter freestyle races, and Vermeulen was second in the 200-meter individual medley and the 100-meter fly.

“The team was motivated to improve on their first meet,” a loss to Arlington on Jan. 19, said Coach Larry Collins. “We had several personal bests. The team has been coming along well.”

Beacon was scheduled to swim on Thursday (Jan. 28) against Wappingers, and to host Pelham on Monday (Feb. 1).

The Beacon girls’ and boys’ bowling teams each closed the week with 2-3 records.

In their most recent matches, on Wednesday (Jan. 27) against Arlington at Fishkill Bowl, the boys won, 5-2, and the girls swept, 7-0. Sophomore Gabby Foret rolled a 133 for the girls and junior Maura Lane had the high series.

“Both girls are figuring out how to connect on spares,” said Coach Brian Mahon.

Cadence Heeter has also shown improvement, he said. “Both Gabby and Cadence are figuring out things, like where to stand, where to put the ball, using the arrows,” he said. “They’re picking up quickly” despite being new to the team.

For the boys, junior Dan Gilleo, an All-League selection last season, had the high series. Will Hockler also had a good afternoon, Mahon said.

The boys picked up an earlier victory over Arlington, and the girls defeated Ketcham but dropped matches to Carmel, Mahopac and Arlington. The boys have had close games against Carmel and “are just a few pins from being 3-2, rather than 2-3,” Mahon said.

Both teams are scheduled to face John Jay on Monday (Feb. 1) at Fishkill Bowl.