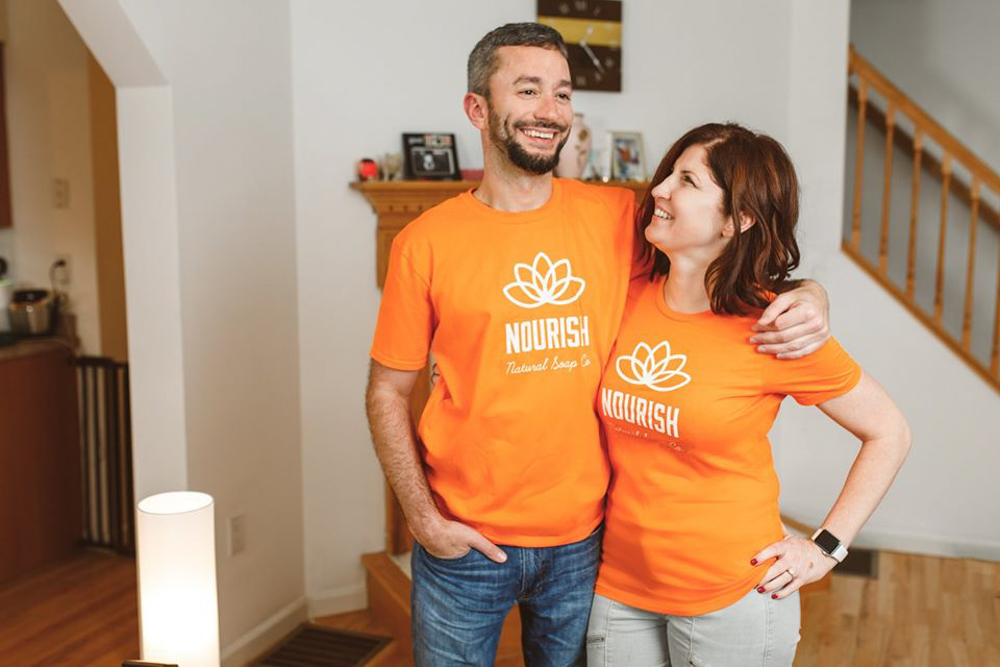 The Nourish Natural Soap Co., which until Jan. 29 only existed online, now has a storefront at 263 Main St. in Beacon where its products can be seen, and smelled, firsthand.

Sage Papanicolaou, who owns the shop with her husband, John, said she knew little about soap for most of her life. But she did know that taking a steam-filled shower or bath soothed her mentally and physically, and that soothing was nearly always in short supply. Sales have been brisk during the pandemic.

Three years ago, Sage and John — who were married last summer — “had a lot of stressful things going on,” she recalls. “I started looking for a hobby for all my nervous energy. We love soap, but we couldn’t find anything that wasn’t overly sticky, and not much in the scents we liked. I found a book about weighing out the oils, and that led to me starting to try recipes and blending in ingredients which added benefits while also having memorable and sometimes exotic scents.” 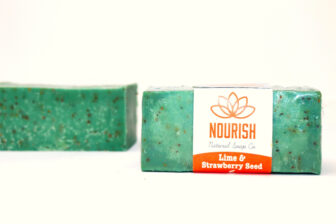 Some customers call this soap the “crown of thorns” – tough but effective, the couple says.

Sage had to develop a few skills for soapmaking. “I’m not super-crafty and I’m a bad baker,” she says. Still, she found production to be “cathartic and creative.” John became intrigued with exfoliants and creating scents.

“Most of our soaps have olive, coconut or palm oil as a base,” Sage says. “The lye and the oil are clear when they come together and take on a pudding-like consistency. At that point, we add the formulation of combinations. For example, we might combine lime, essential oils and strawberry seeds.”

Their online store has about 15 soaps and scrubs, along with hand sanitizers, bath bombs and shower steamers, which John calls his favorite product. “The essential oils mix with the steam, which opens up the airways,” he says. “Sage always knows when I’m using one, because my showers take 20 minutes longer.” 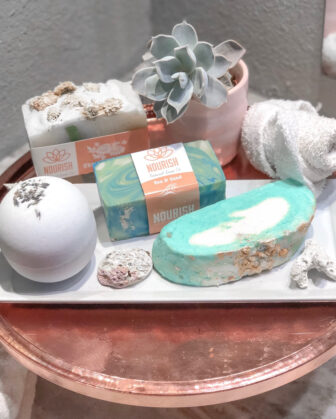 Unusual ingredients are a hallmark of Nourish soap products.

After their initial experiments with making soap in 2017, the couple began giving their homemade products to friends and family. “People loved it and gave it to other people, so I made a website in a day” to process orders, Sage recalls. (It helped that she has a marketing background; John works in finance.) “Introducing a lot of people to natural soaps was an eye-opening experience. All they had been exposed to were commercial products like Dove.”

Soon strangers began placing orders. “I always envisioned it would be my fulltime job,” Sage says. “It began at night and weekends, a side job, but at some point it got big enough to support itself.”

The storefront was “as unplanned as unplanned can be,” Sage says. They spotted a sign in the window, and the rent fit their budget. “The great thing about having the shop is that it will enable us to have dialogues [with customers] and not just provide instant answers.”

Initially, the couple made all the soap at their home, which was then in New Jersey. But during a visit to a friend in Beacon, John realized it might be the better place for them, and they made the move 18 months ago. They plan to move production to the store while allowing customers to watch the process through a glass partition.