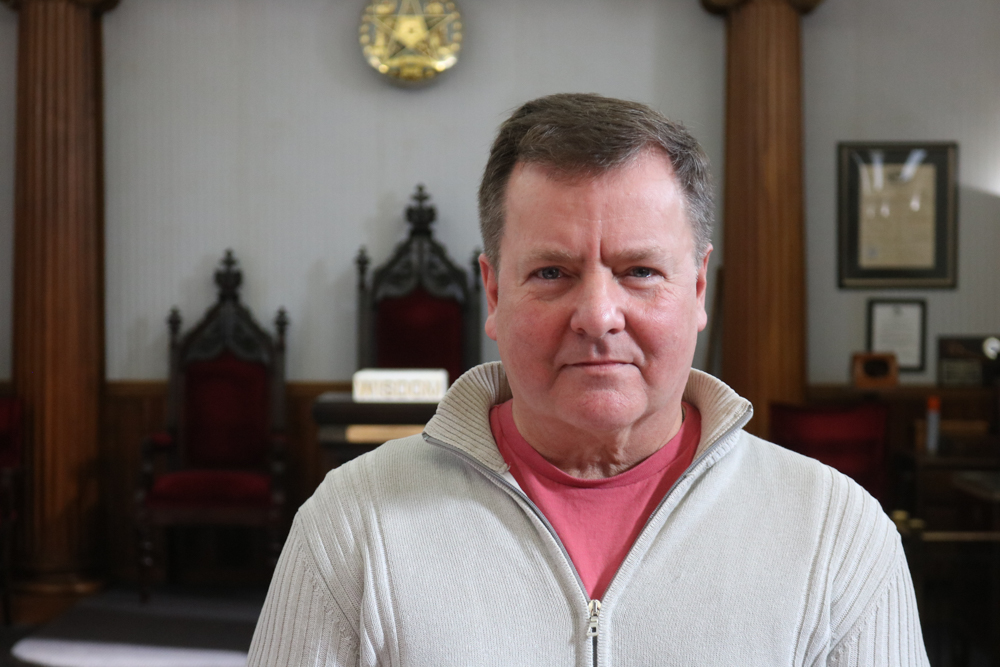 Dan Needham at the Masonic Lodge in Nelsonville (Photos by M. Turton)

Despite being chartered in 1851, the Masonic Lodge 236, just a block off Main Street in Nelsonville, may be the least understood organization in Putnam County.

Cold Spring resident Dan Needham, the “master,” or head, of the lodge, wants to change that.

“When I became master in 2019, it was upsetting to realize some people didn’t even know there was a lodge in Philipstown,” he said. “We need to be more visible; our mission is to make people’s lives better here.”

Needham’s own experience with the Masons led him to join Lodge 236.

His daughter suffered from hip dysplasia, but when he left the U.S. Air Force, he no longer had medical benefits to cover the high cost of treatment.

“A Mason said he could help,” Needham recalled. “My daughter was able to continue treatment at the Shriner’s Hospital in Springfield, Massachusetts, at no cost to me.”

The Shriners, an extension of the Masons, operate 22 nonprofit children’s hospitals across the country, offering free medical treatment to the uninsured.

“I joined the Masons seven years ago,” Needham said. “I wanted to give something back.”

Needham wants to increase awareness of the Masons’ work, although historically, the organization has kept very much to itself, causing many to view it as a secret society.

“We’re not a secret organization,” Needham said, “but we are an organization with secrets.” 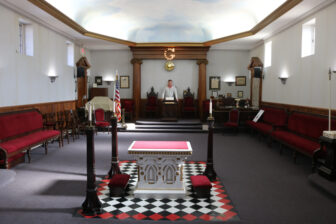 Needham inside the Masonic lodge

Those “secrets” center on historic rituals, some of which are said to date to the building of King Solomon’s Temple in 957 B.C.

“We keep these rituals close to our vest,” Needham said, though he said most, including the “secret” handshake, can now be found on YouTube.

Founded in England in 1717, the Masons, or Freemasons, are the oldest fraternal organization in the world, beginning as a guild of master stonecutters.

Lodge 236 has quietly contributed financially to a number of local organizations, Needham said, including the Philipstown Garden Club, the Constitution Marsh Audubon Center and Sanctuary and the Nelsonville Fish and Fur Club’s annual children’s fishing derby.

“We’ve also helped out local people facing hardship,” Needham said. “When a Mason knows of someone who is going through financial difficulties, we have a fund that can assist them.”

The Philipstown Food Pantry declined a donation from the Masons and instead asked for help transporting food from the regional bank. So each Friday, three or four Masons bring loads from Cornwall to Cold Spring.

The lodge doesn’t fundraise. Instead, each member pays dues and contributes to projects and to a fund that supports other chapters. The lodge also rents out two apartments above the lodge. 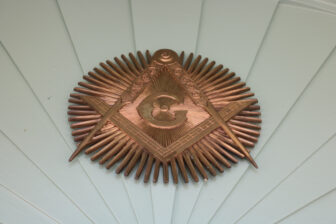 To become a Mason, a candidate must be approved by the membership. (For information, email Needham at [email protected]) A background check includes a visit to the candidate’s home to ensure the family is supportive of him becoming a Mason.

New members work up through apprentice and fellowcraft levels that involve symbolic induction rituals. Before becoming an apprentice, a candidate goes through an initiation while blindfolded.

“Symbolically they are in a state of darkness” Needham explained. “Masonry is about moving from darkness to light, symbolic of enlightenment, becoming a better man, being aware of what you can do to become a better person. We take good men and make them better men.”

The final stage is “the third degree,” or master, which comes from the Mason ritual of quizzing a fellowcraft member on Mason history. It can take up to 18 months for an apprentice to advance to the third degree, Needham said.

The Nelsonville lodge has just over 50 third-degree members, most of whom live within 20 miles of the lodge, although members are not required to reside in Philipstown.

Needham’s desire to improve public awareness of the Masons may be due to the organization’s dwindling numbers. In the 1960s, there were more than 4 million Masons in the U.S., but that has since fallen by half. “People are not as commitment-oriented,” Needham said. “Volunteerism has fallen off.”

In Philipstown, he said, that is compounded by so many residents commuting to New York City, although he said the lodge welcomed two new members last week.

Because Masons pledge to keep their rituals to themselves, misconceptions about the organization abound. Masonry is not a religion, although applicants are required to acknowledge a higher power or creator, and an altar features prominently in many rituals.

Race, religion and politics have no bearing on who can become a Mason, Needham said, and the discussion of politics and religion is not permitted at meetings.

Membership is limited to men, although some lodges have begun to admit women. There is also an organization for women within Masonry, called the Order of the Eastern Star, although there is no longer a local chapter.

Movies such as National Treasure and bestsellers such as Dan Brown’s The DaVinci Code have drawn attention to the Masons, Needham noted, which may have been beneficial to the organization. “People like things that have a bit of secrecy to them,” he said.

Masons are not supposed to divulge the names of their colleagues, past or present. However, among a large collection of artifacts at Lodge 236 is a thick book containing the signature of every Philipstown member since 1851.

2 thoughts on “Demystifying the Masons”