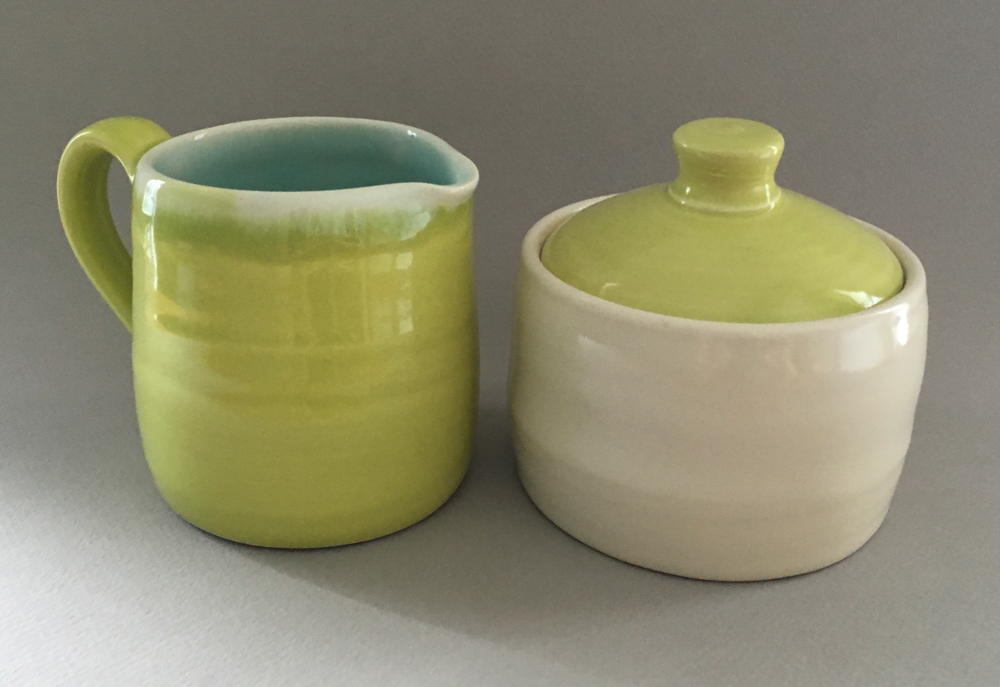 When she first became a potter, Virginia Piazza recalls, “there were a lot more of what I’d describe as ‘drippy blue glazes.’ Now, there’s more subtlety; I see a lot of young potters using gray and white and neutral palettes. There’s also a lot of narrative, in terms of pottery with illustration on it — maybe that’s due to graphic novels.

“When I was learning you didn’t see that at all, but you do see that in museums, with pieces from antiquity, so maybe things go in circle,” says the Beacon resident, whose tableware and vases grace many a Hudson Valley table. “I’ve done some carving, dots, dashes; every now and then I think about doing more, but mainly geometric brushwork. I draw well and I guess I should use that skill, but aside from flower forms, leaves, I keep things simple.

“Every potter has their own touch, partly intentional. My work isn’t super-heavy nor super-slim. It’s meant to live a life. I want people to touch my pottery.” 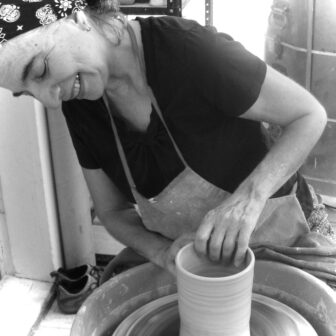 Virginia Piazza, at the wheel (Photo by Gary Larson)

Piazza is a graduate of the Kansas City Art Institute, where she earned a bachelor of fine arts. “I chose the school partly because it was focused on form and function,” she recalls. “That was kind of rare. Usually in our culture usable objects become less valued, unlike in places like Japan.”

The Brooklyn native didn’t start out as an artist. She studied liberal arts, editing books, and worked in retail. But she decided to make a change and “pursue something I was passionate about.” She had taken drawing and printmaking classes but found herself beguiled by clay during classes at Greenwich House Pottery in New York City.

“Clay has a kind of magical aspect to it,” she explains. “Some people struggle with it, but come back, trying, failing, finally succeeding.”

Piazza described her initial efforts as “rustic, in brown and dark colors. I explored raku and wood firing, which my art school encouraged. Then I saw the work of modernist artists: Eva Zeisel and Russel Wright,” whose workshop and home is preserved at Manitoga in Garrison.

After graduating in Kansas City, Piazza returned to New York City, working in a few places as a studio helper. She landed a job as the resident artist at the Clay Arts Center in Port Chester and trained people to mix glazes. She also was given a small studio at the center and began selling her work.

Piazza later spent 15 years at the Craft Students League, in Manhattan, which has since closed. She rented studio space in Brooklyn and expanded her retail to include urban crafts fairs.

She began to experiment with glazes, although she says she has always been more interested in form, “so I want glazes that aren’t going to shout, overwhelm the form; I also need them to be nontoxic. There are glazes that have a surface interest, and those are not what I use, and bright colors aren’t my thing.” 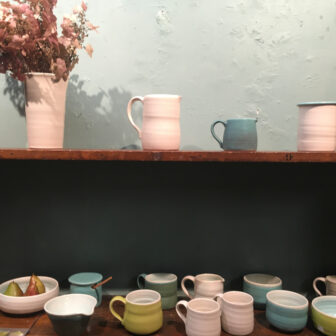 “Clay has a kind of magical aspect to it,” Piazza explains

In each locale, the type of kiln — a word she pronounces in its original, Dutch form, as kil — determined how the pottery looked. “The gas-fired kiln made my surfaces earthier, with bits of color as accents,” she explains. “Working with an electric kiln, as I do now, is more — well, the kiln does what it does. It’s difficult to get a gas kiln installed in a non-industrial area, and costly.”

The set up for wood kilns is also tricky, Piazza says, “You have to feed wood into it 24 hours ahead, which means it’s usually run by a group sharing the work, because people need to sleep. There are people who have wood or gas kilns and they rent out space.”

She moved to Beacon in 1999. In Brooklyn, she was renting an apartment, a studio and a storage space. “It was too much,” she says. “Here, we bought a little house and my studio is in an enclosed porch, with storage space in the basement.”

After the move, Piazza introduced her work through craft fairs, such as those at the Garrison Art Center, and local galleries and stores such as Riverwinds; Clay, Wood & Cotton; and ReMade, all since closed, as well at pop-ups. She also set up shop at the Beacon and Cold Spring farmers markets.

That has been curtailed by the pandemic but Piazza says she has been doing well selling online, such as on Etsy (etsy.com/people/ceruleanblue), especially with people who already own her pieces. Missing the connection with her customers and other artists, Piazza agreed to organize the Howland Cultural Center’s most recent holiday show. “It was fun to get out on the weekends and connect with people,” she says. “That’s gone right now, so it was good.”

One thought on “The Artist Next Door: Virginia Piazza”