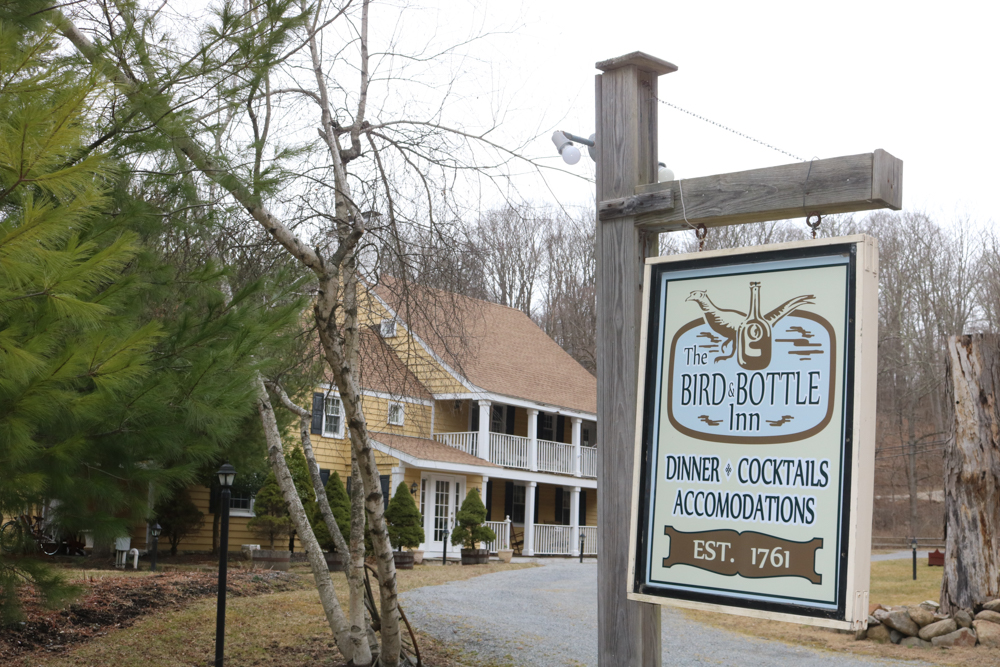 The Bird & Bottle Inn sits at the intersection of Indian Brook and Old Albany Post roads in Garrison. (Photo by Michael Turton)

The Bird & Bottle Inn, a tavern that dates to before the Revolutionary War, has undergone its fair share of reboots over the years. Now a Beacon couple — one part history buff, another part restoration specialist — plans to have the Garrison landmark up and running again this year after some TLC.

Marjorie Tarter, who co-owns the Hudson Valley Marshmallow Co. in Beacon with her fiancé, Brendan McAlpine, organized an investment group that purchased the building a year ago for $1.25 million. McAlpine, whose family owns the Roundhouse hotel and event space in Beacon, and who in 2019 was part of a group that reopened the restored Beacon Theater, is lending his expertise.

After buying the 8-acre property in February 2020, Tarter, who also owns the Wonderbar cocktail lounge adjacent to the Beacon Theater, and McAlpine were set to begin renovations when you-know-what hit a month later.

Tarter said this week that she wrestled with the idea of opening last year for outdoor dining along Indian Brook, “but people have an expectation for the Bird & Bottle. I want them to see that when we do come back, we’ve invested the time and effort to give her the care she needs. We want to restore her to her glory.” 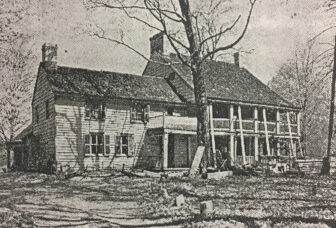 The building in 1940, after years of neglect (Putnam History Museum)

Tarter, who served on the board of the Beacon Historical Society, said she’s always been fascinated by local history, and “the Bird” is steeped in it.

The structure was built near what is now the Old Albany Post Road by John Warren as a home in the mid-18th century and then, in 1761, converted by his son, Samuel, into a stagecoach stop known as Warren’s Tavern.

According to Historic Houses of the Hudson Valley, the tavern “was a welcome sight to weary travelers” and became a popular stopping place on the road between New York City and Albany. The tavern was commandeered by the Continental Army during the Revolutionary War as a regional headquarters for Gen. George Washington and, then, according to Historic Houses, attained its greatest renown after the war with the building of the Highland Turnpike, which ran parallel to the Post Road and ended at the tavern — by then known as Nelson’s — and greatly increased highway traffic.

The building was sold twice in the mid-1800s, as the introduction of the steamboat and railroad left less traffic and fewer customers for a hotel and inn. In the 1830s it was purchased by Justus Nelson, who converted it into a residence and built a grist and lumber mill on the banks of Indian Brook. His son, James Nelson, in 1882 overhauled the homestead. “One improvement has suggested another until enough work has been done to almost build a new house,” according to a contemporary account.

James’ son, also named James, decided to become a minister and sold the building and mill in 1916 to Rhinelander Waldo, a former New York City police commissioner who during his lifetime purchased some 2,000 acres in the Highlands. But he abandoned the building and, in 1938, a group of 31 residents formed the Garrison Highlands Corp. to buy it. Two years later, they sold it to George Perkins, who operated Glynwood Farm and was the president of the Haldane school board.

The earliest tavern in the Highlands was probably the log cabin built about 1730 along what is now the Old Albany Post Road by John Rogers, who leased a tract from the Philipse family that ran south from the present site of the Bird & Bottle to the Westchester County line.

“Rogers was always sure to have a traveler for the night if he reached the house in the middle of the afternoon, as no one ever left on his journey after that time owing to the danger of traveling through the Highlands after night and the difficulty of threading such a wild, mountainous and solitary path,” wrote William Blake in his 1849 History of Putnam County.

He restored the building and named it The Bird & Bottle Inn. The inn became a hot spot, visited by Hollywood elite such as Joan Crawford and Veronica Lake and, in 1954, earned a “superb dining distinction” award from Holiday magazine.

Most recently, Elaine Margolies bought the building at auction in 2004. It was closed from 2010 to 2015, when it was purchased by caterer Pamela Resch.

After the pandemic shutdown last year, Tarter and McAlpine decided to use the downtime to expand the scope of their renovations. Their plans now include a restaurant and lounge (with historic taproom) and indoor and outdoor seating. On the exterior, the signature yellow paint will remain.

“We’re not reinventing the property,” said McAlpine, whose Roundhouse project became an anchor for East Main Street in Beacon after it opened in 2012. “It just needed some love — to be taken apart and put back together.” 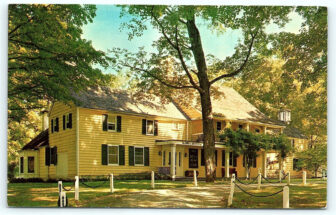 An undated postcard photo of the inn

A tented patio will be used as an event space for up to 150 people and, during a later phase, a cottage and part of the main building will be renovated with guest accommodations.

The couple hopes to open the event and dining space — likely outdoors, at least to start — later this spring. The menu will be “farm-to-table,” with Adam Sternberg, the chef at Wonderbar in Beacon, on board as executive chef.

Tarter’s enthusiasm for the project and its history is readily apparent.

“If those walls could talk, just imagine the people who stopped and had a meal there,” she said. “It’s got so many ties to major historical figures. I can’t wait to tell the stories and serve people a really good meal.”

6 thoughts on “Another Go for Bird & Bottle”