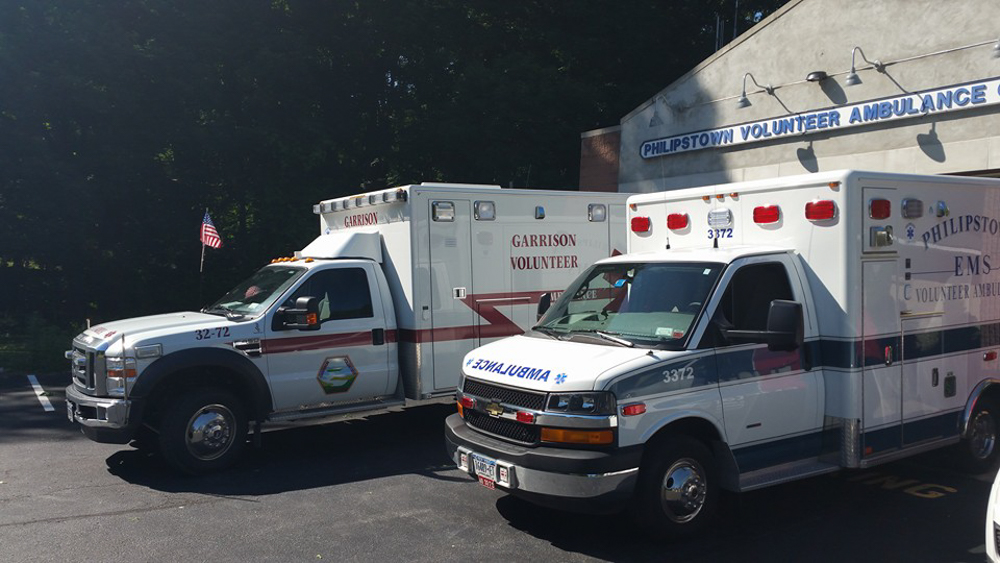 The Garrison and Philipstown ambulance corps are each negotiating their annual contracts with the Town of Philipstown. (PVAC photo)

Supervisor Richard Shea said on Wednesday (Feb. 3) that the contract with the Garrison Volunteer Ambulance Corps and First Aid Squad is ready to sign except for a “small technical” request from the corps.

However, disputes dogged the Philipstown Volunteer Ambulance Corps (PVAC) contract, over what town officials view as oversight but PVAC members see as control of their independent organization.

Without a contract soon, Steve Sherman, a PVAC representative, said on Monday (Feb. 1) the corps can only continue “for another couple of weeks before our operating money runs out,” which means “Philipstown is at serious risk of losing its emergency ambulance service.” Yet, he asserted, Town Board members “seem determined to run us into the ground.”

Shea responded on Wednesday that resolving the dispute “is up to the PVAC. I am confident they will realize that the Town Board is only meeting our mandate for oversight.” Sherman said on Monday that the PVAC had submitted a counterproposal and was waiting to hear from the Town Board.

Both ambulance corps are nonprofits staffed by professional emergency medical technicians as well as volunteers. The PVAC covers the north end of town and the GVAC covers the south.

According to Putnam County data, the PVAC responds to 97.5 percent of calls and the GVAC to 96.5 percent — rates that county emergency services leaders say are exemplary.

Typically, GVAC and PVAC contract ratification occurs routinely, with each new agreement replicating the previous one, except for updates to the sums.

According to Putnam County data, the PVAC responds to 97.5 percent of calls and the GVAC to 96.5 percent — rates that county emergency services leaders say are exemplary.

This time, however, things went off track in November after the Town Board sent copies of the 2020 contracts to Stephen Gaba, the town attorney, to review. He noted that both failed to comply with various provisions of state law and drafted revised versions for 2021.

The PVAC and GVAC balked at the changes.

After the Town Board heard their objections at a Dec. 22 workshop, it revised the drafts and returned them to both corps in mid-January.

Sherman said the PVAC finds the latest version, like its predecessor, “unacceptable.” He accused the Town Board of seeking “complete oversight” of the organization, even though “we have a long and proven record of excellence and professionalism.” He also said the Town Board is “misinformed about many aspects of how we operate,” and prone to “making unfortunate assumptions and jumping to wrong conclusions.”

Shea said on Jan. 27 that the proposed contracts allow “sensible oversight of public funds. The Town Board is accountable to New York State. More important, is our accountability to the taxpayers of Philipstown.”

At the December meeting, Gaba said that under the prior contracts, there was no oversight of the ambulance corps by town authorities. He recommended that the PVAC and GVAC provide rosters of their officers annually for Town Board approval so that “you know the town is being represented in a way you want.”

But Michael Liguori, a PVAC attorney, called sign-off on officers a “non-starter.”

The 2020 contracts defined both corps as independent contractors “not subject to any direction or control in any manner by the town, except as expressly conferred by law.”

Both ambulance corps bill patients or their insurers but under state law, billing is supposed to come through the town, according to Gaba. Ambulance corps “can’t bill on their own,” he said. “When the money comes in, it belongs to the town.”

Philipstown can turn over billing and collection to the corps but the contracts must spell that out, Gaba said.

Liguori said the PVAC might accept that change, but not for 2021 unless Philipstown wants to close the gap between the corps’ $520,000 budget and the $356,060 provided by the town.

The previous contracts also did not address what happens to an ambulance purchased with town funds if the corps disbands.

Ambulance purchases are “directly funded by the taxpayers of Philipstown,” Shea said, and if one is going to be sold, the town only wants “the right of first refusal to buy back” what “we have already paid for.”

Gaba proposed that in such cases Philipstown be given the right to buy the ambulance for $1. Otherwise, he said, the town could spend a large sum on an ambulance only to see it go elsewhere. “You don’t want to interfere with the day-to-day operations of the ambulance corps,” but contracts need to anticipate such situations, he said.

During the December workshop, Shea said the PVAC had not informed the Town Board that it was “selling an ambulance that, five years ago, we funded through taxpayer money,” or that it had recently acquired a new one.

He elaborated on Jan. 19 in an email. Ambulance purchases are “directly funded by the taxpayers of Philipstown,” he said, and if one is going to be sold, the town only wants “the right of first refusal to buy back” what “we have already paid for.”

In December, Liguori said that the idea ambulances “are owned by the town is not correct.” Moreover, he said, the corps needs to “sell them, trade them in, do what we do, because we know what we’re doing.”

Sherman said the new ambulance has four-wheel drive, “which any resident on a hilly dirt road in winter will be grateful for.” In fact, he predicted, all residents will probably “be delighted to know that we have upgraded.”

The contract debate extends to mutual aid, or a system that obligates neighboring agencies to respond with assistance if dispatched.

The old contract states the PVAC “shall not be precluded from providing ambulance services” in southern Philipstown or “areas outside the town.”

Sherman, who is also president of the North Highlands volunteer fire department, said that Putnam Valley’s volunteer ambulance corps was recently down to a single ambulance, while Kent wrestled with staffing problems. The PVAC teamed up with them in a five-month agreement that ended Dec. 31. With a spare ambulance “always ready to roll, we were never lacking in local emergency coverage,” Sherman explained. “We helped our neighbors in their time of need as they would and will do for us if we ever need it.”

At the December workshop, Shea and other Town Board members questioned the PVAC’s involvement in Kent and Putnam Valley.

PVAC President Chris Tobin told them that the arrangement “worked and it cost us no extra money.” Tobin also noted that under a Putnam County mutual-aid pact, the PVAC must answer calls outside its territory if it is in the best position to do so.

But Shea and other Town Board members cautioned that municipalities could take advantage of Philipstown’s willingness to fund its ambulance services.

“If we’re so active that we’re enabling Kent to not meet their responsibilities and it’s coming back on the Philipstown taxpayer, it’s something we need to address,” Shea said. “If it’s mutual aid, it’s one thing. But it feels like it’s not mutual.”