Kevin McConville, a Cold Spring resident and former chief of the Metropolitan Transportation Authority Police Department, announced on Thursday (Feb. 4) that he plans to challenge Sheriff Robert Langley Jr. for his job in the fall.

McConville, 63, said in a statement he plans to pursue the endorsement of the Republican and Conservative parties. He is the chair of the Philipstown Republican Committee. Langley is a Democrat.

McConville retired from the MTA in 2008. During his tenure overseeing the 770-member force, he created the Interagency Counter Terrorism Team to address terrorism, according to his announcement. He also served as a member of the governor’s Homeland Security Team. For the past 12 years, he has been the director of security emergency management at a local health care facility. He began his career in law enforcement as a Cold Spring police officer. 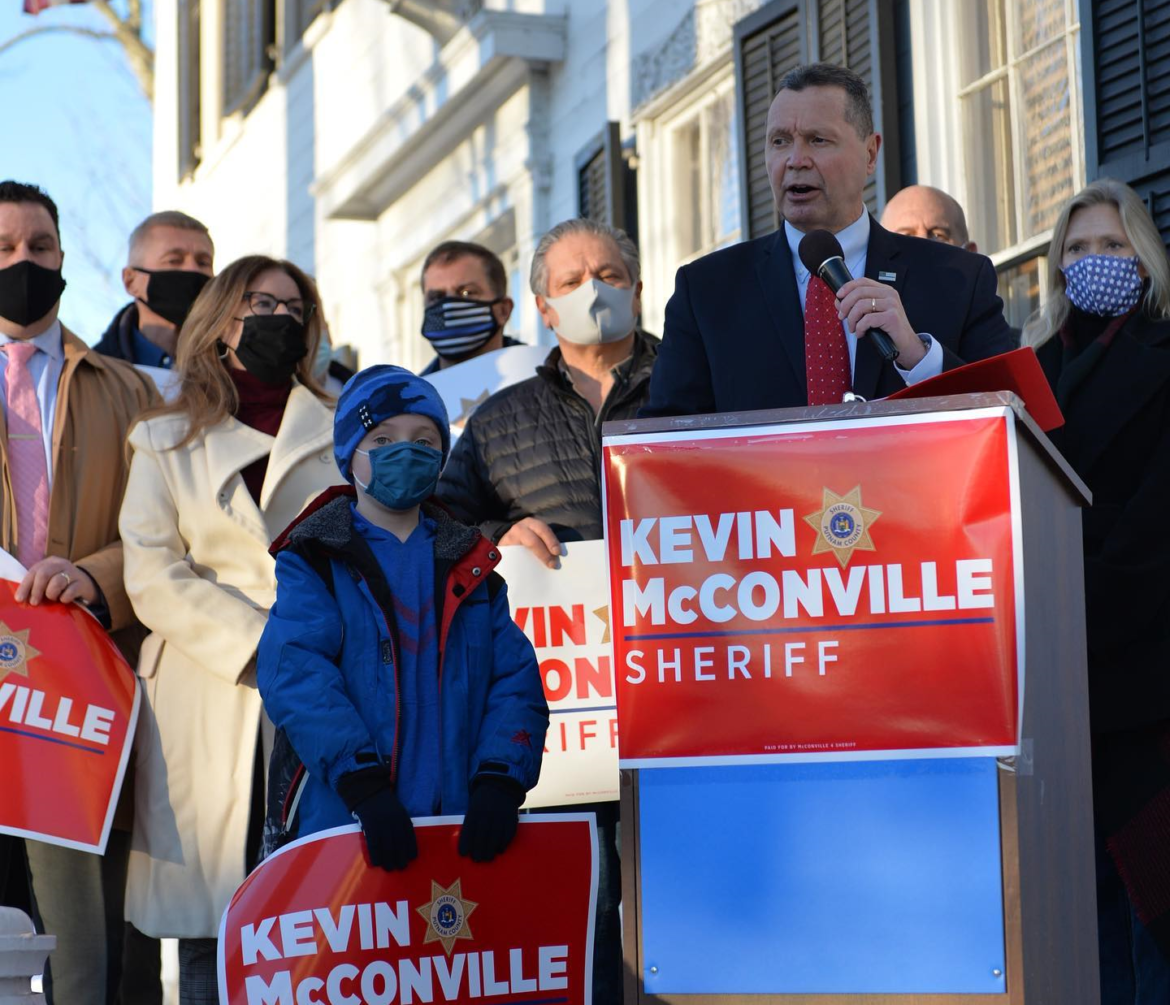 McConville announces his campaign on Feb. 4 on the steps of the Putnam County Historic Courthouse in Carmel. County Executive MaryEllen Odell appears to the left. (Campaign photo)

“It is time to have a responsible, accountable and efficient law enforcement leader, one that manages the budget and the department,” he said in the statement. “The role of the sheriff is not about politics, it is a hands-on job that requires the knowledge of how a law enforcement agency works and how to do it effectively and efficiently, provide support and training to your personnel and excellent service to your communities.”

“Let’s give our deputies and corrections officers a leader, one who isn’t afraid of transparency and fiscal accountability,” he said. “You have to be accountable, responsible and able to work with everybody. [The MTA police] worked with everybody — local and county police departments, as well as state and federal agencies, during my time as chief.”

The financial management of the Sheriff’s Department will likely be an issue in the race. Langley has been under fire from Republican members of the Putnam County Legislature for overtime spending, although his predecessor, Don Smith, also spent heavily on overtime. In 2013, McConville criticized Smith for his financial management, accusing the then-sheriff of increasing overtime spending over the previous decade by 120 percent.

The Putnam County Democratic Committee on Jan. 10 endorsed Langley for election to a second, 4-year term. A resident of Philipstown, he was elected in 2017, narrowly defeating the Republican incumbent, Smith, who had been sheriff for 16 years.

McConville has run for Putnam County sheriff twice. He was the Democratic candidate in 2009 against Smith and challenged Smith again in 2013 in the Republican primary. In 2017 he endorsed Smith in his race against Langley.

McConville said in 2013 that he has always been a Republican but switched parties in 2009 “because I felt I would have gotten lost running as a Republican with so many other people vying for the line.”