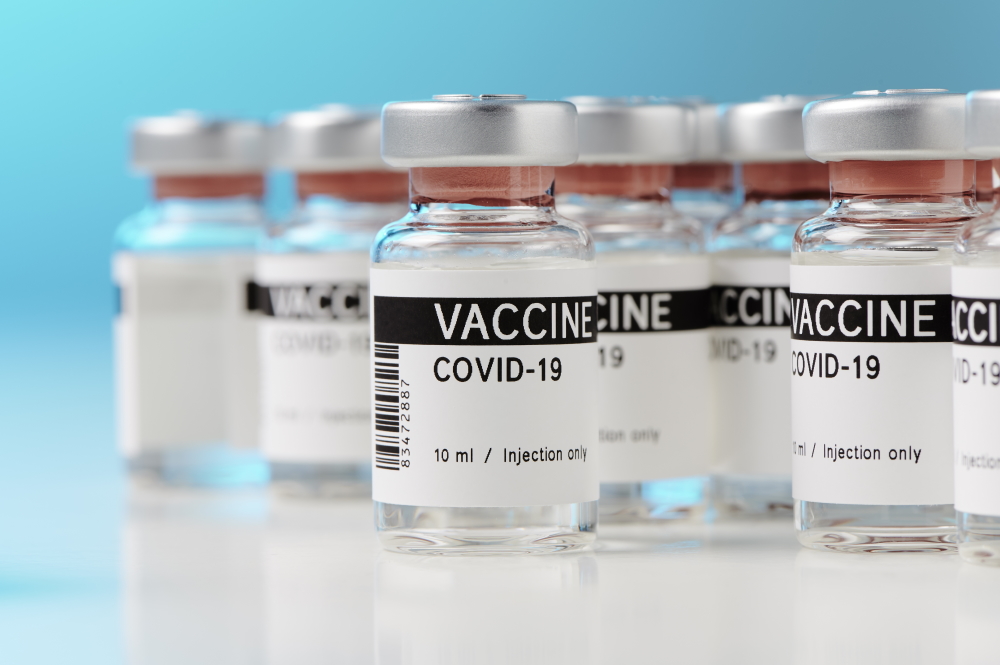 ■ The state is opening 35 pop-up vaccination clinics inside churches, community and cultural centers and public housing complexes this week to boost the number of blacks and Latinos getting shots, Cuomo said on Feb. 3. An estimated 25,000 people will receive first doses at the clinics, including ones in Newburgh, Peekskill and Poughkeepsie, said Cuomo. “COVID has killed Black and Latino New Yorkers at a higher rate and that is why these community-based sites are one of New York’s vaccine priorities,” he said.

■ Cuomo said on Feb. 2 that the state is giving local governments of option to add restaurant workers, cab drivers and facilities serving the developmentally disabled to the list of people eligible to receive vaccinations because the state is expecting an increase in its allocation of doses from the federal government.

■ The site where Putnam County stores vaccines has been named a “critical facility” as the snowstorm hitting the Hudson Valley on Feb. 1 threatens to cause power outages. Each of the two vaccines currently approved for use are shipped frozen and must be kept refrigerated until ready for use. “Even if there are widespread power outages, we will be able to keep the vaccines refrigerated,” said County Executive MaryEllen Odell said on Monday. “We’re not going to let a single dose go to waste.”

■ Melissa DeRosa, secretary to Cuomo, said on Jan. 31 that the state was postponing mass vaccination clinics scheduled for Feb. 1 at Westchester County Center in White Plains and other locations due to a storm expected to drop a foot or more of snow. Everyone with an appointment will receive a text or email with rescheduling information, DeRosa said.

■ On Jan. 29, the Putnam County Health Department said that more than a dozen staff and managers at Foodtown in Cold Spring received their first dose of the COVID-19 vaccine during a clinic held on Jan. 28 at the Philipstown Recreation Center.

■ A state-run vaccination site is coming to Yankee Stadium, Cuomo said on Jan. 29. With a seven-day average of 7 percent, the Bronx has the highest positivity rate of New York City’s five boroughs as of Friday.

■ Johnson & Johnson announced on Jan. 29 that its single-shot vaccine was 66 percent effective overall “in preventing moderate to severe COVID-19 28 days after vaccination” and 72 percent effective in the U.S. The company also said it intends to seek emergency use authorization from the federal government in early February. If granted, it would become the third vaccine approved in the U.S., along with Pfizer-BioNtech and Moderna. Each of those vaccines requires two shots given weeks apart.

■ The vaccine allocation will increase next week for New York and other states under a plan announced on Jan. 26 by President Biden. New York, which has been averaging 250,000 doses a week, will receive 16 percent more, Cuomo said on Jan. 27. The federal government will also allocate in three-week increments, instead of telling states how many doses they will receive each week. “So now, at least we can come up with a three-week plan,” said Cuomo.

■ Mid-Hudson Region hospitals, including in Dutchess and Putnam, had vaccinated 70 percent of their workers, the third-lowest rate of the state’s 10 regions, Cuomo said on Jan. 27. Vassar Brothers Medical Center in Poughkeepsie (93 percent) and NewYork-Presbyterian Hudson Valley Hospital (90 percent) in Cortlandt Manor had the region’s best rates. Northern Dutchess Hospital in Rhineback (65.1) and Putnam Hospital Center in Carmel (65.6) were among the lowest.

■ On Jan. 26)at 4:23 p.m. Dutchess sent out an email notification of available vaccine appointments for Jan. 28 at the former JCPenney store at the Poughkeepsie Galleria. Three minutes later, at 4:26 p.m., the county sent a second email: “All appointments filled within minutes. All appointments are now booked.” The county had just 600 vaccines to distribute this week. “Until greater supply is available, we urge everyone to try to remain patient and keep up the safety measures to prevent the spread of COVID-19,” said Marc Molinaro, county executive.

■ On Jan. 25, Dutchess County provided 60 residents with intellectual and developmental disabilities (IDD) their first dose of vaccine through a mobile pop up site at New Horizons Resources in Pleasant Valley.

■ Cuomo announced on Jan. 25 the launch of a hotline where residents can report vaccine-related fraud. Call 833-829-7226 or email [email protected] 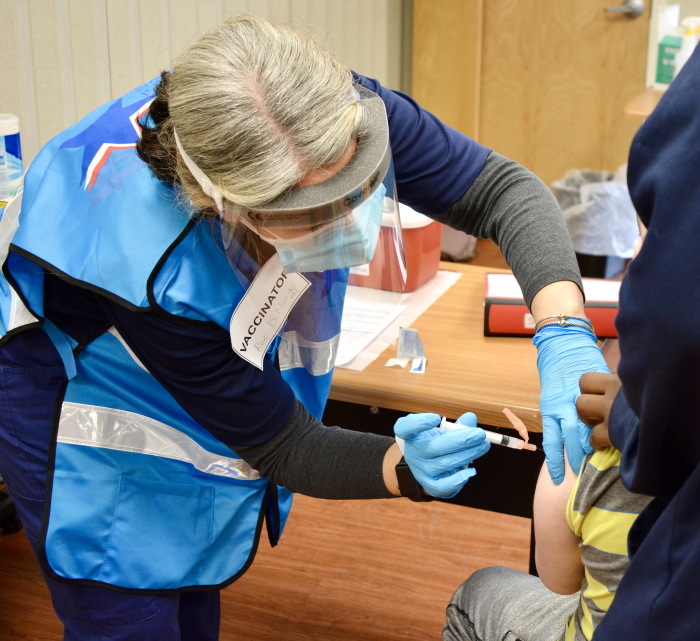 Roz DiNardo, a member of the Medical Reserve Corps of Dutchess County, administers a vaccination on Jan. 25 to one of 60 residents with intellectual and developmental disabilities. (Dutchess County photo)

■ The Hastings Center, a health policy and ethics think tank based in Garrison, on Jan. 21 issued a report on guidance for vaccine allocation. Among its recommendations is an alternative to blunt age cutoffs (“Recent efforts to widely expand vaccine access to all people age 65 and older could crowd out those at highest risk unless there is special attention to ensuring access for people 75 and older and people with multiple co-morbidities”) and the prioritization of home health workers as front line health care workers.

■ On Jan. 20, Molinaro, county executive for Dutchess County, said that residents can subscribe to email updates on vaccine appointment availability at dutchessny.gov. The county has received more than 7,000 calls about vaccinations in the past week, he said. “Please don’t call the health department looking for an appointment,” said Molinaro.

■ In a news release dated Jan. 19, Putnam County Executive MaryEllen Odell said that, while Drug World of Cold Spring was one of several pharmacies in Putnam selected by the state to vaccinate seniors, Rite Aid dropped out of the program and its dosages were transferred to the Putnam County Department of Health.

■ On Jan. 19, Cuomo announced the launch of a COVID-19 Vaccine Tracker Dashboard that shows total doses received by the state, a breakdown of first or second doses and the number of residents receiving the first and second doses in each region. The Mid-Hudson Region, which includes Dutchess and Putnam counties, had administered 83,917 of its 111,925 doses, or 75 percent, as of Tuesday. The dashboard’s data will be updated daily.

■ On Jan. 18, Cuomo released a letter asking Dr. Albert Bourla, chairman and CEO for Pfizer, if New York can buy the company’s vaccine directly, bypassing Operation Warp Speed, the federal distribution program. Cuomo and other governors accuse the federal government of expanding eligibility for vaccines without providing more doses. New York’s most recent allocation is actually less, said Cuomo. “The federal administration essentially opened up a floodgate while cutting our supply — leading to confusion, frustration, and dashed hopes,” he said.

■ Nearly 330,000 New York residents received their first vaccination dose during the week of Jan. 11, about a tenfold increase since the state begin giving shots the week of Dec. 14, Cuomo said on Jan. 18. Providers in the Mid-Hudson Region had administered 70 percent of their allocation of the two-dose Pfizer-BioNTech and Moderna vaccines as of Monday, compared to 83 percent in the Southern Tier Region, 81 percent in the North County, 77 percent on Long Island and 65 percent in New York City.

■ As of Jan. 17, NewYork-Presbyterian Hudson Valley Hospital in Cortlandt Manor had vaccinated 89.2 percent of its workers, the highest rate for hospitals in the Mid-Hudson Region, according to the state. Putnam Hospital Center in Carmel had the lowest rate of workers vaccinated, 43.6 percent; Vassar Brothers Medical Center in Poughkeepsie had the third-lowest, 47.2; and Montefiore St. Luke’s Cornwall Hospital in Newburgh tied with Ellenville Regional Hospital for the fourth-lowest, 50.9. 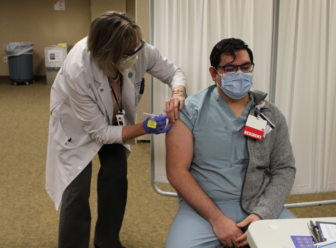 ■ More than 140 people over 65 were vaccinated against COVID-19 during a clinic organized by Drug World on Jan. 15 at St. Mary in-the-Highlands Episcopal Church in Cold Spring. The Rev. Steve Schunk, the church’s priest-in-charge, offered St. Mary’s Parish Hall at no cost. Putnam County has vaccinated more than 900 people so far at clinics in Carmel and Philipstown.

■ On Jan. 15, Cuomo announced that the New York’s “Am I Eligible” website would only book appointments for the state-run mass-vaccination sites, which include the Westchester County Center in White Plains and the Jacob K. Javits Center in New York City. Residents looking for appointments at non-state sites — local health departments, hospitals, pharmacies, urgent care centers, etc. — have to contact those providers directly. Residents should expect a wait of 14 weeks or longer for an appointment at this point, said Cuomo.

■ The Putnam County Health Department vaccinated 307 people, including seniors 75 and older and essential workers, during a clinic held on Jan. 14 at the Philipstown Recreation Center, Odell said. An additional 611 people received vaccines at the Carmel Friendship Center on Jan. 11. “It means the health department now has a location in Philipstown and another in Carmel to administer the vaccine,” said Odell.

■ About 300 people were vaccinated during a clinic held by Dutchess County on Jan. 15 in the former JCPenney space at the Poughkeepsie Galleria. Dutchess also held a clinic at its Department of Health in Poughkeepsie on Jan. 13.

■ On Jan. 5, the state said that it had distributed 911,000 first doses of the vaccine to 3,762 approved providers, including 1,285 medical offices, 802 chain pharmacies and 510 long-term care facilities. Of those, 636 were vaccinating eligible residents, including 104 in the Mid-Hudson Valley, where 549 sites are enrolled.

■ On Dec. 26, the state Department of Health said it had been “made aware of reports that Parcare Community Health Network, an Orange County provider, may have fraudulently obtained COVID-19 vaccine, transferred it to facilities in other parts of the state in violation of state guidelines and diverted it to members of the public — contrary to the state’s plan to administer it first to frontline healthcare workers, as well as nursing home residents and staffers. We take this very seriously and DOH will be assisting State Police in a criminal investigation into this matter. Anyone found to have knowingly participated in this scheme will be held accountable to the fullest extent of the law.”

■ On Dec. 9, Cuomo announced that “the state’s vaccination distribution effort will focus on battling skepticism, include outreach to Black, brown and poor communities, as well as expedited distribution and administration. New York could receive its initial allocation of 170,000 vaccines as soon as this weekend, and expects further allocations in the following weeks…. High-risk healthcare workers, nursing home residents and staff are prioritized first to receive the vaccine, followed by other long-term and congregate care staff and residents and EMS and other health care workers. Essential workers and the general population, starting with those who are at highest risk, will be vaccinated after these initial priority groups.” The vaccine will be allocated on a regional basis, he said, with the Mid-Hudson receiving the third highest number of doses (19,200) behind New York City (72,000) and Long Island (26,500).

■ Cuomo said on Dec. 2 that New York State expected to receive an initial delivery of COVID-19 vaccine doses from Pfizer for 170,000 people by Dec. 15, if all safety and efficacy approvals are granted by the federal government. Additional allocations of vaccines from Pfizer and Moderna are expected later in the month.