The Dutchess County district attorney said on Feb. 4 he would not pursue an investigation requested by Democrats into whether the Republican election commissioner committed perjury.

In a letter addressed to Elisa Sumner, the chair of the Dutchess County Democratic Committee and a former deputy elections commissioner, and copied to Republican Commissioner Erik Haight, District Attorney William Grady said he had not been asked to conduct an investigation by the judge overseeing the case in which Haight allegedly committed the crime. 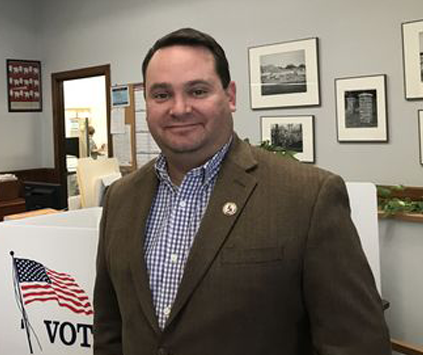 The litigants in the case, which involved an October request to move a voting site from a church in Red Hook to the Bard College campus in Annandale, “had a full and fair opportunity to address the issues, seek sanctions and raise the issue of perjury for allegedly false information provided to the court in any manner” but did not do so, Grady wrote.

The district attorney said he had concluded that “opinion is not perjury…. There is no evidence of perjury in any degree committed in these proceedings.”

In a statement on Feb. 11, Haight said: “Mr. Grady arrived at the obvious conclusion because obviously I didn’t perjure myself, and never have whenever I’ve been put under oath and testified.

“Sumner’s attempt to weaponize the district attorney’s office was a futile attempt to harass and intimidate me but she will never succeed. The rank-and-file Democratic voters of Dutchess County are ill-served by her so called ‘leadership.’ I’m hopeful she stays in her position due to the profound success the Republican Party has had during her tenure.”

Sumner, when asking the district attorney to investigate Haight’s affidavit, had said that “to allow someone in charge of our elections to lie to the court with impunity, without opening an investigation, would be unconscionable.”

Asked for her response to the district attorney’s decision, Sumner wrote in an email: “The Republican DA clears the Republican commissioner for lying to a court in an effort to stop people from voting? Shocking!”

Haight submitted the affidavit before an October decision by a state judge who later asserted that he had misled her about the feasibility of relocating the polling site. According to court documents, Haight said “the election was too close” to make the change without causing confusion for voters.

State Supreme Court Justice Maria Rosa ruled that the site could not be moved. However, 10 days later she reversed her decision, citing the fact that Haight and Soto had agreed the day after her ruling to move a voting site from Red Hook Town Hall to a larger space at a middle school.

The judge wrote that Haight’s sworn assertion “was simply untrue” and ordered the church site moved to Bard.