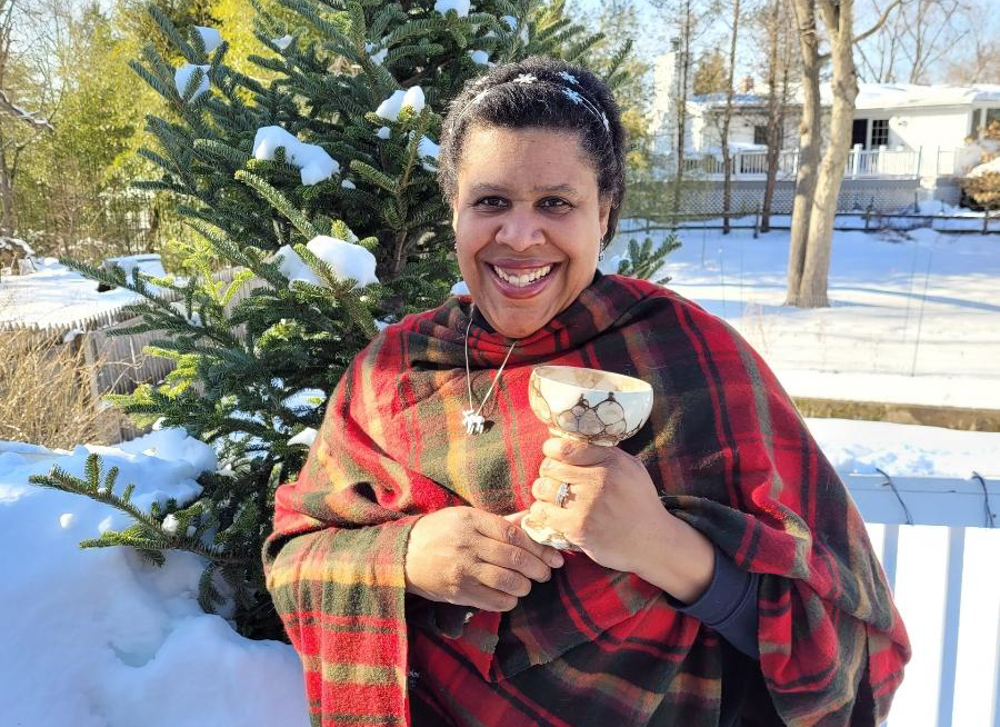 Kim Pitt-Foster, at her home (Photo by Senator Bjorge)

Kim Pitt-Foster discovered the Garrison Art Center through her children. A ceramicist, she is now a board member and cheerleader for the center and helped organize its Chairs Revisited exhibit last fall.

“My son [now 20] has texture issues and I wanted to see if he would touch clay,” she says. “He doesn’t like the rain, but he loves to swim, so there are ways he can find his outlets. I looked at a couple of places and I didn’t like them, then I found the Art Center and the kids fell in love with Lisa [Knaus, the pottery studio manager there], because she was so enthusiastic without any sternness. Lisa was just so effusive, loving and encouraging to my two so-different-to-each-other kids. She can find something magnificent and special about your piece, no matter what.”

Knaus also drew Pitt-Foster back into the studio after many years away. “She made me feel safe to return to pottery,” she says. “I needed a safe, happy outlet.” Pitt-Foster was so impressed, in fact, she joined the Art Center board. “It’s a very nice place, in that you’re appreciated, acknowledged and encouraged to continue,” she says.

After growing up in Manhattan, highlighted by six years spent as a child performer on Sesame Street [see below], Pitt-Foster attended the High School of Music & Art in New York City while spending her summers in the Aaron Copland Music and Arts program in North Salem. “The person who ran it was an ex-colonel, and ran it military-style, but it was liberal at the same time, and that mix was fun,” she recalls.

At Bennington College, Pitt-Foster double majored in photography and theater lighting design, with minors in ceramics and literature. It wasn’t as frenetic as it sounds, she explains. “When you’re being creative all the time, it’s easy. My lighting project was influenced by my outdoor photography; the colors I might have used in my pottery then always came through in the stories I wrote for literature. I was loud and funky and one of three Black people on campus, which is still always the case.”

She never felt that she would become a visual artist, especially since her family’s businesses had been medicine and law. “I toyed with acting, but I wasn’t talented,” she says. “I was shy, a little weird, bossy and loudmouthed.” Following graduation, she worked behind the scenes in film and theater and then for photographer Arnold Newman and designer Vera Wang. “I herniated two discs — wedding dresses are heavy,” she says.

She continued to make pottery but set it aside after she met and married her husband, a marketing executive, becoming a preschool teacher and, then, for 20 years, a stay-at-home mother. “I was the world’s best and worst mother,” she says. “Anything I did, I did it twice: class mom, PTA — the works.”

After following her children’s lead and enrolling in ceramics at the Garrison Art Center, Pitt-Foster jumped back into her pottery. 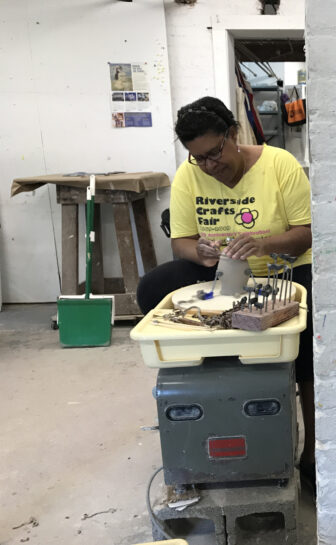 During the pandemic shutdown, she says she discovered “the wonderful world of hand-building. I had been a thrower; it’s the most therapeutic thing, to throw a pot. I don’t have fine motor skills, so my pots are not delicate: They carve their space through the world. I work with certain colors. I like them to kind of glisten and have movement — almost tactile properties — grab your eye a bit, drip, ooze, swirl two glazes which work well and create a third, interesting thing. I like making quirky mugs, with wonky handles which swirl and curl and you have to grab one which fits your hand.

“I’m also doing a lot of hand-building of petals — I make them singly, but put 30 of them together and you get one beautiful rose. I learned the basics of this from my grandmother, Agatha Pitt, who designed wedding cakes and who always had me piping the rosettes. Now I’ve discovered the world of manipulation with my hands: patterning, seeing how the glaze goes into crevices.”

Pitt-Foster’s designs were sold at six stores and galleries before the shutdown; now only two remain open: Archipelago at Home and Kismet at Caryn’s, both on Main Street in Cold Spring.

“Kismet has the flowers and ring holders, which are sold under the name The Potted Moose,” she says, “while Archipelago has lidded things, vases and bowls. I never make duplicates. I’m prolific but I’ve slowed down [because of the pandemic]. I am considering things more. I’m making things for friends and family, while looking forward to what’s next.”

She Did Get to Sesame Street 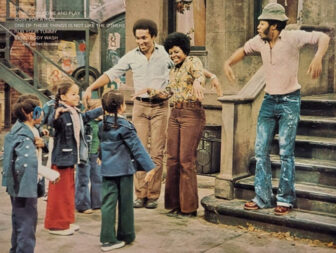 Kim Pitt-Foster, at far left, appeared on some episodes of Sesame Street with her arm in a cast.

Kim Pitt-Foster was one of the first child cast members of the long-running PBS children’s program, Sesame Street, and appeared on the show for six years. Here’s how that came about, as told to Alison Rooney:

“My mother, the queen of never stopping, was a research scientist. Back in the 1960s, she was walking to work, carrying a bunch of textbooks, when she was mugged. The mugger grabbed her purse, but she chased him down. She got her purse back but the books were gone.

“She had written her name in the books and got a ‘We found your books’ call, which turned out to be from the person who founded Sesame Street. They met up, the books were handed over, and the woman asked my mother if she had any children. My mother said, ‘Not yet.’ Then the woman said: ‘We’re just starting this thing called Sesame Street, and when you have a child, get in touch with me.’ Sesame Street started two years after I was born and, at some point, my mother remembered to call, and she was told they were looking for children.

“They were trying to do ethnic diversity and I happened to be very good at sitting quietly, like when Maria [played by Sonia Manzano] was telling the story. I sat and listened to direction, even though I was a wiggler. Then I broke my arm — and that was a jackpot because they liked to show children facing challenges — so I was on it with the broken arm every week. Every cast member signed my cast in their character names; Oscar said something mean but funny.

“I was pulled out of school constantly for the show, even as I got older — I became the older kid who wrangled the younger ones. You’d see kids sitting on other kids’ laps; I was that kid. I was a cast member from age 3 to 8-and-a-half.

“When my kids were little, I looked into finding the programs. I thought it would be funny for them, but my kids didn’t like it. I still have Big Bird’s feathers — when he walked, he shed. My favorite memory is when something went wrong with the lighting and I got bored and went missing. They found me asleep in Big Bird’s nest.”