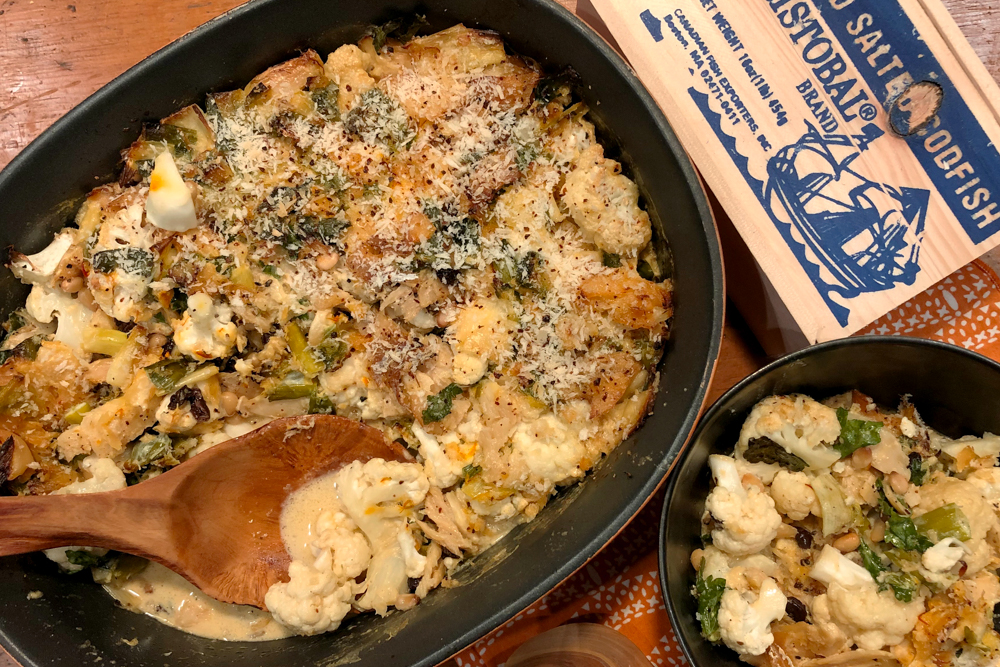 It’s not a pretty fish, the cod. But it is without a doubt one with the oldest and largest economic and cultural/culinary foot- (or better, fin-) print.

Atlantic cod (Gadus morhua) was fished and enjoyed long before the Vikings began economic trade in Scandinavia and its abundance in the coastal waters on both sides of the Atlantic established a cultural acceptance and range far beyond its spartan Norse beginnings.

But it was the preserving of fresh cod by drying and salting that transformed a primarily regional industry into the international marketplace. Salt cod has a potential shelf-life of years, and the cultures and cuisines that had embraced fresh cod adapted their cooking to the dried fish: Scandinavian countries, England, France, Spain and Portugal all have notable and distinctive recipes that celebrate the singular charms of such a humble but useful food.

And by becoming a major commodity in the triangular trade between the Old and New Worlds, salt cod extended its range far beyond the North Atlantic — to the south and east in the Mediterranean and African continent, and again to the south and west in the Caribbean and South America.

The initial preparation and rehydration is easy but requires time: the surface salt must first be rinsed off and the cod submerged in cool, clean water to soak for a couple of hours. The water is changed and the process repeated five or six times to both remove excess saltiness and restore the flesh to the firm, white flakiness that makes it so useful in stews and casseroles.

The soaked and rehydrated fish is then poached briefly in water (or milk) before being finally used in some by-now classic preparations. France’s brandade de morue is a silky puree served on toast. The Greeks flip that equation: the meaty fish is fried and topped with skordalia, a thick sauce made from lots of garlic, pureed with bread, olive oil and almonds.

America is rife with regional recipes for red and white chowders featuring salt cod. In Jamaica, saltfish and ackee (a native savory fruit) is the national dish; in Bermuda, breakfast is saltfish fritters, served with potatoes, avocado, banana and boiled eggs.

Portuguese, Basque and Spanish stews feature bacalao in a tomato sauce with peppers and olives, among other ingredients, as do Italian recipes — particularly those traditional on Catholic holidays, such as the Feast of the Seven Fishes for Christmas or many meatless Lenten meals. Potatoes are a recurring ingredient in many recipes.

This week’s recipe (just in time for Lent!) is a cream-based non-traditional casserole of baccalà and cauliflower with a classically Sicilian spin: the combination of currants, pine nuts, citrus zest and saffron is an enduring legacy and reminder of the Saracen-Arab invasion of the island in the ninth century. The whole lovely mess is topped with breadcrumbs and baked briefly for a golden crust, and is perfect for these endless snowy days. Serve with a green salad for comfort food of a different kind.

1. Heat oven to 425 degrees. Place the desalted cod in a large saucepan with milk, cream, scallions, garlic and bay leaves and bring to a simmer. Cook, simmering gently, for about 15 minutes, until cod is tender and easily flaked. (Test a small piece.) While cod simmers, combine cauliflower, parsley, lemon zest, drained currants and pine nuts in a large bowl.

2. Remove cod from simmering cream with a slotted spoon to another bowl. Allow the cream to simmer, add the saffron, and continue to cook, thicken and reduce. Flake the fish into smallish bite-size bits and add to the bowl with the cauliflower.

3. When the cream has thickened to a heavy sauce, pour it over the cod-cauliflower mixture, toss gently to combine and dump all into a 3-quart casserole. Top with breadcrumbs and bake in preheated oven for 20 to 30 minutes, until lightly browned. Serve warm with a green salad.

* This task is simple but will take a day. Rinse the surface salt from the cod under cold running water. Soak the filets in cold water in the refrigerator for at least two hours, drain and repeat in fresh cold water. Repeat at least four to five times before draining and patting the cod pieces dry.