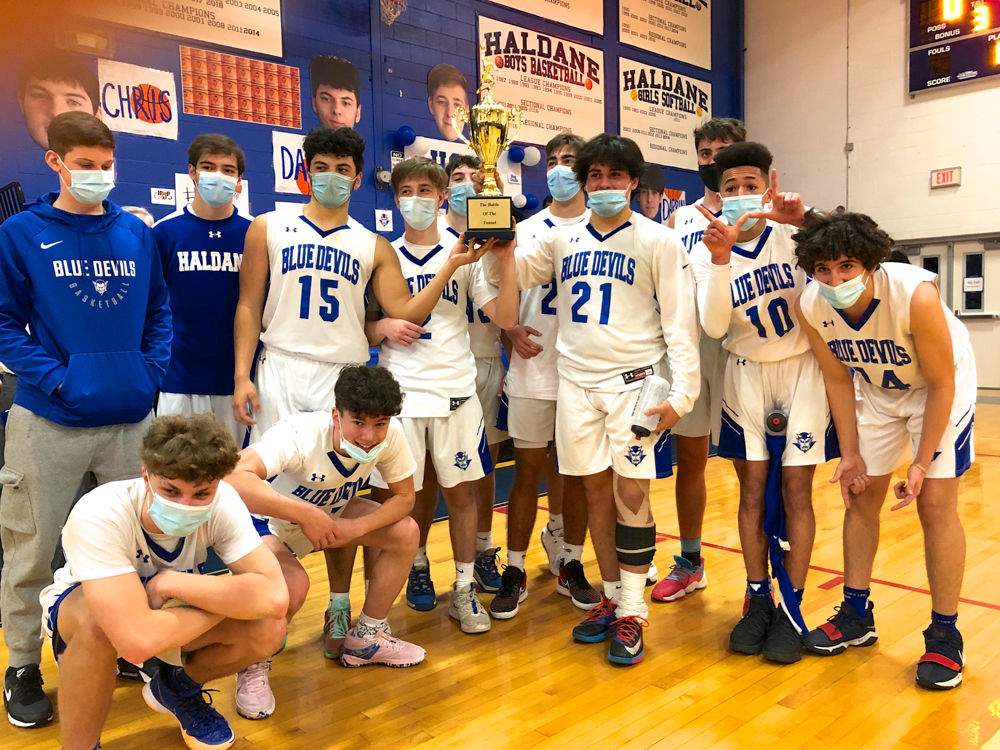 The Blue Devils won the second annual Battle of the Tunnel on Feb. 12 at Haldane. (Photos by S. Pearlman)

Haldane and Beacon face off in first games of season

The Haldane and Beacon High School boys’ and girls’ basketball teams each opened their seasons with home and away games against their Highlands rivals, with the Haldane boys winning at home and the Beacon girls winning both contests.

The boys are scheduled to match up again tomorrow (Feb. 20) at Beacon.

The boys’ game on Friday (Feb. 12) was designated the second annual Battle of the Tunnel, which Beacon won last year, 60-57, in front of packed gym at Haldane.

This year was dramatically different, with the teams playing before mostly empty stands because of pandemic restrictions. The Blue Devils held on for a 70-55 victory and reclaimed the trophy. 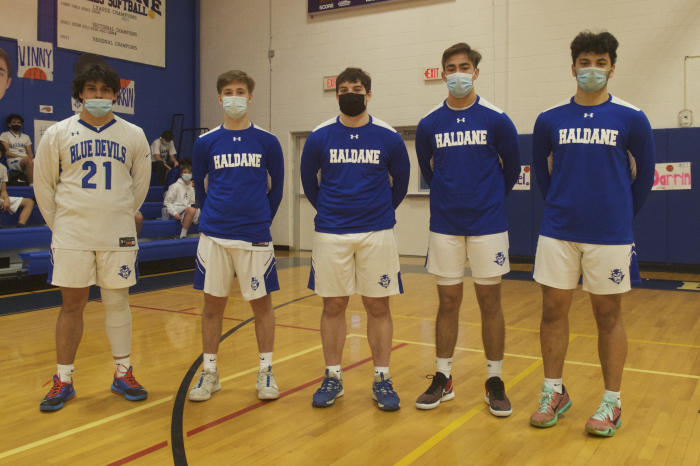 The Haldane boys defeated Millbrook on Saturday (Feb. 13), 75-62, and remain undefeated after victories this week over North Salem and Putnam Valley in a season shortened to 12 games by the COVID-19 shutdown.

Against Beacon, an experienced Haldane team moved the ball well and finished around the basket. Dan Santos led Haldane with 20 points, Soren Holmbo had 19, and Matteo Cervone added 16. Darien Gillins led Beacon with 16, Leo Gecaj had 14 and Jack Philipbar added 10.

“It was an amazing night, our first game back,” said Haldane Coach Joe Virgadamo. “We have a nice rivalry with Beacon, so it was nice to get that trophy in our hands. It was fun to see our guys back on the court.”

“Haldane has five seniors, and returns other players with experience,” noted Beacon Coach Scott Timpano. “Soren Holmbo was extremely impressive. They’re big and they got up and down the floor well. Our four sophomores — that was their first varsity minutes.” 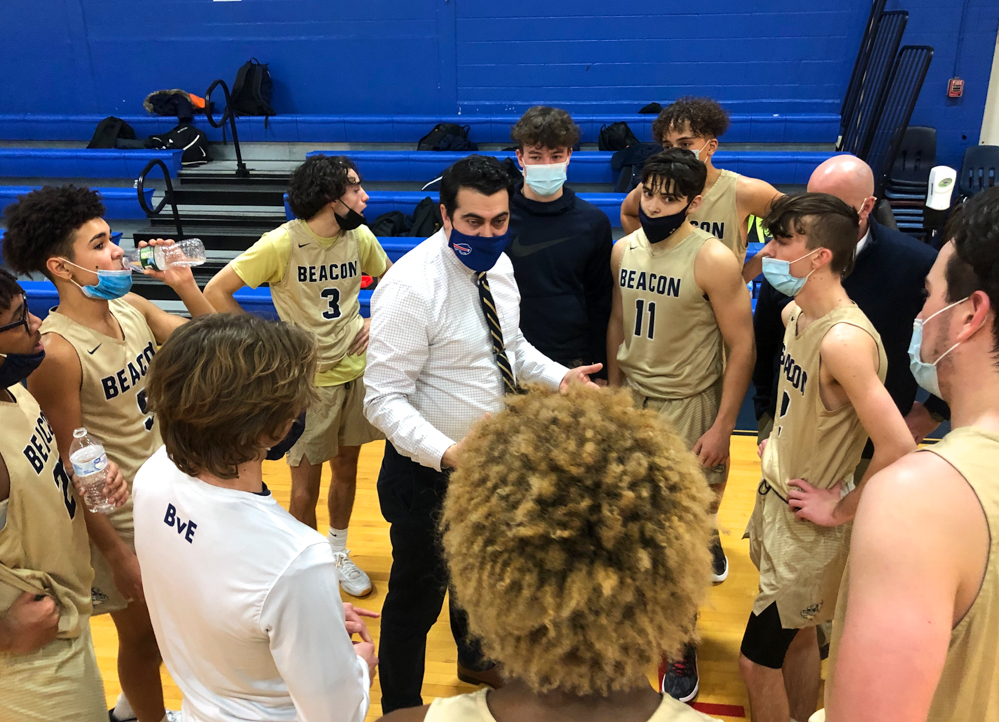 Beacon Coach Scott Timpano talks strategy with this team during a timeout on Feb. 12 at Haldane.

“We’re playing good basketball,” Virgadamo said. “We are balanced, sharing the ball. They know it could end at any minute, and they’re leaving it all on the court.

“We played four games in six days, and our defense and hustle has been amazing,” he added. “What everyone has done to make this happen is just amazing.”

After the Saturday game at Beacon, Haldane will host North Salem on Tuesday (Feb. 23).

Following its loss to Haldane, Beacon dropped a pair of games to Arlington, falling 54-32 on Monday (Feb. 15) away and 54-44 at home on Wednesday.

“Arlington is a big, physical team, and they outmanned us in the paint,” Timpano said. “We struggled with rebounding and allowed way too many second-chance points.”

Timpano said his team made adjustments before the rematch. “It was a close game at halftime, and stayed close until the final minutes,” he said. “For a young team I feel like the kids follow the plan and showed some nice improvement.”

The Bulldogs are scheduled to visit John Jay today (Friday) before their game against Haldane.

The Beacon girls’ team twice defeated Haldane to open its season, winning at home on Friday (Feb. 12), 47-30, and again on Saturday morning in Cold Spring, 44-36.

In the Friday game, Beacon eighth-grader Reilly Landisi made her varsity debut with 17 points, while freshman Devyn Kelly had 11. Tianna Adams had nine points and eighth-grader Daveya Rodriguez had eight points and grabbed 10 rebounds. 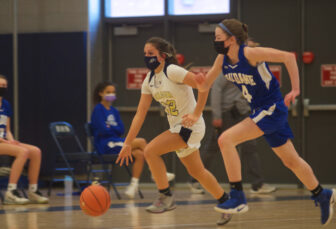 “For only having had six practices, we played hard and smart,” said Beacon Coach Christina Dahl. “We had a slow first quarter, then we picked it up, and we matched up well with them. I was very pleased with the way we played.”
In the Saturday game, Kelly had 14 points to lead the Bulldogs, Adams added 10 and Landisi and Rodriguez each had eight.

This past week, Beacon lost a pair of lopsided games (74-6 and 60-10) to much larger Arlington High School to fall to 2-2. The teams would normally not play each other but schedules have been rejiggered because of COVID-19 restrictions. 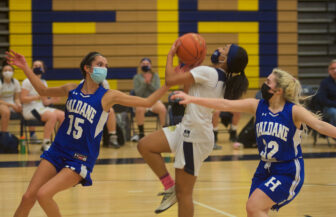 Haldane was scheduled to host Peekskill on Saturday and Putnam Valley on Monday before traveling to Peekskill on Tuesday.

Spectators are not allowed, but Haldane’s home contests are livestreamed at events.locallive.tv/ and select Beacon games can be seen via beaconk12.org/athletics.